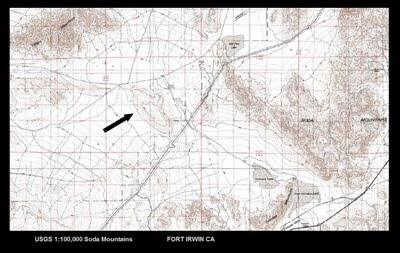 The US Army's National Training Center at Fort Irwin sits in the middle of the Mojave Desert in the southeastern corner of California, where temperatures can exceed 110o Fahrenheit in the summer and drop below 15o Fahrenheit in the winter, with fierce winds, little rainfall or water, and little vegetation.

Deep wadis cut through the desert floor, deep enough to swallow an armored vehicle, and vast dry lakes stretch for miles underneath the steep sides of brown, treeless mountains.

Since the 1970s, the NTC has been the premiere training area for the US Army, where huge force-on-force training battles take place across the severe, unworldly terrain. Nearly every contour line and terrain feature in the vast training area has a colorful nickname for ease of reference among the soldiers who participate in these intense military exercises, each of them loaded with ominous implications and memories of past defeats and victories from the hotly-contested maneuvers that stretch back through the years.

Many of the names are descriptive of the incredibly varied terrain, while others clearly refer to military aspects of the area in question. Some of them include the Valley of Death (or the "VOD" for short), Siberia, the Washboard, the Chili Bowl, the Iron Triangle, the Furlong, the Peanut, the Wormhole, the Goat-Trail, the Khyber Pass, and the Racetrack.

Like the rest of the Mojave Desert, there is clear indication of ancient volcanic activity, and many of the most imposing terrain features bear witness to the powerful forces of volcanism. The map segment above shows a familiar section of the NTC for those who have trained there, dominated by a huge dark glowering massif known as "The Whale" (small black arrow points to this terrain feature). Note that in this topographic map, each square represents a kilometer, which gives some indication of the size of the Whale (over four kilometers in length), and each contour line indicates twenty meters in elevation.

The Whale sits in the center of an enormous ancient crater, broad and shallow and ringed by cliffs, a fact which can be perceived by looking at the expanding concentric rings of the contour lines that encircle the Whale in the map above. The Whale itself is a huge volcanic extrusion of solidified magma that must have oozed out after the crater itself was formed. Perhaps the area was under water when this took place.

According to the hydroplate theory of Walt Brown, the immense friction produced by the sliding of the continental plates after the initial rupture event during the flood created the magma underneath the surface which escaped to the earth's surface through cracks and faults, producing volcanic activity. Such friction would have been particularly intense along the leading edge of North America as it slid away from the breach that is today marked by the Mid-Atlantic Ridge, creating the numerous volcanic terrain features that mark the Mojave Desert and other parts of Southern California.

Dr. Brown also explains why other theories have some difficulty explaining all the aspects of magma and volcanoes:

A key fact to remember is that at depths greater than 5 miles, pressures are so great that all empty channels through which magma might rise should be squeezed shut. Even if a crack could open, the magma must rise through colder rock. unless this happened quite rapidly, magma would cool, solidify, and plug up the crack. Also, heat diffuses. So what concentratedenough heat to create the "hot pockets" and melt the vast volumes of rock that erupted in the past? 93-94.

The National Training Center's stark beauty cannot fail to make a lasting impression on those who spend any amount of time there, like the rest of the Mojave itself. I vividly remember riding across its vast open spaces in the turret hatch of my Bradley, part of a long columns of armored vehicles winding their way down from the windswept mountains and seeing the huge Central Corridor stretching away into the distance below me, or driving for hours across the valley floor at night in the eery green light of the night vision goggles. While the harshness of the desert and the grueling pace of the training inspired one soldier to scrawl graffiti declaring "The NTC is the Devil's ashtray," it is also home to the occasional desert flower and the plodding desert tortoise, and vistas that are perhaps unparalleled anywhere else on earth.

In addition to all that, the scars of its ancient volcanic history provide an important clue to the forces that once shaped the earth.