More on mushrooms and the Bread of God 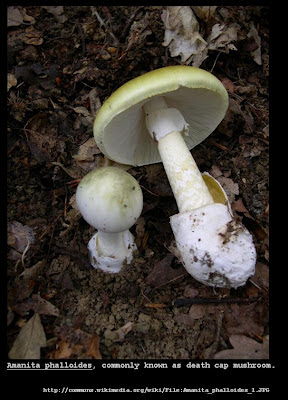 The article explains that a study by a German research team found that the toxin from one of the most dangerous mushrooms known to man -- the Amanita phalloides mushroom, commonly known as the "death cap" in English -- may be extremely effective in halting the growth of pancreatic cancer tumors (so far, only in mice).

The death cap is responsible for most human poisonings worldwide, and probably throughout history as well. Its poison, known as α-amanitin, turns off the protein synthesis in cell tissue. Typically, this toxin causes severe damage to the liver as that organ tries to filter it out of the bloodstream, often to the point that the irreversible damage is done before the victim even notices any serious symptoms.

In the recent study, human pancreatic cancer cells were transplanted into mice. Then, the powerful toxin of the Amanita phalloides was coupled with an antibody in the hopes that the antibody would seek out the specific proteins in the tumors and shut them down, without roaming through the rest of the mouse's tissues and shutting them down as well (especially the liver). Antibodies are extremely important in biotech research, because they typically have a strong affinity for a specific protein category, and can thus be used to target specific cells.

According to the article, a single injection of the powerful α-amanitin toxin (coupled with the antibody) into the subject mice halted tumor growth. After a second dose, 90% of tumors targeted by the poison-antibody combo were "erased," without any measurable damage to other (non-targeted) tissues.

This is an incredible development, although it must now be seen if the results can be achieved in humans. The article does state that, prior to testing it in mice, similarly positive results were achieved in cell cultures of cancer cells in Petri dishes.

This amazing research also calls to mind the research of Paul Stamets, discussed in this previous blog post. In his talks, as well as in his writings available online at his website, Mr. Stamets emphasizes the important health properties that fungi, including mushrooms, can provide, including medicinal properties (many of which we no doubt have yet to discover).

Fungi and animals are more closely related to one another than either is to plants, diverging from plants more than 460 million years ago. Diseases of plants typically do not afflict humans whereas diseases of fungi do. Since humans (animals) and fungi share common microbial antagonists, such as Escherichia coli, Staphylococcus aureus, and Pseudomonas aeruginosa, humans can benefit from the natural defensive strategies of fungi that produce antibiotics to fight infection from microorganisms. Hence, it is not surprising our most significant anti-bacterial antibiotics have been derived from fungi. 2.

Now, in addition to fighting microorganisms, it appears that fungi may become an essential weapon in stopping the out-of-control growth that characterizes cancer. Note that in the second of the two videos embedded in that previous blog post discussing the work of Mr. Stamets, some similar evidence of the possible effectiveness of fungi against a different form of cancer is offered. Whether you believe this is because fungi are more closely related to humans because of Darwinian evolution or not, this is amazing and hopeful.

That previous post about mushrooms also linked to the work of some authors who have argued that psychadelic mushroom species may have played a crucial role in ancient ritual and mystical experience -- even arguing that the miraculous manna described in the Hebrew Scriptures may have been some sort of mushroom that appeared at dawn among the dew.

Some of those authors note the fascinating fact that psychoactive mushrooms appear to have been referred to as "The Bread of God" by widespread cultures in both the Old and New Worlds.

In the New Testament Gospel of John, chapter 6, Christ specifically identifies himself with the manna of the Exodus, saying:

And again, later in the same chapter:

Special thanks to former paratrooper and world-famous organic farmer Dan V. for alerting me to the report of the Amanita-antibody research.
Posted by David Warner Mathisen at 10:19 PM