The shamanic tradition in ancient Egypt 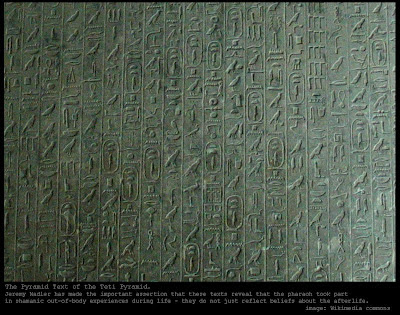 Here's a link to an interview on Red Ice Radio with Lucy Wyatt, author of the book Approaching Chaos (2010) as well as the website of the same name.

The interview is in two parts, the first of which has been titled "The Bronze Age City Builders" and the second of which is titled "The Hermetic and Shamanic Tradition."

The topics covered are both fascinating and important, and resonate with many of the subjects that I have noticed and discussed on this blog in the past, although I only recently became aware of Lucy Wyatt's work.

One of the most interesting to me is her assertion of the possibility that many of the ancient texts of ancient Egypt, which were almost universally assumed to describe the journey of the soul after death, actually describe the out-of-body journey (or astral travel) that the pharaoh would take on behalf of his people during life, a practice that survives in the shamanic traditions found in many parts of the world even to this day.

Following and building upon the work of Jeremy Naydler, her work points out the many references in the Pyramid Texts to ascending ladders, flying upwards in the form of a falcon through successive celestial worlds, and other hallmarks of shamanic tradition the world over. This is a connection which I also believe is extremely clear and extremely important, and which I first learned about through the work of Giorgio de Santillana and Hertha von Dechend in Hamlet's Mill (1969), discussed in this previous post.

Other previous posts on the subject of the important aspects of lost (or "largely forgotten") civilization that have been preserved in shamanic tradition around the world include:
and
Lucy Wyatt's interview discusses the possibility that the pharaoh prepared for this dangerous and powerful journey his entire life, which he would undertake during the private portion of the Heb Sed Festival, usually inside of a specially-built pyramid, perhaps with special electrical properties enhanced by gold accoutrements (gold being a good conductor of electricity). She notes that among Tutankhamun's burial possessions was a gilded bed designed for his Heb Sed festival. She also notes that the process may have involved some sort of psychoactive substance, possibly derived from gold, and proposes an Egyptian connection to alchemy that is slightly different from that proposed by R. A. Schwaller de Lubicz (1887 - 1961) which is discussed in this previous post.

She also suggests that it is possible that the qeni garment which the pharaoh donned during this ritual may have been designed to protect his heart from stopping if electricity was indeed involved in this out-of-body travel of his life essence, and that the "opening the mouth" ceremony described in detail in many ancient Egyptian may have been designed to prevent the pharaoh from swallowing his tongue during this experience.

Another interesting point she makes in her interview is the similarity between the intensive preparation the pharaoh would undertake prior to this shamanic journey and the intense training found in the Buddhist monastic tradition -- and in fact the remarkable similarities between ancient Eygptian and Buddhist thought are also explored in this previous post.

According to her hypothesis, this shamanic connection is no mere sidelight of history: Lucy finds evidence to believe that the original archetype for cities was accessed shamanically, rather than as a natural progression from simple farming villages. She notes that archaeological evidence suggests that shrines and ritual are the beginnings of the ancient Mesopotamian cities (Ur, Uruk, Eridu etc), not market places. Similar evidence can be found all over the world.

For further reading on this very important theory, one which has wide-ranging implications, be sure to check out Lucy Wyatt's book, as well as the excellent and extensive article she published on the Graham Hancock website here.

Also, you can learn more about her work at the upcoming Eternal Knowledge Festival in Suffolk, England, taking place on April 27 - 29.
I believe it is abundantly clear that Lucy Wyatt's work provides a very important perspective on ancient civilization in general and ancient Egypt in particular, one that is very different from the conventionally-understood view, and one that reveals that ancient civilizations may have been far more scientifically advanced than most scholars currently believe, sciences which we moderns (for all our vaunted technology) can barely comprehend.
Posted by David Warner Mathisen at 6:19 AM