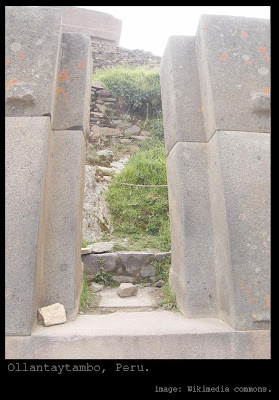 In the previous post, we looked at some of the amazing (and not yet widely-studied) ancient megaliths of India, and noted some remarkable parallels with constructs around the globe -- including in places quite unexpected based on the assumptions of conventional history, New Zealand in particular.

These correspondences are remarkable enough just between India and New Zealand, two parts of the globe generally considered to have developed without ancient cultural exchange between the two of them, according to conventional "isolationist" theory. However, what is equally remarkable are the similarities this list of elements suggests to a site in yet another supposedly isolated part of the globe -- this time in Peru, at Ollantaytambo, near Machu Picchu.

In a series of articles published on Graham Hancock's website, author and researcher (and skilled boatwright) Brien Foerster argues that the megalithic structures conventionally supposed to have been built no earlier than the 12th century AD may be far more ancient than that (although the Inca may well have extended the most ancient sites with later construction and terracing of their own). For Mr. Foerster's discussion, along with plenty of impressive photographs, see:

Then, in a "Part Four" to the above series of articles, Mr. Foerster addresses the important site of Ollantaytambo, "Ollantaytambo: House of the Dawn, an Underestimated Inca Monument."

As can be seen from the articles above, Ollantaytambo contains solstitial alignments (to the June solstice, which is winter in the southern hemisphere where Peru is located), V-shaped notches, and a massive craggy face carved into the mountainside (see page three of Mr. Foerster's article on Ollantaytambo). That face, shown below as well and also seen in other photographs on the web such as here and here, is about 300 feet tall and traditionally believed to represent Tunupa or Viracocha. 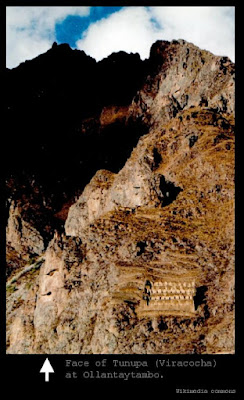 Mr. Foerster's important arguments about the ancient origins of many of the most massive megalithic structures go beyond the scope of this particular blog post, but they are well supported with extensive evidence. He will be discussing some aspects of his work at the upcoming Eternal Knowledge Festival at the end of this month in England.

The scope of this post, however, is to point out the clear connections between the stone sites in India, New Zealand, and now Peru in terms of the presence of solstitial and equinoctial alignments, the use of V-shaped notches, and the presence of massive stone sculptures utilizing the natural surroundings.

This particular confluence of features is not something I have seen specifically discussed previously, especially in terms of its recurrence in widely-separated locations such as India, New Zealand, and Peru. While isolationists may continue to argue that these features just happened to crop up in widely-dispersed cultures which had no contact with one another whatsoever, the specificity of these features argues differently and their concurrence in all three locations is very difficult to dismiss. Moreover, they are just one more set of evidence among piles of other evidence -- these recurrences do not occur in a vacuum.

Taken together, anyone who examines all this evidence would have to be extremely biased to dismiss out of hand the possibility that the true timeline of ancient history is very different from what we have been taught.
Posted by David Warner Mathisen at 2:28 PM