Stonehenge acoustics, and beyond 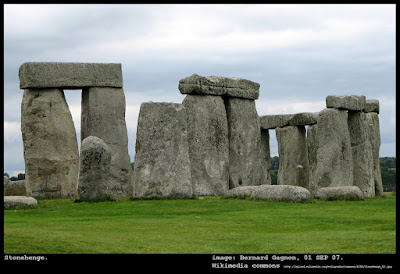 Yesterday, the BBC News reported on the work of researchers into the acoustic properties apparently designed into the layout of Stonehenge.

The article, entitled "Neolithic acoustics of Stonehenge revealed by academics," describes a theory put forward by scientist Dr. Steven Waller in February of this year (it actually fits into the extensive and important acoustical work he has been doing for years at sites around the world, and ties into material on Stonehenge that he published at the end of 2011), which the BBC article describes as "suggesting the design of Stonehenge could have been inspired by music."

In fact, however, the theory of Dr. Waller is much more amazing than that (the author of the BBC article seems to have missed it, as that is as much description of Dr. Waller's work as it gives, with no later elaboration). Based on my understanding of Dr. Waller's written paper describing his November 2011 presentation to the Acoustical Society of America, as well as the remarkable slides he has posted from his presentation on the subject from February of this year, Dr. Waller's theory might be better described as arguing that Stonehenge is actually a physical representation of acoustical wave-patterns! Specifically, it mirrors a two-point sound-wave interference pattern.

This is an amazing assertion, and Dr. Waller's research, as well as the research of two academics also mentioned in the article, appears to support such a hypothesis. The other two researchers who have now spent several years studying Stonehenge and acoustics are professors Rubert Till of Huddersfield University and Bruno Fazenda of the University of Salford (both in England). Here is a link to an article from 2009 describing some of their findings, and here are links three segments (part one, part two, and part three) from a television show discussing their work (along with over-dramatic narration and actors dressed in furs and skins reinforcing the idea -- stated in the narration -- that Stonehenge was built by primitive stone-age people just learning the first rudimentary skills of farming and beginning to gather in villages).

The work of all three researchers suggests that the site's acoustics may well relate to the use of drumming and even to altered states of consciousness (such as rhythmically induced trances), and to changes in brain-wave activity. Dr. Waller's other work in particular demonstrates the unmistakable connection between shamanic activity and acoustically unusual sites (natural echoing chambers, canyons, and caves, many of which are decorated with significant rock art). Dr. Waller's website Rock Art Acoustics discusses the art and acoustics at many such sites in the American Southwest and West, as well as at the Caves of Lascoux and other sites in Europe, Africa, Asia, South America, Australia and the Pacific.

The fact that so many of these sites seem to incorporate both celestial imagery or alignments (Stonehenge contains strong alignments, and the Caves of Lascaux contain celestial imagery, for example) and that Dr. Waller and the other researchers believe their acoustics may be connected with altered brain-wave activity, states of consciousness, or shamanic activity, is extremely significant.

In her book Approaching Chaos, Lucy Wyatt (whose work is discussed in this previous post) presents evidence that sophisticated incorporation of acoustic principles in ancient structures enabled the use of sonic and ultrasonic vibration that may have played a role in the very purposeful rituals that took place at those sacred sites. The heart of these rituals was a shamanic journey undertaken by a leader in search of beneficial knowledge for rest of the civilization. She points to evidence offered by many researchers suggesting that the Great Pyramid may have incorporated such sophisticated acoustic principles, and notes that other ancient structures around the world, including those on Malta, may have as well (158, 161-165). See this previous post for a discussion of some strong evidence that the ancient temples on Malta incorporate deliberate acoustical manipulation in their design.

Lucy also points out the power of acoustic vibrations to create physical patterns (such as in a thin layer of sand upon a metal disc), something that John Anthony West also discusses in his examination of the evidence of extremely sophisticated knowledge in ancient Egypt and the parallels between these patterns and ancient Egyptian and Pythagorean designs (see for instance the discussion in this previous post and this previous post, as well as of course his indispensable book Serpent in the Sky). Dr. Waller in the slide show linked above makes the insightful observation that, if ancient monuments such as Stonehenge are physical incorporations of acoustical wave-patterns, this could explain the numerous traditions found around the world insisting that ancient megalithic sites were erected by mystical figures using sound (often a flute)!

This appears to be an incredibly important line of investigation. The power and importance of music and chanting has been explored in many previous posts on this blog (see here, here, and here to begin), and the possible connections between acoustics and shamanic activity at these sites suggested by the work of Steven Waller, Rupert Till, Bruno Fazenda, and Lucy Wyatt sheds tremendous new light on the power of sound, and they are to be congratulated for it (and encouraged to continue!).

The high level of sophistication required for the depiction in massive stone of wave-interference patterns, as well as the achievement of finely-tuned acoustical effects in these megalithic sites, and even the simultaneous incorporation of precise solar and astronomical alignments in the very same structures, also provides compelling evidence that the knowledge that originally informed these monuments was probably not the product of neolithic early farmers as described in the conventional academic narrative and depicted in most popular drawings and shows.
Posted by David Warner Mathisen at 6:41 AM