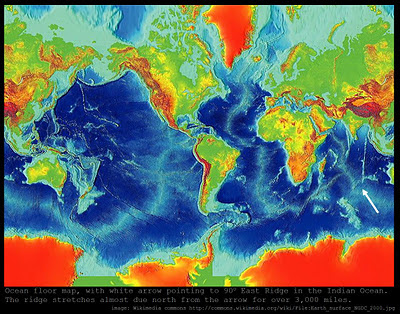 The Mathisen Corollary book explores the ramifications of the groundbreaking hydroplate theory of Dr. Walt Brown to the abundant evidence from human archaeology and mythology that mankind's ancient past is very different than we have been taught in school.

Dr. Brown's theory explains earth's geology through a catastrophic flood rather than through the gradual processes that were proposed in the late 1700s and began to gain ground throughout the early 1800s, and which became hardened into dogma following the rapid acceptance of Darwin's theories in the second half of the 1800s.

As we have pointed out in many previous posts, the geological and astronomical evidence supporting the hydroplate theory is overwhelming in its volume and in its diversity -- for links to previous discussions see this post or this post.

One of the aspects of Dr. Brown's theory that is extremely important for any examination of the evidence left by mankind's most ancient civilizations is the fact that his theory argues that the earth experienced a slow but massive roll in the aftermath of the violent events surrounding the catastrophic flood of antiquity.

He proposes that the continents of today slid to their current positions after the initial rupture of the earth's crust that caused the flood and that is still evidenced by the mid-Atlantic ridge which can be seen as a light-colored scar that snakes down the center of the Atlantic in the image above, echoing the contours of Europe and Africa to the east and North and South America to the west. When these continental plates ground violently to a halt, great mountain ridges were formed (just as ridges would be formed in the hood of a truck if you drove it into a brick wall).

The largest and thickest of these ridges contains the Himalayas, and the weight of this massive new clump on the side of the earth would have actually unbalanced the earth. The principles of physics would dictate that the Himalayas would have wanted to migrate towards the equator, due to the principle of centrifugal force (just as a rock spun on a string over your head will want to pull straight outwards, so too the Himalayas wanted to spin around the equator rather than around a point on the northern hemisphere well above the equator).

The force pulling the Himalayas towards the equator initiated the roll of the earth. Evidence that such a roll took place is manifest in several geological features around the world, the most dramatic of which include fossil evidence in Antarctica which reveals that the southern continent was not always at the latitudes of the south pole. We discussed this evidence and the reasons that the hydroplate theory explains it much more satisfactorily than the current plate tectonic explanations in this previous post. Similarly, the "big roll" initiated by the Himalayas pulled lands that were further south to latitudes that were much further north, including the islands now known as the Canadian Arctic Archipelago, as we discuss in this previous post.

However, there was a countervailing force which prevented the Himalayas from rolling all the way to the equator, and which moderated the roll so that it did not go as far as it otherwise would have, and that countervailing force was the equatorial bulge, as Dr. Brown explains on this page of his online version of his book (particularly in the discussion accompanying Figure 78, about 3/4ths of the way down the page).

Dr. Brown explains that each incremental shift of the bulge reduced the force vector countervailing the Himalayas, allowing them to shift towards the equator again, which then shifted the equatorial bulge out of stasis again, causing it to shift back towards the equator as well, and this process went on until stasis was reached. Geological evidence indicates that the total roll was 35°–45° of latitude.

Dr. Brown points to an important piece of additional geological evidence which supports this explanation of events, which is a long straight ridge at the bottom of the Indian Ocean known as 90° East Ridge, because of its location on the 90° East line of longitude. This ridge was formed because, as the equatorial bulge shifted incrementally back towards the equator, it actually ripped the crust, causing it to split apart as it "inched" its way along, like a pair of jeans that are too tight! Dr. Brown explains, "Magma quickly flowed up into this rip, which eventually grew 3,000 miles long and is today called Ninety East Ridge."

Notably, Ninety East Ridge runs north-and-south and points towards the Himalayas -- powerful confirmation for this explanation of its origin. It thus would have been a rip that started at the southernmost point and moved northwards, as the equatorial bulge below the Himalayas was displaced to the south by the roll and then worked its way back northwards.

Conventional explanations for this long straight ridge (which begins at latitude 40° South and goes all the way to latitude 14° north) include a stationary "hot spot" of magma which spurted out a line of molten rock as a plate moved over it, leaving the long straight ridge we see today. Another explanation proposes that it is a remnant of a line of volcanoes marking a breakup of tectonic plates at some point in the distant past, perhaps in the Mesozoic. However, both of these theories are very dubious in light of the fact that there are numerous parallel ridges on either side of 90° East Ridge, which are explained far better by the "ripping crust" theory proposed by Dr. Brown due to the distortion created by the shifting equatorial bulge than by any explanations the tectonic adherents have put forward.

90° East Ridge can be seen in the diagram above, marked by a white arrow at its southern point. For a more detailed depiction, you can visit this beautiful 1967 National Geographic map of the Indian Ocean Floor, which allows you to hover your cursor over the map itself for a zoomed-in close-up of the artist's depiction of the geophysical bathymetry.

Dr. Brown writes that "Earth’s slow roll after the flood would have changed the paths of the Sun and stars across the sky. Attempts to measure those irregularities may have led to the construction of ancient observatories such as Stonehenge."

I agree completely with that observation, and believe that the big roll of the earth is one of the most important aspects of the hydroplate theory for its implications on the evidence left to us by the extremely advanced ancient civilization (or civilizations) that influenced other ancient cultures around the world. The evidence for such an event is extensive. The subtle clue contained in 90° East Ridge at the bottom of the Indian Ocean, pointed directly at the Himalayas, should not be overlooked.
Posted by David Warner Mathisen at 10:29 PM