Clear evidence of ancient trans-oceanic contact on every US map 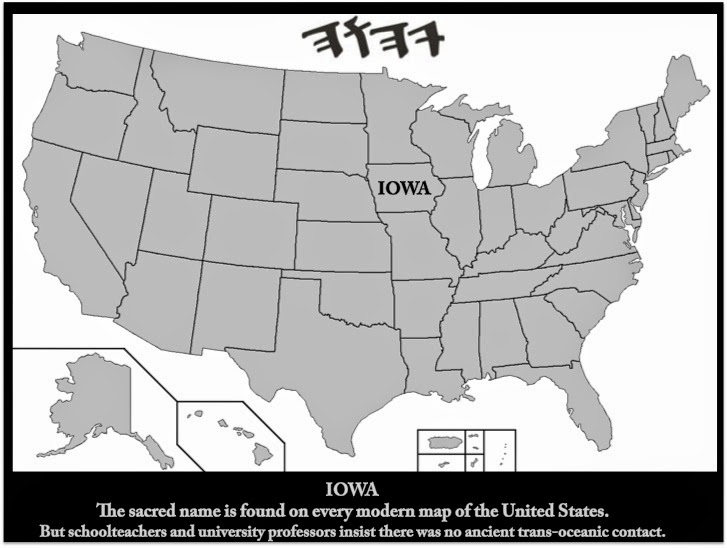 The previous post ("The Smithsonian cover-up") discussed the "Powell doctrine" of John Wesley Powell (1834 - 1902), first director of the US Bureau of Ethnology, which declared illegitimate all attempts to connect any artifacts found in the New World  with any of the ancient peoples in "other portions of the world."

This flatly "isolationist" policy placed all "diffusionist" lines of analysis strictly "outside the pale" of accepted academic discourse, and it remains firmly in effect to this day (diffusionist theories entertain the possibility of ancient cultural contact across the oceans and the "diffusion" of cultures and ideas between the continents prior to the time of Columbus).

If you don't believe the Powell doctrine is still in effect, just try walking into any history department of any college or university in the United States and inquiring about a professorship, while expressing your enthusiastic support for the study of ancient trans-oceanic contact with the New World and the clear possibility of cultural diffusion between (for instance) the ancient cultures of the Mediterranean and the peoples living in the Americas stretching back to the centuries "B.C.", and see how far that gets you.

That post also examined circumstantial evidence, in the form of Powell's dedicatory letter found in his first report (dated 1880, and covering his bureau's activities from its inception by act of Congress in 1879), that this strictly isolationist policy did not simply originate from Powell's own predilections and opinions, but that it was imparted to him by the Secretary of the Smithsonian Institute, and that the Secretary himself received his marching orders from some other unnamed persons, presumably persons of some power and influence.

Powell describes his bureau's research to the Secretary in that letter in these words: "the general direction of which was confided to you" -- as in, somebody communicated the general direction of the research that the Bureau of Ethnology would pursue to the Secretary of the Smithsonian, and the Secretary of the Smithsonian passed on those instructions to John Wesley Powell.  The words "was confided" lend a somewhat mysterious air to the reference, and the passive voice of the construction allow Powell to avoid specifying the subject of the phrase (that is, allowing him to avoid naming the person or parties doing the confiding).

We can also infer that this strictly isolationist policy (and the anathema it imposed upon any diffusionist analysis) was not simply due to Powell's own preferences by the fact that this dogma has continued to guide the policy of the Smithsonian Institute, and to be enforced by the conventional academic world at large, long after the departure from this world of John Wesley Powell, his superior the Secretary of the Smithsonian Institute, and all the rest of his generation.

In the intervening 135 years (that is to say, an entire century plus another three-and-a-half decades) since 1879, any artifacts discovered in the New World containing inscriptions using a writing system that clearly belongs to the cultures of the Old World have either been studiously ignored (in hopes that they will go away if few enough people ever hear about them) or immediately declared to be transparent hoaxes (this method is generally employed whenever artifacts with ancient writing on them gain enough popular attention that the "ignore and hope they go away" method simply won't work).

In some special cases, such as the case of the writing system used by the Mi'kmaq nation of First Nations native peoples, neither of the above two methods would suffice.  Their writing system, which is attested to by documents stretching back into the 1700s, so clearly resembles the ancient hieroglyphs of the Egyptians that it can neither be denied nor ignored, and it certainly cannot be declared a fraud or a hoax, and so the conventional explanation is that Christian missionaries must have created the writing system for the tribes, and they chose to create a writing system based upon Egyptian hieroglyphs.

Why Christian missionaries in the 1700s chose to use ancient Egyptian hieroglyphs when creating a system of writing for the Mi'kmaq is hard to fathom (especially since the Rosetta Stone had yet to be re-discovered or deciphered), and how this ridiculous explanation is somehow less insulting to the Native Americans than the possibility that ancient cultures were capable of occasional (or even sustained) contact across the oceans in the time of ancient Egypt remains difficult to comprehend, but apparently the supporters of the Powell doctrine think that such a convoluted hypothesis is preferable to the alternative.

Unfortunately for those who have managed to keep this equivalent of the "flat earth theory" the only permissible worldview taught in schools (from pre-school through post-graduate school), there is simply so much evidence staring people right in the face that eventually the illusion is bound to break down.

One of the glaring pieces of evidence can be found on any map of the United States, and it is shown on the map above -- the name of the state of Iowa.  The name of this state comes from the Native American people related to the Sioux, the Iowa or Ioway people.  Regardless of the explanations for the origin of this name found on Wikipedia, it is undeniable that the name "Iowa" has clear linguistic parallels to the sacred name used in ancient Mediterranean cultures, including the sacred name of the Hebrews which is rendered by the "tetragrammaton" or four letters and which has been sometimes expanded with vowels to be rendered as "Jehovah" and "Yahweh."

This name was and is considered so sacred by some cultures that it cannot be pronounced or written, and it is often written in ways which distinguish it as sacred.  For example, in many ancient Hebrew documents which use the "square" Hebrew lettering, it would be written using the older, "rounder" lettering known as Paleo-Hebrew (these four letters in Paleo-Hebrew are depicted on the map above, and are written from right to left).

And, while some might argue that the Iowa tribe's name derived from some other source and has nothing to do with the ancient sacred name of the Hebrews -- that this is just a linguistic coincidence, in other words -- it is a fact that other Native American peoples used the same name or something very similar to it in ways that make coincidence less and less likely.

For instance, in an essay discussing the "Michigan cuneiform tablets" (which are discussed tangentially in previous posts here and here and which are examined more thoroughly in a book by Henriette Mertz entitled The Mystic Symbol: Mark of the Michigan Mound-Builders), analyst and author David Allen Deal notes that: "James Adair reported that the Cherokees, among whom he lived, chanted the sacred letters: 'YO (you), He, Wa (waw),' =YHW as they danced around their sacred fire, and observed a fall harvest feast as did the Israelites" (in "The Mystic Symbol Demystified," by David Allen Deal, which is included in the above-linked book by Henriette Mertz; this quotation is found on page 170).

Also, in the record made by Frank Waters based on the oral accounts of Hopi elders which he tape recorded in the 1950s (and which those elders examined for accuracy prior to his publication of the sacred traditions in book form as The Book of the Hopi in 1963), the name of the Creator is Taiowa (see for instance pages 5 - 20).  The fact that the Cherokee and the Hopi also use the sacred name or variants of the sacred name of the Hebrew scriptures is a strong argument for some ancient contact across the oceans.  This previous post discusses evidence that inscriptions in New Mexico attest to ancient contact with Hebrew-speaking peoples in pre-Columbian times -- that post is also dependent upon the excellent analysis of David Allen Deal.

David Allen Deal also notes that the Native American name given to the "Mound Builder" cultures (whom so many among the general public during the nineteenth century wanted to believe had connections to ancient Israel, an idea which John Wesley Powell and the Smithsonian Institute wanted to suppress) was "Tallegewi" (also rendered "Allegewi" and ultimately "Allegheny," a name which is also found on modern American maps).  In an essay entitled "Michigan Solar Eclipse Tablet and Mound Builder City," which is also contained in the Mystic Symbol book linked above, David Allen Deal notes that the name "Tallegewi" for the Mound Builders was recorded among the Leni Lenape or Delaware nation by John Heckewelder (1743 - 1823), and "that name is certainly Hebrew."

In Hebrew Tel means "hill or mound" (tel-y is plural) and gew-y means "my nation" or "nations" (plural again).  So Tely-gewy in Hebrew means "mound nations."  And that is what they were.  194

We can see examples of the word "Tel" in modern "Tel Aviv" and the word "gew" (for "nations") in the familiar term goyim.

These linguistic connections make it very unlikely that the word "IOWA" is simply a coincidental connection to the ancient Hebrew sacred name.

Note also that this sacred name is not found solely among the Hebrews.  The name of the supreme Olympian diety, Jove, is liguistically identical to the word "IOWA" as well.   This name is related to Zeus and to Jupiter (Ju-pater, or "Jove the Father" in Latin).  Alvin Boyd Kuhn expounds at some length on this theme in Lost Light, saying:

For many thousands of years before Christ, the prototype of all coming saviors was the Egyptian Iusa.  The name is from Iu (Ia, Ie, Io or Ja, Je, Jo, Ju), the original name of biune divinity, combined with the Egyptian suffix sa (or se, si, su, or saf, sef, sif, suf), meaning, with the grammatical masculine "f," the male heir, son, successor, or prince.  Iusa then means the son of the divine father Iu (Ju-piter, "father god"), or the son of Ihuh (Jehovah).  He was Iu, coming as the su, or son.  His mother in the Atum cult was Iusaas.  He was God the son, the prince, the heir.  He was the original of all Jesus figures, of whom there are some twenty or more by the name of Jesus (Joshua, Jesse, Joses, Hosea, Isaiah, Isaac, Esau, Josiah, Joash, Jehoaz, Jehoahaz, Job, Jonah, Joel and others) both in the Old Testament and outside of it.  544.

The evidence for cultural "diffusion" (and against the isolationist dictums of John Wesley Powell, the Smithsonian Institute, and conventional academia) is impossible to deny, and it is staring us right in the face (every time we look at a map of the US).  It cannot be "explained away" using their usual tactics of "ignoring it and hoping it goes away," or "transparent nineteenth-century fraud or hoax," or even the special excuse of "the missionaries brought it."

There must be a very big reason why the powers-that-be find it so important to deny the clear evidence of ancient trans-oceanic contact. 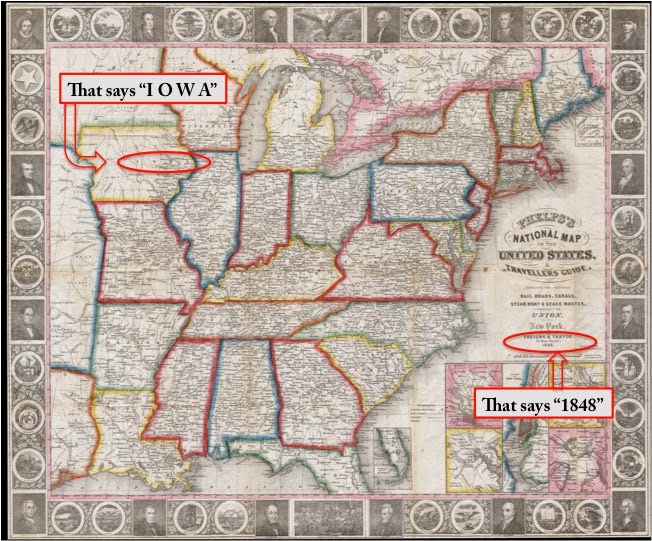