The horizon and the scales of judgement 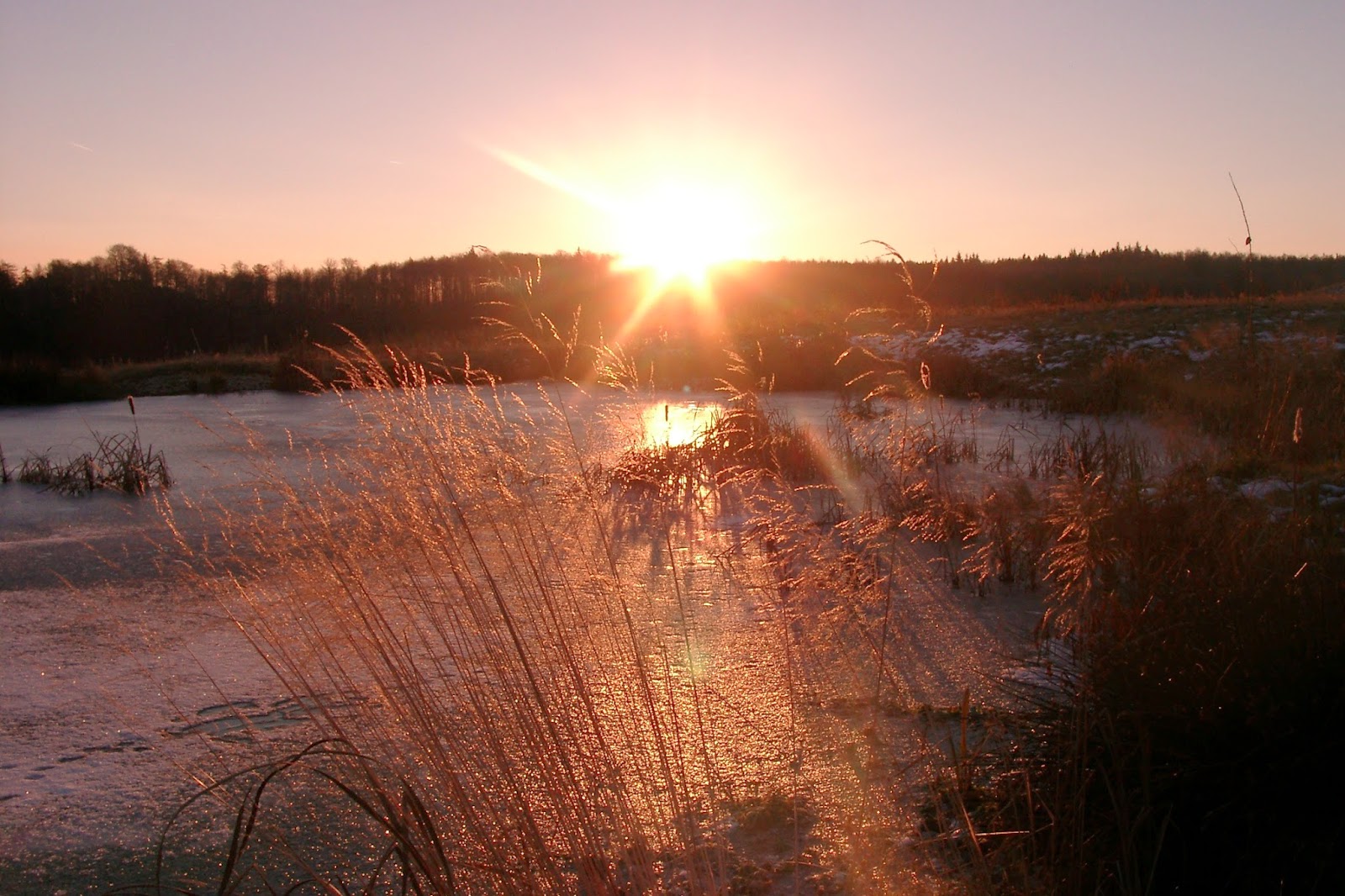 In the "Hymn of Praise to Ra When He Riseth Upon the Horizon, and When He Setteth in the Land of Life" (which can be found in this online transcription of E. A. Wallis Budge's translation of various Book of the Dead texts contained in the British Museum, a bit more than half-way down the very long web page, in a section entitled "APPENDIX (from the Papyrus of Nu, Sheet 21)" we read:

Those who have lain down in death rise up to see thee, they breathe the air, and they look upon thy face when the disk riseth on the horizon.

Immediately before that, in "Another Chapter of the Coming Forth of a Man by Day Against His Enemies in Khert-Neter" which can be found on the same web page in the "APPENDIX (from the Papyrus of Nu, Sheet 13)" we read:

I have divided the heavens.  I have cleft the horizon.  I have traversed the earth in his footsteps.  I have conquered the mighty Spirit-souls because I am equipped for millions of years with words of power.

These are obviously very important and moving passages, but what do they mean?  Conventional academia teaches that these passages, along with the rest of the Book of the Dead, express the Egyptian hope for the soul in the afterlife, that the souls of those who "have lain down in death" will somehow rise up to see the sun again and breathe the air again, and that this hope is somehow connected with the knowledge of "words of power."

Alvin Boyd Kuhn, however, (whose work has been discussed in previous posts such as this one, this one, and this one) gives a very different interpretation, and one which he backs up with hundreds of pages of evidence from these and other ancient sacred texts.  He argues that the conventional reading just described falls into the trap of literalism -- of reading as literal a piece of literature which was never meant to be understood literally, but which instead attempts to convey profound and nearly-ungraspable truths in the form of symbols and metaphors through which those truths can in fact be apprehended.  The Book of the Dead, he argues, is not talking about those who are literally dead, but rather those on earth right now, who are metaphorically passing through the underworld, who can be described as "the dead" because they are in fact immortal spirits who have taken on the physical mortal flesh of material existence.

Using this understanding, the metaphor of the horizon becomes, in Alvin Boyd Kuhn's reading, a wonderful symbol of human existence, because it depicts the union of the spiritual realm (the sky) and the material realm (the earth beneath).  It symbolizes the human condition, because in our incarnate state we are a union of soul and matter.  In Lost Light, Kuhn writes:


And the horizon is half way between heaven and earth, typing, as always, spirit and matter, the two ends of being.  The momentous information, then, which is vouchsafed to man in this recondite fashion is that he, as a creature in a stupendous cyclical evolution, stands at the point exactly midway between the beginning and end of the complete area to be traversed.  [. . .]

[. . .] this fateful line would at the same time mark the boundary between the two natures in man's constitution, the earthly and the heavenly.  449-450.

Kuhn goes on to explain that once this metaphor is understood, all the imagery in the ancient Egyptian texts referring to a great battle which is fought "on the horizon" can be understood to refer to the great metaphorical battle which each individual must wage during his or her time in this material realm in which the spirit is enmeshed in earthly matter.  This world in which we find ourselves, composed of "the earthly and the heavenly," is the place where we must learn to reconcile the two natures.  Kuhn declares:

Closely related to the symbology of the horizon is the symbology of the Judgement Hall in the Egyptian scriptures.  Here again, the conventional interpretation of the famous Judgement Hall scenes in the Book of the Dead is that the text refers to a judgment which takes place over the soul in the afterlife, but Kuhn demonstrates that, like the metaphor of the horizon, the Hall of Judgement symbolizes the soul's journey in this life, during which our daily actions and experiences, our "living activity and expression," is measured and recorded as if in a book (451).  Below is an image from the famous Hall of Judgement vignette in the version of the Book of the Dead found in the Papyrus of Ani. 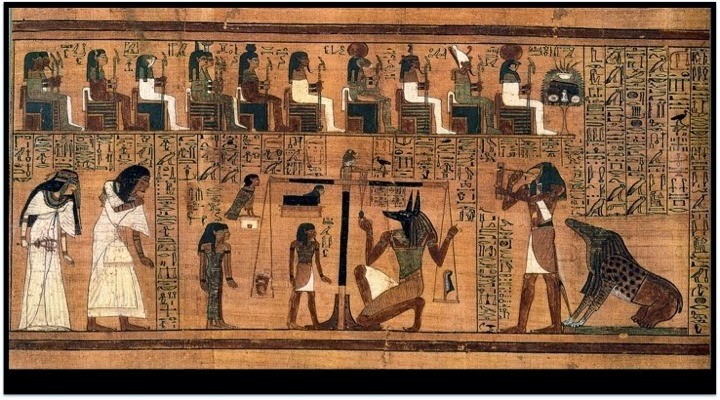 In fact, as Alvin Boyd Kuhn demonstrates in Lost Light, our judgement in the horizon of this life and in the scales of the Hall of Judgement are closely related.  For one thing, the Judgement Hall in the Book of the Dead is also referred to as the "Hall of Two Truths," and we have already seen that the symbology of the horizon depicts the "two truths" of mankind's human condition -- that we occupy the boundary between the realms of the earthly and the heavenly, and that we embody and encompass both aspects in our human nature (Lost Light, 483).  Also, the scales of judgement are often described as being located upon the horizon, or upon a hill or mount, which is a terrain feature which suggests the horizon.

Intriguingly as well, the zodiac sign of the Scales of Judgement -- Libra -- is located upon the "horizon" of the zodiac wheel, for Libra begins just at the border formed by the September equinox, where the ecliptic path of the sun crosses below the celestial equator again after the summer months in which the sun's daily ecliptic path has been above that line (see diagram below).  As Alvin Boyd Kuhn writes about this symbology:


And this at once opens the way for the introduction of the whole range of symbolic values connected with the sign of Libra, the Scales of the Balance, and the Scales of Judgment.  And precisely at the horizon's western terminus stands the Libra sign!  The Judgment is a corollary aspect of the horizon typism and will be treated in a following chapter.  451. 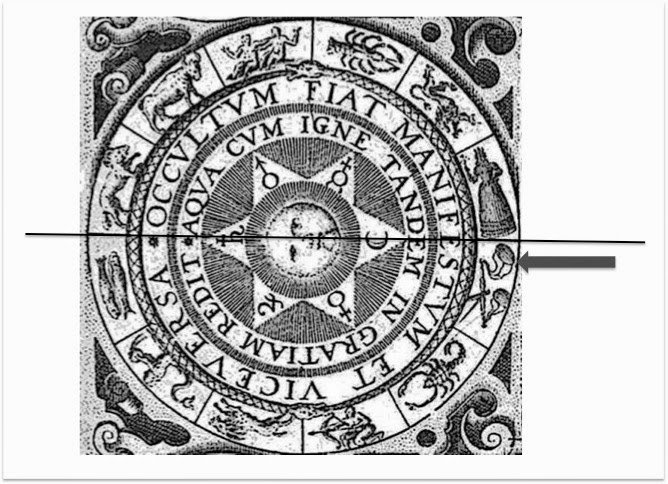 We can now see that there are plenty of cogent reasons for interpreting the passages in the Book of the Dead, including those cited at the beginning of this essay, as describing the condition of the individual soul in this life, and not in a life hereafter.  But what are the implications of the Book of the Dead's teachings which declare our earthly incarnation to be a "battle at the horizon," or a "weighing of the heart" in the scales of truth?  And what does the Book of the Dead mean to tell us when it depicts the triumphant soul declaring that it is "equipped for millions of years with words of power"?

We have already seen in a previous meditation upon the Hall of Judgement scenes in the Book of the Dead that the texts surrounding the scene put a great emphasis upon the soul "telling the truth" or "not going about with deceitful speech while upon the Earth."  And, we have seen in our examination of the famous command inscribed in stone at the Oracle at Delphi that "Know thyself" appears to have been understood by Plato and by other philosophers including Plutarch as a command to realize that we are immortal souls enfleshed in a body during successive incarnations which each have an important purpose.  If this is the case, then the Book of the Dead's emphasis upon "declaring the truth" and on "not going about with deceitful speech" while we are here between or upon the horizons -- while we are being weighed and measured in the balance-scales of the Hall of Two Truths -- may also be telling us that an important part of our activity in this life includes first learning (or, more precisely, remembering) the truth of our true human condition, appreciating all the ramifications of this truth, and then speaking and acting in a way that acknowledges this truth about who we are.

Acting deceitfully (or "going about with deceitful speech") would then include efforts to deny or obscure the truth that, as Kuhn eloquently describes it:


this life is the period of its [the soul's] trial and testing.  The soul is drawn here to exercise her undeveloped powers, as Plotinus has so well told us.  Without such a testing she would remain forever ignorant of her own latent capacity, or would never bring it to expression.  Here is where she is thrown into the scales of balance, in Libra on the horizon, and here is where she is being weighed.  485-486.

One way this truth is obscured is by those who insist that ancient scriptures such as the Book of the Dead were anciently understood literally and woodenly, describing a fantastic judgement scene in an afterlife-world: an interpretation which obscures all the teachings we discover when we see that these texts employed exquisite metaphors to convey profound truths about our human condition in this life itself.  It is this knowledge, Alvin Boyd Kuhn tells us, that the ancient Egyptians believed to be the touchstone for the soul during the daunting passage through the material life in each successive incarnation.  He writes:


The Ritual [that is to say, the Book of the Dead] speaks of the secret knowledge of the periodicities and cycles of incarnation as requisite to render safe the passage through all the trial scenes in the Judgment Hall [that is to say, the trials of this life here on earth].  The salvation of the deceased depended on his having the facts treasured up in his memory.  As the soul walked through the valley of the shadow of death, his security depended upon his knowledge that he was a divinity threading his way through the dark underground labyrinth of matter.  His memory of his intrinsically deific nature would be his safeguard; and this memory was his book of life and character, for it was his own self, come hither to purify itself of dross.  489-490.

These, then, constitute the "words of power" which equip the soul "for millions of years."  That is to say, it is the soul's memory of its eternal, divine nature that equip it for the long journey through successive incarnations over vast stretches of time, and which safeguards the soul from being swallowed up in the animal nature of the physical body, forgetting where it came from.

We should all be grateful to Alvin Boyd Kuhn for illuminating the esoteric truths contained within the Egyptian Book of the Dead, and for demonstrating the importance of approaching those texts esoterically, rather than literally.  And, we should be grateful as well to the ancient sages who composed those incredible texts, and passed on their understanding of the human condition to generations who would live thousands of years after the kingdom of Egypt had been buried beneath the sands of time.

Posted by David Warner Mathisen at 1:46 AM