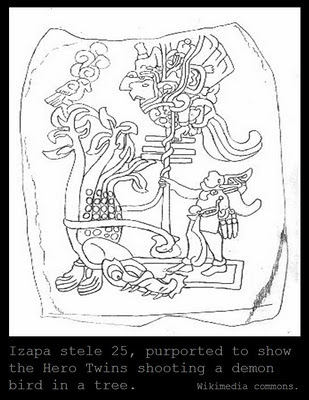 It will soon be 2012, which means that interest in the ancient Maya will be increasing soon and may hit an all-time high (there's no real way to measure such interest, but if there were the device would certainly be registering greatly increased levels). One aspect of that very complex and still mysterious and poorly understood civilization of great interest to me is the degree to which their surviving texts and monuments provide evidence of cultural contact or common descent with cultures that defenders of the conventional theory refuse to admit could have had any connection to the Maya.

For example, try telling a typical university professor that you believe the ancient Maya and the ancient Egyptians and ancient Sumerians or Babylonians may have had a connection, and see what the response will be. And yet, the evidence for such a connection (either through a common anscestral civilization, through direct contact, or perhaps both) is quite stark.

Take for instance the evidence in the Popol Vuh, a Maya sacred text preserved through the efforts of a Dominican friar named Francisco Ximenez, which he preserved by hand in a manuscript he wrote in 1701. It contains a Creation account, a Flood account, and the account of two Hero Twins named Hunahpu and Xbalanque.

The fact that much of the narrative of the Popol Vuh concerns two heroic twins who descend to the underworld as part of their adventures immediately brings to mind the epic of Gilgamesh (or the Gilgamesh series), which is a Sumerian text that is among the oldest texts on earth, later found in Babylonian as well, and which features the adventures of two heroic twins, Gilgamesh and Enkidu. The fact that the Gilgamesh series also features a Flood narrative (as does the Popol Vuh) is another important similarity.

Even more significant is the fact that, in the Popol Vuh, there is a deity named "Gucumatz" (as transcribed by Francisco Ximenez when he preserved the text). While Gucumatz in the Popol Vuh is not one of the twins (he is one of the creator deities), the linguistic similarity to the name "Gilgamesh" is striking and difficult to dismiss as a simple coincidence (especially given the similarities in the content of the epics). The late Henriette Mertz calls attention to this similarity in her book The Mystic Symbol (published posthumously in 1986).

Any student of the night sky, and of the work of Giorgio de Santillana and Hertha von Dechend, will be suspicious of the possibility that prominent mythological twins may have a celestial component, and it appears quite likely that the Hero Twins of the Popol Vuh represent the celestial twins of Gemini in some way.

For example, in the important stelae found at Izapa in modern-day Chiapas, Mexico, the Hero Twins are depicted in activities and orientations that strongly suggest a celestial component. In the stele shown above, Izapa Stele 25, scholars have asserted that the carvings represent the Hero Twins in the act of "shooting a perched demon bird with a blow-gun."

As readers of this blog will know, the presence of a bird on a stick next to a depiction of mythological twins is very significant: it should immediately call to mind the scene from the Panel of the Wounded Man at Lascaux (in France), which we have seen may well represent the constellation Gemini in between Taurus and Leo, where there is a prominent bird on a stick depicted nearby. As we saw in those previous discussions about Lascaux, the Twins (depicted at Lascaux as a single man leaning at the proper angle to depict Gemini and composed, like that constellation, of two parallel lines) were possibly associated with the myth of Yima (or Ymir, or Yama), who is associated with Saturn / Kronos by de Santillana and von Dechend. Here is a previous post discussing the reason that the Twins (like Saturn) are often associated in myth with a lost "Golden Age."

As we saw in that previous discussion about Lascaux as well, the cave paintings are not the only place that the constellation Gemini is associated with a bird on a pole: the round Dendera Zodiac of Egypt also features a bird on a pole next to the Twins. In that Egyptian artwork, the bird on the pole is actually a Horus falcon! All of this makes the stele above from Central America extremely interesting, and the likelihood that it actually depicts "shooting a demon bird with a blow-gun" somewhat suspect.

Lest some argue that the correlation of the Twins with the bird-on-pole imagery from the Old World in the above stele is a stretch, we can turn our attention to the stele shown below, also from Izapa and known as Stele 2. 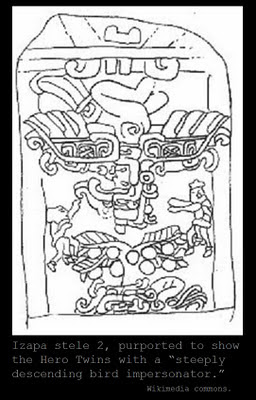 Here, scholars have identified the Hero Twins again, this time flanking a figure which is described as a "steeply descending bird impersonator." While that may be a literal enough description of the central figure in this stele, since it does clearly have human features such as legs in addition to its bird-like wings, it may be a misnomer to call it "steeply descending." After all, it appears to be in a kneeling posture.

In fact, the kneeling posture of the bird-man figure in this stele recalls quite strongly the image of Isis kneeling with outstretched bird-wings, found throughout ancient Egypt (such as in the image in the tomb of Seti I depicted in this previous post). In that previous post, we saw that there is good reason to believe that this particular depiction of Isis represents an association with the important constellation Cygnus the Swan, in the Milky Way.

If the above figure from Stele 2, which is strongly reminiscent of the kneeling depiction of Winged Isis in ancient Egyptian art, also represents the constellation Cygnus, it could explain the reason that its head is pointing downward towards the tree (which could be a World-Tree like Yggdrasil of Norse mythology, which had an Eagle in it just like the Milky Way does). Note that the Twins are located at the far end of the Milky Way from the Eagle and the Swan, and that the Swan is flying away from the end of the Milky Way where the Twins are located.

Of course, conventional scholars will never admit the possibility of some ancient contact between all of these different cultures (or with some lost or unknown civilization that influenced all of them, even if they themselves did not have direct contact with one another). However, the evidence presented above appears to be quite convincing, and at least should argue that such a possibility does not deserve to be rejected out-of-hand.
Posted by David Warner Mathisen at 12:30 AM