"Thou journeyest on the road whereon the gods journeyed" 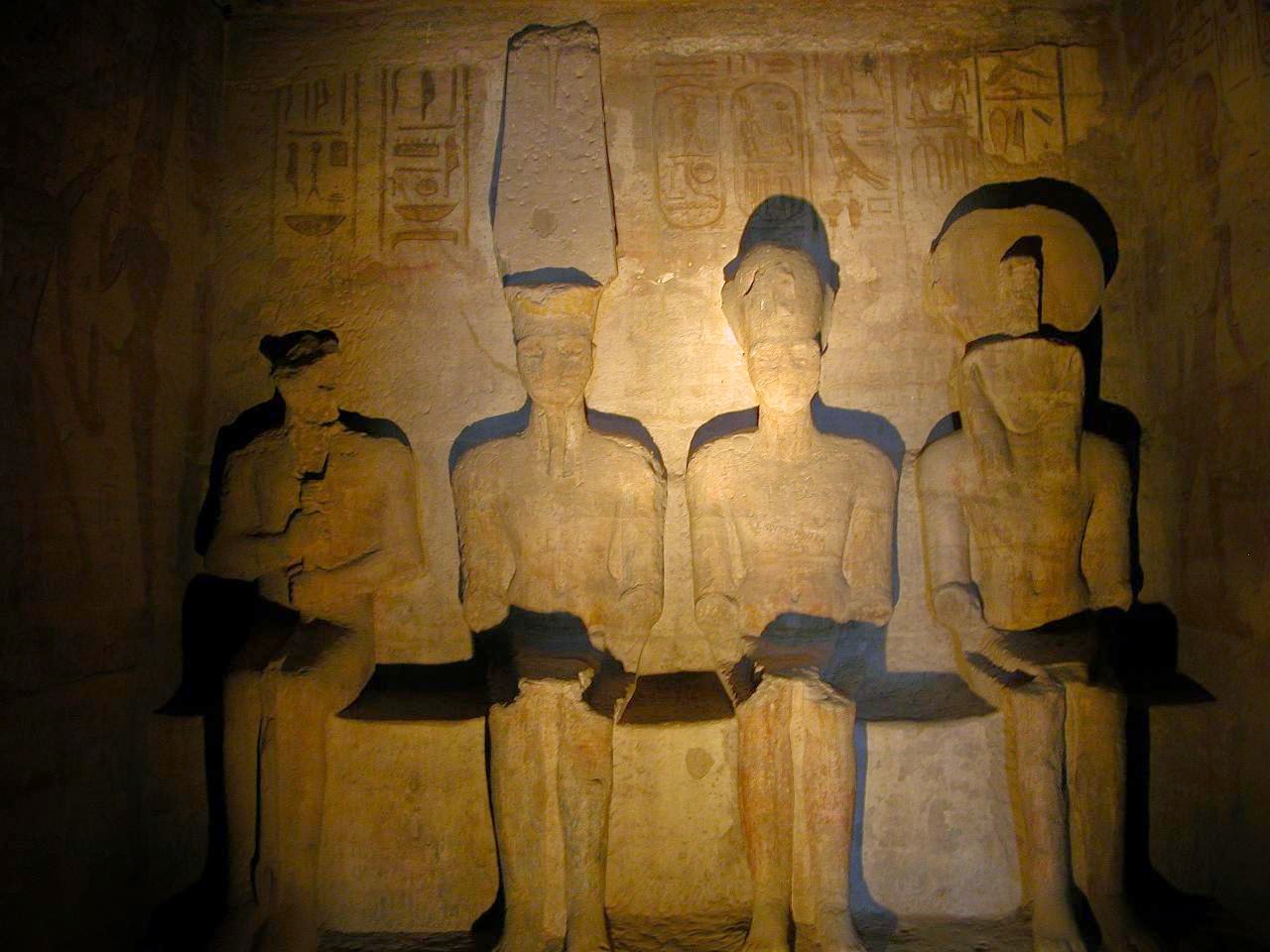 
The earth has now passed the point of the June solstice, and the sun is now beginning its long decline towards the bottom of the year (for those in the northern hemisphere: for the southern hemisphere, the sun's path will now be climbing in the sky).

This long descent of the sun each year furnishes the ancient mythology of the world with a powerful metaphor for the descent of the god out of the fiery realm of the heavens and into the miry realm of earth and water: the incarnation.

In Lost Light, Alvin Boyd Kuhn argues that all the ancient myths of the god or goddess descending to earth -- there to be cut up and scattered abroad, or to search for the cut up body of the god, or to dwell among mankind, or to be hidden in a secret place -- were intended to teach that individual men and women (and babies and children too) each contain a divine and immortal spark, temporarily buried inside material flesh.

In other words, the gods and goddesses of the myths are in humanity.

In support of his argument, Kuhn cites a remarkable passage from the Pyramid Texts of the Egyptian king Pepi I (reigned circa 2289 BC to 2255 BC). On page 121 of Lost Light, Kuhn writes:

In Egyptian scriptures we encounter the promise that "if Pepi falleth on to the earth, Keb [Seb] will lift him up." Pepi here stands for the divinity in man, the god come to earth. To him in another place it is said: "Thou plowest the earth . . . Thou journeyest on the road whereon the gods journeyed." Here is identification of the earth as the place to which the gods were sent to travel the road of evolution.

Note what Kuhn is asserting in the above lines: that the scriptures in the Pyramid Texts are identifying the "road whereon the gods journeyed" as this human world of the incarnation.

In other words, the gods and goddesses of the myths are in humanity.

Here is a more modern translation of the same passage from the Pyramid Texts of Pepi I, this time from the 2005 publication Ancient Egyptian Pyramid Texts, translated by James P. Allen and edited by Peter der Manuelian, available to read in its entirety online here (but worth owning in hard copy as well, of course). On page 107, we find the passage that Kuhn quotes in his argument: it is from Recitation 37, Address to the Spirit as Osiris in the Duat:

The earth has been hacked for you and a presented offering laid down for you before you, and you will go on yonder path on which the gods go.

The implications of this passage are profound. The ancient text is here confirming the interpretation presented by Kuhn, and elaborated in The Undying Stars, that the celestial motions of the sun, moon, stars, and planets which are allegorized in all the ancient myth-systems of the world (including those in the Old and New Testaments of the Bible) were intended to convey an esoteric teaching: that the gods descend and walk the path of the underworld, and that this path is the path we ourselves are walking ("thou journeyest on the road whereon the gods journeyed").

The gods, of course, are the sun, moon, planets, and stars -- after all, are the planets not named Mars, Mercury, Jupiter, Venus and Saturn? And yet, as they journey along their "road" through the heavens, each of these eventually plunges down into the western horizon, there to toil through the underworld until they rise again on the eastern horizon. This allegorizes the human condition in incarnation, divine sparks plunged into bodies made of clay (water and earth).

And the assertion that the gods and goddesses of the myths are to be found inside each one of us is reinforced in this passage by the text's calling attention to the "road" or "path" on which the gods go. The sun, moon, and visible planets travel through the sky along the ecliptic band: this is the road whereon they journey, and they cannot deviate from it. That ecliptic band contains the stars which make up the zodiac constellations -- and we have already seen that the ancients taught that there is a direct zodiac correspondence in the human body ("as above, so below"). In other words, the zodiac not only stretches across the infinite heavens in the macrocosm, but is also contained in the microcosm of the individual body of each man or woman -- from head to toe (Santos Bonacci has many outstanding videos in which he expounds upon this concept).

So, if the planets (that is to say, "the gods") travel along the zodiac path through the heavens, but that zodiac path is also reflected within the human body, we can see once again the clear teaching that . . . the gods and goddesses of the myths are in humanity. And, as discussed in this previous post, there are ancient wisdom traditions which teach a direct connection between each major organ in our bodies and a specific planet in the heavens.

While literalist theology as it has been taught for the past seventeen centuries would generally tend to reject the assertion that "the incarnation" refers to the spark of divinity coming down and incarnating in every single human being, there is some clear support in the scriptures of both the Old and New Testaments for the position that this is exactly what they always intended to convey.  In the Old Testament, for example, Kuhn argues in that same chapter VII of Lost Light that myths such as Abram being sent out of Ur of the Chaldees into a land to the west is yet another clear celestial allegory of the descending heavenly spark, representative of incarnation (he argues on page 113 that the word Ur itself means "fire," as in the realm of the fiery stars, and notes that the Duat of the Egyptians was located in the west, where the stars set due to the turning of our planet on its axis).  He also points to the "descent" of Abram into Egypt (allegorical for the lower half of the zodiac wheel, the underworld) for a time as telling the same incarnational story, and again that the descent of the twelve sons of Jacob later in Genesis tells the same (113).

Another well-known Old Testament verse which Kuhn does not directly point to in Lost Light, but which seems to have a clear parallel to the metaphor of Prometheus bringing down divine fire concealed in a smoking reed or handful of reeds is found in Isaiah 42 (quoted again in the New Testament book of Matthew): "A bruised reed shall he not break, and the smoking flax shall he not quench: he shall bring forth judgement unto truth" (Isaiah 42:3; Matthew 12:20 modifies the last part somewhat by saying "till he send forth judgment unto victory," which could be esoterically understood as saying that our incarnations here will continue until the cycle ends in judgement unto victory).

In the New Testament, Paul teaches in many places "the mystery of Christ in you," for example in 2 Corinthians 13:5, as well as in his own description of his first receiving the revelation of this mystery, in Galatians 1:16.

And, Kuhn argues that this understanding of the New Testament metaphors (that they teach the exact same esoteric truth as that which was conveyed by the descent of the gods to earth in the myths of Dionysus or Osiris) helps shed light on the otherwise difficult-to-explain passage in Luke 14:26, in which Jesus orders his followers to hate their father, mother, brother, sister. In Kuhn's interpretation, this discussion of "leaving one's family" is metaphorically describing the leaving of the heavenly realms to plunge into exile in matter (the incarnation). Seen in this light, Kuhn argues, it is not talking about our human parents and siblings at all, and it certainly is not teaching "hatred" of those human relations (Lost Light, 126).

On the contrary, all these ancient teachings should impart to us a new appreciation of everyone we meet, as well as ourselves. In this view, each person contains an infinite universe, because each is a "microcosm" of the infinite cosmos. Each, too, embodies within himself or herself "the gods." That includes the baby screaming in the seat behind us on an airplane (or the 4-year old kicking the back of our seat)! This should engender in us a profound sense of wonder for everyone we meet, and a new appreciation of who we are as well. It should also point us towards the natural-law principles of nonviolence and respect for the lives and bodily safety of those with whom we come in contact (and our own as well).

Posted by David Warner Mathisen at 1:08 AM