A new theory on chemtrails proposed by Mark McCandlish 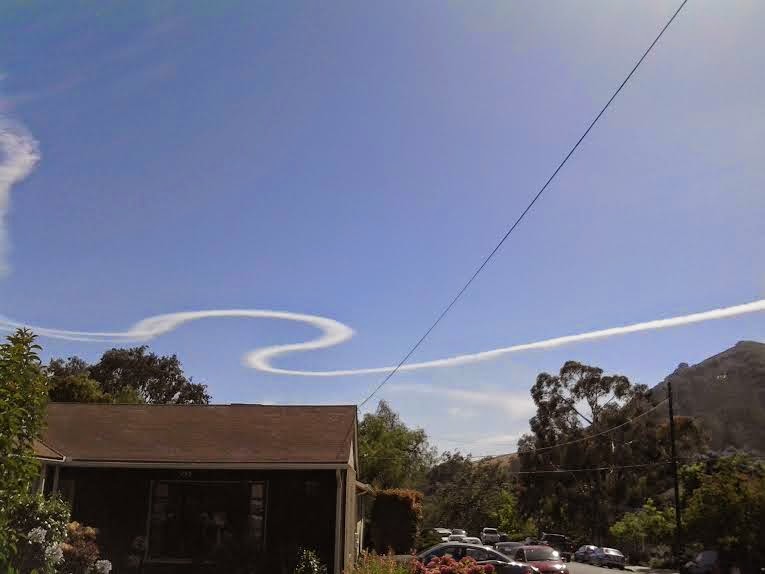 At the Secret Space Program and Breakaway Civilizations conference all day today -- terrific talks and discussion from all the speakers.

My brain pan is spinning at such a velocity after listening to so many thought-provoking conversations in one day that I can barely write a coherent post! It will definitely take time to slowly chew over and digest some of the concepts that were introduced today, but many of them resonate with the subjects examined in The Undying Stars, and there should be some posts appearing here in the near future exploring some of those connections.

However, one of the comments Mark McCandlish made towards the very end of the day (if you didn't stay until 9 pm, you probably missed this one) was something I had not considered before and wanted to "re-broadcast" right away, as something worthy of wider discussion and consideration.

Mr. McCandlish discussed a great many extremely important subjects today, most of which involved what might be called "exotic technologies" and propulsion systems, how those might work and how it is possible that they have been in existence for many years -- with capabilities that are absolutely mind-blowing. This subject is of course absolutely central to all of the topics being examined at this conference, and the work Mr. McCandlish has done in gathering the evidence, thinking about it and researching it and discussing it with others for many years, as well as using his considerable artistic and technical illustration talents to communicate the principles that may be at work, entitle him to all of our respect and deep gratitude.

But, it is obvious that Mr. McCandlish (along with some of the other speakers) also cares deeply about the question of chemtrails, and towards the end of the evening he took the opportunity to respond to a question or comment from the audience about this subject, and to provide a possible explanation for their purpose which I had not heard nor considered previously, and one which is very intriguing to consider.

He said (and I am paraphrasing here) that he has been considering the possibility -- and has arrived at the conclusion -- that the spraying of highly reflective particles into the atmosphere may well be serving as the equivalent of chaff, a countermeasure employed by aircraft during military missions in order to throw up reflective signals which create big "clouds" on enemy radar screens, helping to prevent enemy radar operators from identifying the precise location of the aircraft throwing out the chaff.

But, while conventional chaff is used to mask an airplane from radar, my understanding of the theory Mark McCandlish articulated at the end of the evening in day one of the Secret Space Program conference is that he believes that the blankets of reflective material spread across the sky as chemtrails may be used to "disguise exotic propulsion" by craft which are already using technologies which may mask them from radar and which may also be using technologies which mask them to some degree from our ordinary vision.

In fact, he described seeing one such craft himself, which was almost invisible to the naked eye, but whose outlines could be barely discerned due to the fact that it was sunset at the time of the sighting and some of the edges of the cylindrical craft were outlined by a thin line of reflection (if the video of the Q&A discussion from the end of the day is posted online at some point, I will try to come back later and link to that video here so that others can hear the exact description of this incident in Mr. McCandlish's own words).

Previous posts on this blog have examined the chemtrail phenomenon, including possible explanations, but none of the explanations I have ever encountered have included the possibility that chemtrails may be being laid down in areas where secret craft using exotic propulsion systems or other exotic technologies are known to operate (including in Southern California, where I frequently see heavy chemtrail activity).

Some of those previous posts have included photographs I took myself showing trails which are very difficult to explain away as "normal condensation trails left by jetliners." This ludicrous explanation continues to be propagated as the rational explanation behind the "chemtrail conspiracy theory" on conventional-paradigm-defending sites such as Wikipedia (search for the word "chemtrail" on Wikipedia and you will be redirected to a page entitled "chemtrail conspiracy theory" which condescendingly declares that, "Although  proponents have attempted to prove that the claimed chemical spraying does take place, their analyses have been flawed or based on misconception" and "Scientists and government officials around the world have repeatedly needed to confirm that supposed chemtrails are in fact normal contrails" -- Wikipedia, 06/29/2014, 01:05am Pacific).

The image above is one that I photographed myself just this past week, over the distinctive "morro" mountain features of San Luis Obispo, California (photo taken on Monday, June 23, at 1609 hours, from my bicycle). If someone can explain how, in the words of the patronizing Wikipedia entry, the above photograph can possibly be explained by someone who maintains that "supposed chemtrails are in fact normal contrails," I'd be interested in their written analysis (the author of such an explanation is invited to post it on the web and link to it on my Twitter or Facebook account so that readers can evaluate the argument for themselves).

Is the jet plane producing the supposedly "normal contrail" in the above image just giving its San Francisco-bound passengers coming up the coast from LA a few little "extra scenic S-turns over San Luis Obispo"?  Have you ever been on a jetliner that decided to take a few S-curves like this for some reason? Perhaps the captain came over the address system and said something like, "Well, folks, we've reached our cruising altitude here, and those of you on the left side of the aircraft should be able to see the beautiful waters of the Pacific and the famous Morro Rock -- and let me just do a few big meandering curves all over the sky to let you really take that in, and to give our passengers on the right side of the aircraft a chance to get out their iPads and take some photos of it too."

It might be argued that some kind of strange wind effect operating on one particular part of the sky created one of the big loops in the trail above, but which direction would that wind effect be coming from? The problem with the above photo is that it has not one but two big "bights" in the trail, and so if one wishes to explain it as a product of some kind of wind phenomenon, it would seem that two unusual wind streams would be required, one essentially blowing away from the camera (on the right side of the photo as we look at it), and one more blowing towards the camera to create the bight on the left side of the photo as we look at it.

I can attest to the fact that this photograph has not been "shopped" or retouched in any way -- it was taken from my inexpensive phone and then posted directly here -- it has been sitting on my phone untouched since this past Monday. If you still believe that "supposed chemtrails are in fact normal contrails" after examining the photograph above (as well as some of the others in the previous posts linked below), then I'd be interested in reading your arguments as to why my assertion that the photo above clearly proves that these are not just "normal contrails" produced by normal aircraft is incorrect.

Previous posts from this blog on the subject of chemtrails include:
Mark McCandlish's suggestion, which provides a clear connection between the as-yet-unexplained (but undeniable) phenomenon of chemtrails and the test-flights (or operational flights) of secret craft with exotic propulsion systems and equally exotic cloaking technologies is compelling, and worthy of greater consideration and wider discussion. Again, this was by no means his central point of discussion today, and his other points are extremely important and presented with a clarity that was most impressive, but this assertion made at the very end of the day also deserves to be noted.

On the other hand, the unsupported arguments on Wikipedia and other conventional-paradigm outlets that chemtrails simply represent "normal contrails" and that all the "conspiracy theories" suggesting otherwise can be waved away with the unsupported assertion that "their analyses have been flawed or based on misconception" are barely worthy of rebuttal.

Posted by David Warner Mathisen at 1:49 AM