The universe conspires to rescue a squirrel 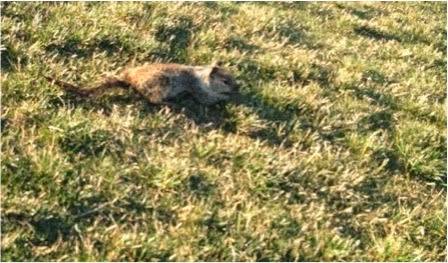 The other day my older son had two basketball games with his high school team, which were held at a nearby community college. The games were an hour apart, and so in between the two games, my wife decided to run some laps on the track at the college, which was completely empty. My younger son and I went along as well to get outside and enjoy the sunshine in between games.

There were some young palm trees planted around the outside rim of the field, and he found a very solid palm tree husk and was playing with it to keep busy, in between pushing around some tires that were also lying around and taking some laps with my wife. Towards the end of the hour, when it was almost time to go, he noticed some deep holes next to the long-jump pit, which are used to allow the trainers to move a low hurdle into two different positions (athletes practicing the long jump sometimes train by taking off over a low hurdle, positioned at the end of their approach run and in front of the sand-filled pit where they will land).

The low hurdle wall was already in place in one set of the holes in front of the pit (which was covered, since the track was not in use) but the other set of the holes were exposed (see image below): 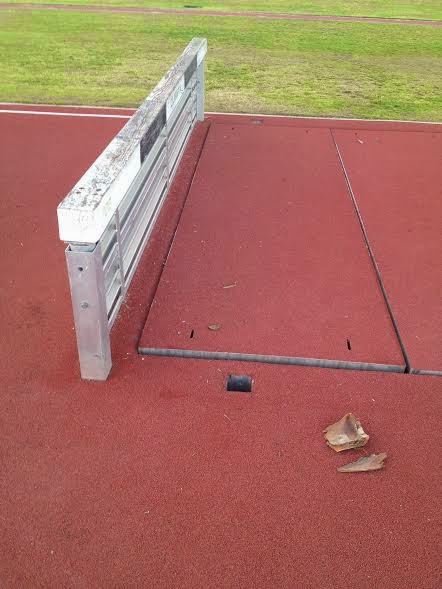 Looking into the hole, he saw that it was so deep he could not even see the bottom. Hoping to see just how deep it went, he inserted the narrow end of the palm husk (shaped just like those seen in the second photo on this page). He heard a squeak. He wasn't sure why the husk would make that noise -- and then he heard the squeak again and realized to his horror that a squirrel had fallen into the hole at some point and was trapped at the bottom!

He quickly called us over and we tried to figure out how we could get the squirrel out. The palm husk was not actually long enough to reach him (or her), and besides it was so narrow that the squirrel couldn't really move his body around to maneuver into position to climb out (it was so deep that he could not be seen until we shined a light down). We tried lowering the empty sleeve of my wife's thin hooded sweatshirt also without success. I even ran over to the pole-vault pit and borrowed a vaulting pole, but the squirrel would not or could not climb up anything that was offered.

It seemed there was nothing else for it but to reach in and try to pull the squirrel out, which wasn't really my first choice of rescue methods. Reaching into a hole with an unknown squirrel at the bottom felt a little like the scene from the 1980 movie version of Flash Gordon, when Flash Gordon and Prince Barin have a little test of nerves by reaching their hands into the big hollow tree stump containing the poisonous "wood-beast."

Here's an image looking down into the hole (it's the closer of the two open squares in the image above): 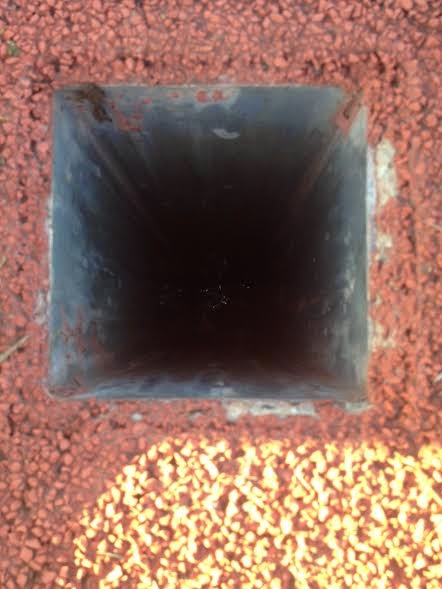 What a lonely and terrifying place for that poor squirrel to be trapped!

With some trepidation, I reached down into the hole, and although I have pretty long arms I was unable to reach all the way to the squirrel before hitting my deltoid against the edges of the opening.

Withdrawing my arm, I began to feel that we had exhausted all our options. I had the sickening feeling that we might have to leave the squirrel in there to die, and imagined how miserable it would be. I tried not to think of it turning into a little skeleton down there at the bottom of the long-jump training-wall post-hole.

Shining the light down into the hole, we could see the squirrel's fur and it seemed as though it was barely breathing. After racking my brains for any other solution, I decided to see if perhaps I could get my deltoid past the edge of the hole and somehow reach the squirrel's back. I pulled my sleeve all the way up over my shoulder and reached down again, and slid my arm all the way down up to the very top of my arm, and found that I could just barely touch the squirrel's back with the outstretched tips of my middle and index fingers. The squirrel made a little chattering noise when I made contact with his  (or her) back.

But it was too deep to get my thumb into the action, which would have made it much easier to pull the squirrel out. I tried to pinch its fur between the fingertips of my index and middle fingers, the only parts of my hand that could even reach down far enough. The fur was so short and so soft that it slipped right out each time I tried to lift him up. On about the third or fourth try, however, I managed to pinch a fold of the animal's skin and rapidly drew him out to safety (my wife jumped back quickly!).

The squirrel sat there blinking its eyes for a second, and then tried to run off, but it kind of staggered around and fell over onto its side a couple of times. Each time it did so, however, it took a little breather and then started off again, and quickly recovered its equilibrium and became more sure of its little hops across the grass of the field. Soon it was hopping along at a good pace and it ran down a little dug-out squirrel hole at the base of the pole-vault pit (see images above and below -- this is obviously a ground squirrel).

We ran to the water fountain and filled an empty plastic water bottle we found in the trash can, and took it over to the little hole at the pole-vault pit, where we filled the shallow palm husk with the water and left it for him. We also attempted to cover the hole as best as possible with a square piece of the same palm husk.

As we hurried back to see the second basketball game (which had already started), we thought about all the things that had to have taken place for us to have even discovered the poor trapped ground squirrel. First, of course, there had to be a basketball schedule with games that were an hour apart. But second we had to all go to the game, rather than just one of us (something we didn't decide until that afternoon). Then, my wife had to actually go through with her plan to take a run on the track in between games, which she almost talked herself out of. Then, my younger son and I had to decide to go with her, rather than hanging out in the gym with the other parents and players.

Then, there had to be a palm husk available for my younger son to encounter. Then, he had to encounter the palm husk and decide to play with it,  rather than just sitting on the bleachers and reading a book or running around the track. Then, something had to draw him to the particular hole where the squirrel was trapped, and he had to have the idea to see if he could reach the bottom of that particular hole with it (he could not).

Additionally, the squirrel had to squeak at him, even though the palm husk was not long enough to actually get anywhere close to touching the squirrel). And then, he had to actually realize that the faint squeak was a trapped animal (it was pretty deep, and at first he thought the sound was just the scraping of the palm husk against the aluminum sides of the hole). Finally, someone had to be present with an arm just long enough and thin enough to (barely) reach the back of the little animal.

While this episode brought that realization out into the open, in fact there are so many areas of our lives in which an equally improbable series of decisions and events and "coincidences" have to take place that it is a wonder that any of us were born at all! Think, for instance, of the chain of circumstances that lead up to anyone meeting their husband or wife.

There are many ways to explain long chains of such improbable events, and "blind chance" is one of them, but that is not the explanation that the ancients seemed to favor. In reviewing the various scriptures of ancient wisdom which deal with this topic, Alvin Boyd Kuhn says in Lost Light:

Buried within the heart of each fragment, then, is the hidden lord of divine life, and from no one is he absent. He dwells there to be the guide, the guardian, the comforter and informing intelligence of the organism. He is the holy spirit, the flame, the ray, the lamp unto our feet. Says St. Paul (I Cor 4:7): "For God, who commanded the light to shine out of darkness, hath shined in our hearts . . . but we have this treasure in earthen vessels." The ancients oft termed this presence the daemon or guardian angel, as in the famous case of Socrates. He is that attendant monitor who stands behind the scenes of the outer life, instant to bless, ready to save, a never-failing help in trouble. His counsel is never lacking, if one seeks it or has not previously stilled its small voice. It reasons with us until many times seven. It abides within our inner shrine, patiently awaiting the hour of our discovery and recognition of its presence. 216-217.

This, or something like it, seems to almost certainly be responsible for the rescue of one small ground squirrel, trapped in a deep hole, all alone. 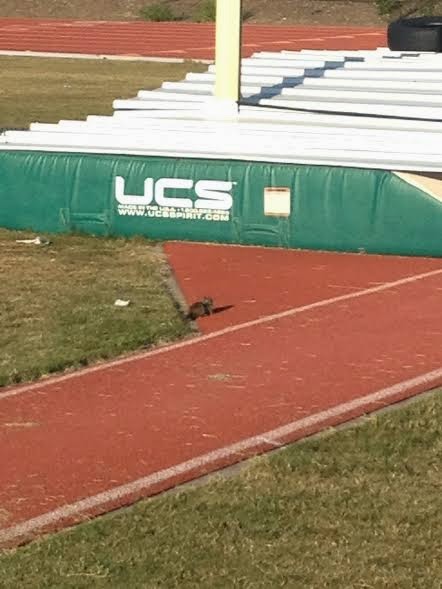 The squirrel hops away to the pole-vault pit, where he (or she) had a little burrow.
Posted by David Warner Mathisen at 8:15 PM