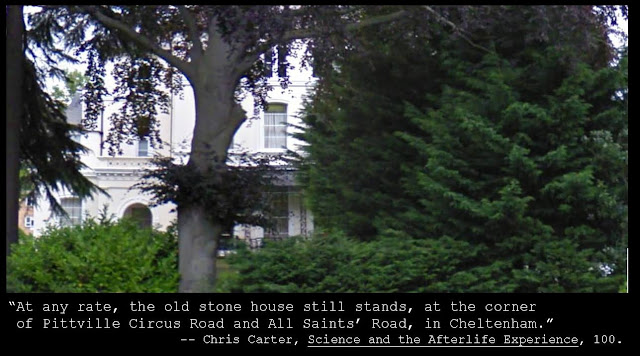 Previous posts have discussed the pervasive belief in strict materialism that has taken hold of much of "western society" in the past hundred to one hundred fifty years (see for instance "The ideology of materialism," from June 13, 2012).

This ideology is aggressively taught in schools and universities, and reinforced in "nature shows" and films and news stories from the conventionally-approved sources.  We are constantly told that strict materialism is "scientific," and that any doubts about the absolute truth of the materialistic dogma are "unscientific."  Those who question it can face professional criticism, censure, and ridicule.

However, there is extensive evidence calling this materialist ideology into question, evidence which critical thinkers should at least consider before blindly accepting the conventional materialist teachings.  Some of this evidence has been discussed in previous posts, such as
and
This is an important subject with connections to many fields of inquiry which might at first seem unrelated to it.

I personally believe that an adherence to a strict materialist dogma can lead to rejection of the evidence showing extremely advanced scientific knowledge in extremely early civilizations, because alternative historical paradigms involving "lost civilizations" with advanced knowledge threaten the Darwinist timelines that many materialists cling to like a lifeline.  Some examples from the massive pile evidence suggesting an extremely advanced lost ancient civilization are discussed in this and this previous post, although many more could be offered.

Because he systematically and thoroughly examines various types of evidence that human consciousness can exist apart from the body, and in fact may well survive the death of the body (in contradiction to the strict materialist paradigm), the works of Chris Carter become all the more noteworthy in light of the discussion above.  I previously discussed his latest outstanding work, Science and the Afterlife Experience: Evidence for the Immortality of Consciousness, and provided a short description of one of the most memorable pieces of evidence in his book for the survival of consciousness (the full account in the book itself is even more memorable, and well worth reading at the source).

Another spine-tingling case study presented in Chris Carter's book (which again deserves to be read in full in the book itself, and is only briefly summarized here) is the case of the Cheltenham ghost.  This involved an apparition seen by numerous observers on numerous occasions in a large residential stone house in Cheltenham, England, between the years 1882 and 1889.

In addition to the family members and visitors to the house who reported seeing the ghost (and the dogs which appeared to react with nervousness or fright at its appearance), the haunting was investigated by at least two members of England's Society for Psychical Research during the period of the sightings, including one described as "one of the SPR's most skeptical investigators," and they tried various tests to see if it could have been some kind of hoax or have some other non-supernatural explanation, but eventually rejected most of these possibilities.

The apparition at the Cheltenham house was described as a tall woman in black.  The first to see her, Rosina Despard, was a member of the family who lived in the home, and was a nineteen-year-old medical student in 1882, when she first saw the ghost.  Chris Carter presents her description on page 94:

The figure was that of a tall lady, dressed in black of a soft woolen material, judging from the slight sound in moving.  The face was hidden in a handkerchief held in the right hand.  This was all I noticed then; but on further occasions, when I was able to observe her more closely, I saw the upper part of the left side of the forehead, and a little of the hair above.  Her left hand was nearly hidden by her sleeve and a fold of her dress.  As she held it down a portion of a widow's cuff was visible on both wrists, so that the whole impression was that of a lady in widow's weeds.

The book presents numerous other first-hand accounts, and they are enough to send shivers through the reader.  Rosina also tried experiments, possibly suggested to her by the investigators from the SPR, such as gluing fine strings across the stairway that the lady in black would often descend, but wrote that on at least two occasions the figure passed right through them and that they were later found to be intact upon examination.  Later sightings were also reported by servants who had not been told about the apparition (the family apparently wanted to keep these sightings somewhat private at first, fearing for Rosina's medical career and reputation, and for the value of the property itself).

They reported that the sightings were most numerous in the months of July and August of 1884, but that they became less frequent and the figure itself less distinct by 1886, and that reports were infrequent after that, ceasing entirely after 1889 or so.

Chris Carter's book provides various possible "materialistic" explanations for this series of events, some of which were offered at the time and some of which have been proposed later, but he points out numerous problems with all of them.  The reader can decide for himself or herself how convincing the evidence is in this case and in the others that are offered in the book.

While I am generally of the opinion that no single data point should be decisive when reaching conclusions about complex and momentous questions, such as the existence of an advanced ancient civilization that upends conventional historical models, or the survival of human consciousness after the death of the body, it is certainly important to examine as much evidence as possible, and the eyewitness accounts of the Cheltenham ghost are a very important series of "data points" in the debate over materialism.

I would again recommend all of Chris Carter's books on the question of consciousness, and that readers keep an open mind about the strong likelihood that our consciousness exists on a plane that is beyond the strictly material.
Posted by David Warner Mathisen at 10:43 PM