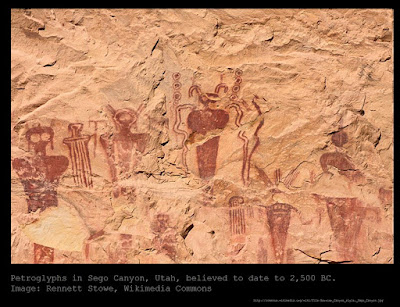 In the previous posts discussing the knowledge of the Dogon (see here, here, and here), we made the point that the knowledge apparently preserved by the Dogon poses an enormous dilemma for conventional naturalistic explanations of humanity's ancient past.

We argued that such knowledge could be explained by invoking the supernatural, or it could be explained by invoking the extraterrestrial, but that it was very troubling to what we might call the "conventional naturalistic" narrative that dominates the education of children, which tries to explain all of human history without having to resort to either one (most 4th grade teachers in the US would not teach their class that alien contact was necessary to explain some of the knowledge or artifacts found in history and preserved around the world, and most university professors probably would not either).

Advocates of the conventional naturalistic framework generally either deny that Dogon art and tradition is actually referring to objects such as Sirius B (a white dwarf too small and too dim to see without advanced astronomical technology, due to its proximity to the extremely bright Sirius A) and the four largest moons of Jupiter (also too far away to perceive with the naked eye, although they are called the Galilean moons of Jupiter because they can be seen with telescopes such as the one Galileo used to observe them and report them in the period 1609-1610). Either that, or they argue that modern astronomical knowledge was somehow conveyed to the Dogon and the Dogon absorbed it so deeply into their most sacred and secret traditions that it appeared to be their own even though it was not.

However, as Robert Temple demonstrates with ample evidence in his book the Sirius Mystery, refuting the Dogon is not sufficient to get past this issue, because it appears that ancient civilizations knew much more about Sirius than the conventional narrative would like to admit, as well as about the size and shape of the earth itself -- in fact, he demonstrates that ancient civilizations including the ancient Egyptians may have been the original source of the Dogon traditions.

It would seem that one could explain such extremely advanced ancient knowledge by resorting to a theory about ancient extraterrestrial contact, or by resorting to a theory of supernatural creation of the human race (ie, mankind did not crawl upwards into civilization from extremely primitive ancestors but was relatively advanced almost immediately if not immediately). There may be other possibilities beyond the supernatural or the extraterrestrial routes, but the conventional Darwinian explanation seems to have some problems with extremely advanced ancient knowledge in the very earliest civilizations that we know about.

There is also something of an evolutionary timeline problem if you keep pushing things back to successive generations of aliens. Scientists who believe in the Big Bang theory (which has its own set of king-sized problems, as we discussed in this previous post) generally say that it took place 13.7 billion years ago. Then, according to that theory, there was some amount of time required for the first stars to coalesce, and then another fairly substantial amount of time for those first stars to go through life cycles that eventually produced later stars with more complex elements. Only then could life forms begin to evolve, and they couldn't begin to evolve right away even then, since their evolution would require the introduction of self-replicating molecules, somehow, and you have to allow some period of time for those self-replicating molecules to develop.

If all earthly evolution didn't get started until some very advanced aliens brought self-replicating molecules here, then we have to put that first importation of alien molecules pretty far back in the past, which pushes the long process of evolution which produced those aliens even further back in the past, and this causes some problems with available time (not to mention the still-unresolved question of how the remote one-celled predecessors of those aliens got their self-replicating molecules).

Nevertheless, the extraterrestrial explanation is satisfying to some people (including, apparently, Dr. Dawkins). There certainly appears to be some evidence to support the extraterrestrial view, including some of the drawings and legends of the Dogon discussed by Robert Temple, as well as some of the artwork and myths of ancient civilizations, such as the histories that mention the Oannes. There are ancient petroglyphs around the world which seem to suggest extraterrestrial life forms as well, such as the one shown above (from Sego Canyon, Utah) or this one from New Mexico (and there are thousands of others).

The main point is that the conventional naturalistic worldview, the one which held sway in the late eighteen hundreds and early nineteen hundreds in England and the US -- which did not see the need for aliens and which inspired stark naturalistic literature such as the novels and short stories of Jack London -- the worldview which is still generally taught to children in schools and universities, should really be identified as the historical relic that it is, and placed in a museum.

In the twenty-first century, based on mounting evidence that the establishment chooses to either ignore or to ridicule, the choices really seem to be between supernatural and extraterrestrial (or perhaps both).