The equinox and the plane of the ecliptic 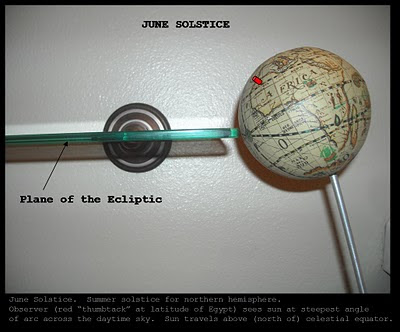 The earth is approaching the point on its orbit known as the September equinox (autumnal equinox for observers in the northern hemisphere, where it is autumn, although it is spring in the southern hemisphere).

The diagram above is an attempt to diagram the cause of the solstices and equinoxes a little differently than they are usually shown. The horizontal glass plate represents the "plane of the ecliptic" -- that is, the plane upon which the orbit of the earth takes place around the sun. Imagine the sun as being to the left on this image.

Note that the sun itself will trace out a path across the daytime sky along this plane, but it will not be "horizontal" to an observer on earth. To understand why, take a look at the above diagram, in which an observer is represented by a red "thumbtack" pushed into the earth (OK, it's a low-tech computer generated thumbtack). To this observer, the sun will actually arc high across the sky, but always at an angle less than 90 degrees, and tilted towards the southern horizon.

The earth in the image above is at the June solstice, so the north pole is aligned towards the sun (as directly "pointed at" the sun as it ever gets). Note that the antique-style globe in the image has an equator depicted -- this equator can be projected into the celestial sphere to give the "celestial equator" (90 degrees from the celestial north pole -- for more discussion of the celestial sphere, re-visit the web pages of the Polynesian Voyaging Society and the blog post here). During the day (looking towards the plate of glass in the photo above from the observer's red thumbtack on the globe) the sun will be above the celestial equator, but at night (looking out into space toward the right in the photo) the ecliptic path (which the planets generally follow as well, since they are orbiting the sun very close to this same plane of glass) will be below the celestial equator.

In the image below, the globe is shown at the position of the December solstice, and now the north pole is pointed left and the sun would be located to the right of the photo (along the plate of glass or "plane of the ecliptic"). 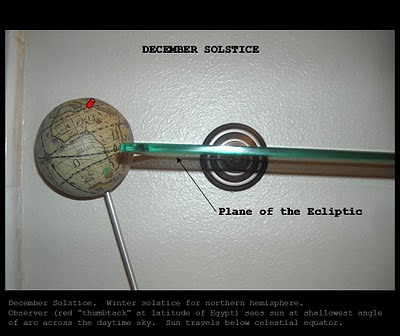 Notice that our observer is still represented by a red "thumbtack" pushed in to the same latitude (the latitude of Egypt, home of those ancient celestial observers). Look at how much shallower the path of the sun will be across the daytime sky for this observer. It will be much closer to his southern horizon. It will cross the sky south of the celestial equator -- it will follow a path between the celestial equator and the southern horizon. Note that at night, when the earth rotates our little red observer to the left and he gazes left into the night sky (away from the sun) he will see that the ecliptic path of the planets and zodiac constellations is actually above the celestial equator (towards the north celestial pole).

These two diagrams should help to illuminate the reason that the sun's arc does not remain at the same tilt throughout the year -- if the sun's arc were a rainbow, the rainbow would be tilted at a steeper angle through the sky on the summer solstice and at a much shallower angle (tilted way more towards the horizon) on the winter solstice. This fact was depicted in a diagram from a post back on the time of the June solstice this year (that diagram is reproduced again below). 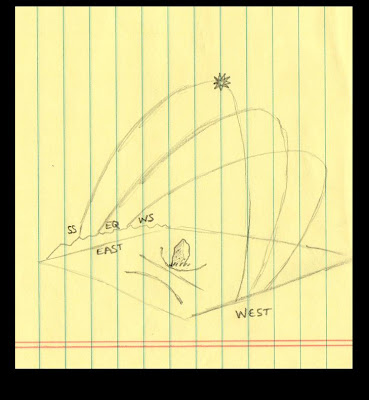 Armed with this understanding, we can now understand that the equinoxes take place when the earth is going around the plane of glass in the diagrams and the sun is "broadsides" to the earth (if the earth were a ship and the north and south poles were the bow and the stern, the ship would be going past the sun such that the sun was directly off the starboard or larboard side). Because of this, as the earth rotates, the sun will rise precisely in the east and as it continues to rotate the sun will set precisely in the west. The diagram below shows the earth going by the sun on an equinox -- think of it as a ship if that helps. 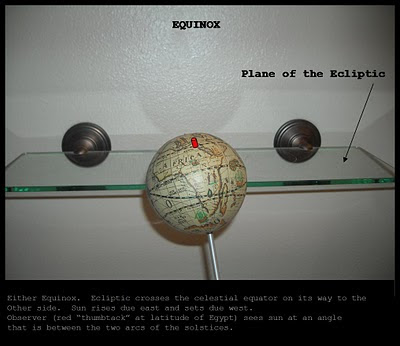 This year, the ecliptic crosses the celestial equator on the morning of September 23 (the date is a function of the Gregorian calendar, so the date shifts a bit from one year to the next until the next leap year keeps the dates from drifting too far).

Considering the plane of the ecliptic helps give a greater understanding of the mechanics of the solstices and the equinoxes.


Posted by David Warner Mathisen at 12:37 AM