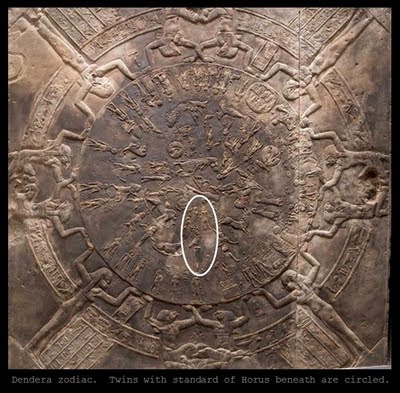 In the previous post, we discussed the evidence that the cave paintings at Lascaux contain images that can clearly be shown to represent celestial constellations -- a truly astounding allegation. In fact, it is such a powerful piece of evidence refuting the conventional timeline of human development that it deserves to be revisited in much greater depth.

In the previous post, we noted the evidence which has received the most attention so far, which is the existence of six dots in an arrangement which traditionally represents the Pleiades, painted in the proper location relative to the enormous Bull #18 image in the Hall of the Bulls at Lascaux.

However, in addition to that, we examined the so-called "Panel of the Wounded Man" in which a bird-headed man (who is drawn from two parallel lines) is inclined at a forty-five degree angle between a bull and a rhinoceros with a tail in the form of the stars in the head of Leo. We saw that the presence of the bull and the Leo-shape indicate that these parallel lines leaning at an angle (the "wounded man") represent the constellation Gemini, the Twins (a constellation which itself consists of two parallel lines, and which appears to incline at the same angle).

We pointed to articles discussing this compelling evidence, and noting that below the wounded man is a bird on a post or pole (see image below). 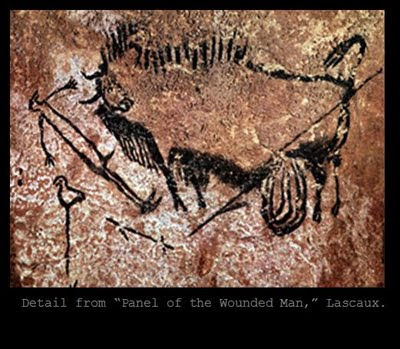 Most astonishing was the incontrovertible fact that in the famous Round Zodiac of the Temple of Hathor at Dendera, a Horus-falcon is depicted upon a post directly below a depiction of the Twins of Gemini, in exactly the same location as the bird-on-a-pole relative to the "wounded man" at Lascaux! See the detail from the Round Zodiac below: 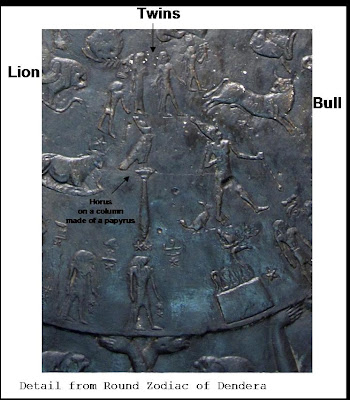 This correlation is truly significant, as it puts the defenders of the orthodox timeline of human history in an extremely uncomfortable position.

First of all, it is very difficult to argue that there is absolutely no cultural connection between these two works of art. The stars in the sky certainly suggest shapes, and it is perhaps possible to argue that two completely isolated human cultures would group the same stars into the same groupings even without any contact with one another.

It is even possible to suggest that some of these groups would suggest identification with the same animals -- the long sinuous form of the Scorpion, perhaps, and even the "V"-shape of the horns of the Bull, Taurus (although the "V"-shape is much less suggestive of a bull than the stars of the Scorpion are suggestive of a scorpion, and in the Mathisen Corollary book itself, I discuss the fact that the "V"-shape of Taurus was also interpreted to resemble an adze in addition to a bull).

However, it is extremely difficult to argue that the stars below Gemini are at all suggestive of a bird on a pillar, and that this image would be seized upon by two completely disconnected cultures which never shared any form of contact.

And yet, this is exactly the argument that defenders of the conventional history must take, if they wish to explain the undeniable similarity between the images at Lascaux and the Round Zodiac of Dendera. The conventional timeline declares that Lascaux is the product of Upper Paleolithic humans operating as far back as 17,500 BC.

Here is an essay typical of the treatment this cave art usually receives, from the website of the Metropolitan Museum of Art website. While acknowledging that they represent a tremendous achievement in the history of mankind, the author of the article describes the paintings from the perspective that their creators were hunter-gatherers who chose to depict animals of "species that would have been hunted and eaten (such as deer and bison) as well as those that were feared predators (such as lions, bears, and wolves)."

The bird on the pole, and its clear connection to the Dendera zodiac, causes a king-sized problem for interpretations like this one. Arguing that these images simply manifested themselves in two cultures with no cultural contact is very unconvincing. However, another alternative -- that there could be some cultural contact between a culture operating in France around 17,500 BC (or even 15,000 BC as the article from the Met's website alleges) and the culture of ancient Egypt that produced the Dendera zodiac (which dates to as recent a date as 50 BC, although some scholars have argued that it is almost certainly patterned upon an earlier model, as was common in ancient Egypt) -- is equally difficult to argue convincingly.

How could a specific set of artistic conventions survive for over 17,000 years (or for nearly 15,000 years, if we select a later date for the creation of Lascaux)? Such a possibility becomes absurd when considered carefully. Fifteen thousand years is more than seven times the number of centuries than the number that separate us from the artists who created the Dendera zodiac. In order to argue that artistic norms were somehow transmitted intact across such a vast gulf of time, one must make various assumptions, all of them distasteful to conventional theories of ancient history. One explanation for such preservation might be the existence of some civilization that existed for many thousands of years before the Egyptians. Another, more plausible explanation might be that the accepted date for the painting of the cave art at Lascaux is incorrect and that it was not actually painted in 15,000 BC or 17,500 BC.

Because it is extremely difficult for conventional theorists to explain how such an image could turn up in two isolated cultures, and because arguing for cultural contact is extremely difficult if the orthodox dates for Lascaux are maintained, conventional academia appears to be ignoring the celestial aspects of Lascaux altogether (and instead chooses to discuss the images as desired hunting targets, or powerful predators that early human hunters wished to emulate).

Such a possibility appears to be much more likely than the possibility that the conventional theory of Lascaux, which is confidently taught to children in schools in their segments on "early humans," corresponds at all to reality and the truth.
Posted by David Warner Mathisen at 12:12 AM