The hydroplate theory and the destruction of Comet Elenin 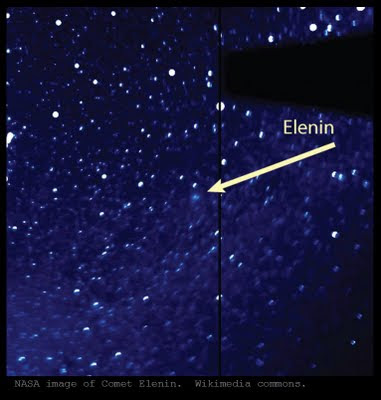 Earlier this year, a comet discovered in 2010 by Russian amateur astronomer Leonid Elenin was generating numerous theories of collision with earth and other doomsday scenarios (some speculated that it had hordes of alien spacecraft trailing in its wake enroute to a rendezvous with earth).

However, recent observations show Comet Elenin dropping rapidly in brightness and exhibiting signs associated with disintegration, suggesting that it may be tearing apart (see for example this article from Sky & Telescope). Note that Comet Elenin is not to be confused with another comet which is currently visible in the night sky, Comet Garradd.

Comets in fact are quite fragile and susceptible to being torn apart by the gravity effects of planets and the sun, including the same gravitational forces which cause the tides on earth and which are explained in this previous post.

This fact is powerful evidence against the conventional theory that argues that comets originate in a speculated "Oort Cloud" located some distance outside the boundaries of the solar system. The reason that the fragility of comets argues against the Oort Cloud is as follows:
Comet Elenin, a long-period comet, is apparently being torn apart right now. This event is an example of the problem that faces those who postulate an origin of comets outside of the solar system.

This line of argument, and much more detailed scientific evidence to support this line of reasoning, is presented by Dr. Walt Brown in his online book about the hydroplate theory. Dr. Brown explains that the events surrounding the cataclysmic global flood event would have launched water into space at tremendous velocities, sufficient to explain the origin of comets. His theory would explain the existence of short-period comets. It would also explain why long-period comets still exist, despite their fragility (because he presents evidence that this flood event took place only several thousands of years ago; theories which postulate comets circling the sun for many millions of years must be able to explain why they have not all been ripped apart or swept away by planets, particularly Jupiter and Saturn).

The hydroplate theory is not mere speculation, but is supported by literally many hundred solid pieces of geological evidence on earth. It is also supported by many details in the solar system, including the composition and behavior of asteroids, and of comets.