The rings and moons of Saturn 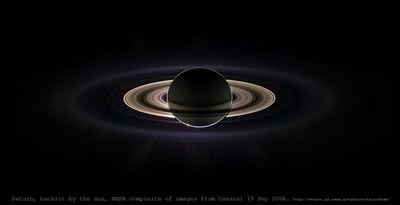 The spacecraft successfully delivered its 705-pound Huygen probe to the surface of Titan at the beginning of 2005, and the Cassini orbiter continues delivering stunning images of the ringed planet and its moons. The gorgeous image above is actually composed of 165 images taken almost exactly five years ago, on September 15, 2006 (as explained here on NASA's website). As described in this recent article, the image was taken by Cassini from the dark side of Saturn, so that the sun was blocked by the massive planet, but the sun's light illuminated the incredible rings.

More recently, a video has appeared on YouTube composed of actual HD images from Cassini, and they are similarly breathtaking and unworldly (see below):

The rings of Saturn pose difficulties for conventional explanations of the origin of the solar system and planets. As NASA planetary scientist Jeff Cuzzi has explained (for instance in this article), the rings cannot have been formed 4.8 billion years ago, when conventional timelines place the formation of Saturn and the other planets.

The conventional theories used to argue that the rings of Saturn and the other planets with (less spectacular) rings were leftover from the clouds of dust that supposedly congealed to make the giant gas planets (another phenomenon that is difficult to explain). However, as Dr. Walt Brown has pointed out in his online version of his book In the Beginning: Compelling Evidence for Creation and the Flood, more recent data and analysis indicates that the rings could not possibly have survived for so many billions of years and must be attributable to a more recent phenomenon.

In fact, Dr. Brown cites a 1985 article from Sky & Telescope in which NASA scientist Jeff Cuzzi states that the rings of Saturn would be dissipated in no more than 10,000 years! This means that they are either younger than that, or that they are being replenished somehow (or both).

The Cassini spacecraft's flyby of Saturn's moon Enceladus (and other recent observations of Enceladus) determined that Enceladus is in fact currently jetting water and ice and thereby replenishing Saturn's E-ring. This discovery is consistent with Dr. Brown's theory for the origin and composition of asteroids as coming from Earth during the events surrounding a violent rupture and global flood, some evidence for which we examined in previous posts here and here, as well as in discussions of the water on the surface of Mars far from the polar ice caps in this post here. He explains more details regarding the Enceladus findings on his website here in conjunction with his discussion of the origins of asteroids and meteoroids (some of which have been captured as moons by other planets, including Saturn).

The events described by Dr. Brown's hydroplate theory would also explain the possible source of the organically-produced methane that has been detected both on Mars and on Titan. He notes that the salt water being ejected by Enceladus has a salt content very similar to that in earth's oceans, and believes that the origin of this water is in fact earth. He also believes that the methane found in the solar system originated on earth.

The fountains of the great deep also launched vegetation fragments containing bacteria, so bacteria and their food were in comets, asteroids, and meteorites. Living, but dormant, bacteria have been discovered in meteorites, and it has long been known that comets contain methane. Therefore, besides providing water that flowed on Mars, comet and asteroid impacts also delivered “methane-producing machines” and their food.

Dr. Brown has further predicted that "Bacteria will be found on Mars. Their DNA will be similar to Earth’s bacteria. Furthermore, isotopes of the carbon in Mars’ methane will show the carbon’s biological origin." If similar bacteria or methane are detected on Titan, this would also appear to be supporting evidence that would tend to confirm Dr. Brown's theory and predictions.

These aspects of the amazing planet Saturn and its rings and moons should be kept in mind as further information is sent back to us from the indefatigable Cassini spacecraft.
Posted by David Warner Mathisen at 11:25 PM