Neutrinos, the speed of light, and the Big Bang theory 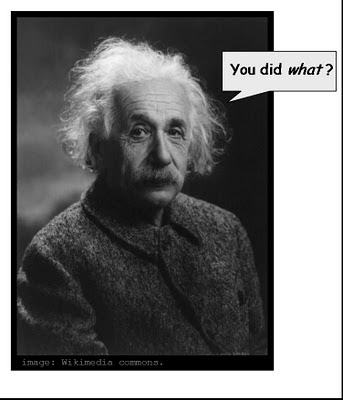 On Friday, representatives from an international team of 160 physicists announced to the world the results of experiments conducted at the CERN particle accelerator in which neutrinos launched from Geneva, Switzerland arrived at a cavern underneath Gran Sasso, Italy -- 454 miles away -- faster than a beam of light would have.

This result was so shocking and unbelievable that the physicists conducted over 15,000 tests for about six months to verify their results, and even after all that they still don't believe it. In announcing these anomalous findings to the physics community, they explicitly invited the help of any and all comers to discover what they could have done wrong. Even after extensive testing, they are far more ready to admit that they must be overlooking something, anything, than to admit that anything in the universe can travel faster than the speed of light.

The assumption that the speed of light is a constant, and that nothing can travel faster than the speed of light, is an absolutely foundational concept for modern physics and the understanding of the universe. The implications of this discovery, if it proves to be correct and not the result of some kind of error or oversight, are enormous. Some recent articles describing the consternation of the physics community (as well as describing the experiments that led to Friday's announcement) can be found here: New York Times, Wall Street Journal 1, Wall Street Journal 2.

Not only does the possibility that neutrinos can travel faster than light throw modern physics (and Einstein's theory of relativity) into disarray, but it also has implications for the assumptions and models that gave rise to the Big Bang theory for the origin of the universe. As explained in the first Wall Street Journal report on Friday's announcement (linked above), "The light-speed notion is also partly the basis for Einstein's theory of gravity. That, in turn, is the starting point for existing theories about how the universe evolved."

That article cites physicist Dr. Neil Turok, director of the Perimeter Institute for Theoretical Physics in Ontario, Canada, as saying about this neutrino speed record: "It would be the biggest physics discovery in a century because we'd have to completely revise everything from subatomic physics to what we know about how the universe evolved." Dr. Turok (like most physicists not involved in the original experiments themselves) is skeptical of the findings.

That article also points out, however, that scientists at the Fermilab in Illinois apparently clocked neutrinos traveling faster than the speed of light in research a few years ago. Those experiments, however, were "below the threshold of precision needed for making a scientific claim," according to Dr. Robert Plunkett, who was involved in that earlier work and who will now go back to revisit the results. The more recent CERN experiment was not below the necessary "threshold of precision."

One of the first to point out the stunning implications of this new research for the prevailing theory of the Big Bang (which itself is a central dogma in the prevailing cult of Darwinism that currently dominates most of Western academia) is international social reformer Vishal Mangalwadi, who with his wife has labored since 1976 for the empowerment and liberation of the peasants and lower castes of India. In an email yesterday entitled "Will the 'Big Bang' Theory Blow Up Now?" he points out that the assumption that nothing could travel faster than the speed of light in a vacuum was "one of the bases for calculating the age of the universe to be 13.7 billion years," and that:

The new observations – if confirmed – will send the scientific community back to the drawing board. They will need to question their fundamental assumptions and only if one or more assumptions gain general acceptance they could re-start constructing models totally different than we have taken for granted for decades. Scientists may have to now slaughter sacred cows of the 20th century science.

In his groundbreaking work on the hydroplate theory, Dr. Walt Brown (a graduate of West Point and MIT) discusses several scientific reasons that the Big Bang theory may be flawed, none of which have to do with this startling new neutrino study (all of them published before this new possibility about the speed of light became public).

He points out that the evidence usually cited as "proving" the Big Bang has serious problems (including the famous "red shift" data, the Nobel-prize winning Cosmic Microwave Background Radiation data, and the data on the amount of helium in the universe). Further, he notes that although astrophysicists interpret this data as indicating that the Big Bang took place 13.7 billion years ago, the models of stellar evolution based on the Big Bang indicate that some stars in extremely distant galaxies would have to be at least 16 billion years old -- a finding which calls the entire model physicists are using into question.

He also points out that the Second Law of Thermodynamics (which so far has not been shown to have any flaws) would mean that the universe in the far distant past was more organized and more complex than it is today (since the Second Law -- the Law of Entropy -- states that everything tends to deteriorate and grow less organized rather than the reverse). It is contradictory to argue that the universe was more organized immediately after the Big Bang than it is today, and the Big Bang theory does not argue that it was, but if not then the Big Bang theory is in conflict with the Law of Entropy.

Evolutionists can undoubtedly resolve these time contradictions—but at the cost of rejecting some cherished belief. Perhaps they will accept the possibility that light traveled much faster in the past. Measurements exist which support this revolutionary idea. [See page 377.]

In other words, even before this new possible finding from the neutrino experiment at CERN, Dr. Brown noted that the contradictions in the current scientific models regarding the origin of the universe suggest that the speed of light may not be a constant the way modern physics assumes that it is. Even if the recent findings about neutrino speeds are proven to be mistaken, the Big Bang theory still has king-sized problems.

The larger point to be taken from this specific series of CERN experiments is that the most cherished assumptions which undergird modern theories (many of which the defenders of orthodoxy declare are "proven," "settled science," "established fact," and things that we "know" -- such as the quotation above from Dr. Turok regarding "what we know about how the universe evolved") should be open to examination, experimentation, and possible revision. If this is true about something as supposedly settled as the speed of light, how much more so for the dogmatically held theories about mankind's ancient past, which are based on far less rigorous science?