Important discovery of alignments among ancient megaliths of India 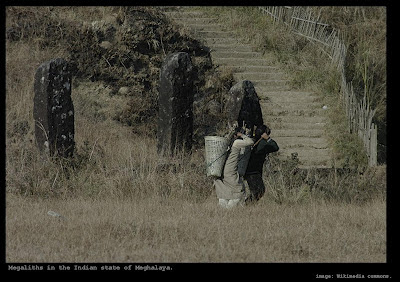 In a recent issue of India's Current Science ("a fortnightly journal of research"), a team of three researchers published a study entitled "Stone alignment with solar and other sightlines in South India."

In the study, Srikumar M. Menon, Mayank N. Vahia, and Kailash Rao present evidence that a group of twenty-six ancient menhirs at a site called Nilaskal Biyana ("field with the standing stones") near Byse in Karnataka contains sightlines created by two and in some cases three stones directed to the summer solstice sunrise and sunset, and the winter solstice sunrise and sunset, as well as possibly to the setting points of several important stars.

The paper, which was submitted last April and accepted earlier this year in February 2012, concludes: "this study provides the first strong evidence of a monument with intentional solar and possible stellar alignments among Indian megaliths" (2).

India contains a wealth of megalithic stone circles, dolmens, and dramatic monoliths. This website, Megaliths of India, by Subhashis Das showcases many stunning megalithic sites in India. A statement at the top of the webpage says, "Strangely they are never promoted as heritages of India and in the process are deprived of the dignity these ancient monuments demand as true relics of our country's prehistory. . . sad."

Note that a little less than a quarter of the way down the page, there is a photograph of a sharply-inclined standing stone aligned with a prominent "V"-shaped notch in the natural visible skyline of Zulzul Hill in the background. The caption reads:

The Birbir megalithic complex comprises of an inclined obelisk (at whose front I stand), one triangle facing due east, a human shaped burial cover with a North South orientation and a Recumbent Mother Goddess Form of the Zulzul Hill at the background. Note how the tip of the menhir aligned to the "V" notch of the hill in the landscape.

This technique is strongly reminiscent of the alignment of standing stones with prominent notches in the natural skyline among the megaliths of New Zealand, categorized by the insightful Martin Doutré on his website Ancient Celtic New Zealand. Among many other possible articles from his site, this one in particular highlights the frequent use of such notches in conjunction with massive boulders to this create alignments, often with the sunrise or sunset on the solstices or equinoxes.

Note also the curious stone "lizard" or "turtle" photographed just below the Birbir menhir mentioned above, made by deliberately altering a very large rock. Interestingly enough, the final two photographs at the bottom of this article by Martin Doutré shows another example of the same kind of large rock sculpture. In the case of the giant lizard cited by Subhashis Das in India, the head faces due east (towards the sunrise on the equinoxes). Similarly, the face at Whangape in New Zealand, which Mr. Doutré believes represents the god Tangaroa, also faces to the east.

Further examination of the many megalithic sites in India might turn up even more remarkable similarities to those in New Zealand. This is an extremely important line of inquiry, as these connections (as well as parallels to sites in Europe which Mr. Doutré details on his site) strongly suggest the presence of inhabitants in the islands of Aotearoa long before the arrival of the Polynesian Maori in the thirteenth century, inhabitants connected to other ancient megalith-constructing cultures around the globe (or perhaps members of a single megalith-constructing culture). The evidence presented by the skull of the "Ruamahanga Woman" suggests the same possibility.

It is also likely that additional rigorous examination of other stone circles and clusters of menhirs in India will reveal further solar and stellar alignments, as well as (most likely) encoded precessional numbers in their dimensions (Mr. Doutré points out many of these in his writings, and I note several additional examples of precessional numbers encoded in dimensions of stone circles and other sites -- some of which I believe have not previously been noted -- in my own book).

Srikumar Menon, Mayank Vahia, and Kailash Rao are to be commended for their work in advancing the understanding of the solar and possibly stellar alignments in ancient stone sites in India. We should all wish them well in their future endeavors and hope that they continue to discover more of these important clues to the ancient past.
Posted by David Warner Mathisen at 12:04 AM