A connection between ancient Egypt and Buddhist monasticism? 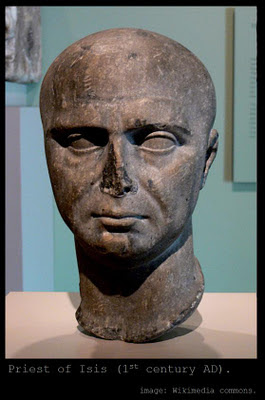 Plutarch, the well-known first century Roman historian, essayist, Platonist, and priest of Apollo at Delphi, wrote an extremely important description of the ancient Egyptian myths surrounding Isis and Osiris in his Moralia (a collection of various essays written throughout his life).

At the beginning of that section (which can be read online in a 1936 translation here), Plutarch takes up the question of why the Egyptian priests of the goddess Isis shave their bodies and wear only linen garments (as opposed to garments of wool, for example).

His explanation is quite illuminating:

It is true that most people are unaware of this very ordinary and minor matter: the reason why the priests remove their hair and wear linen garments. Some persons do not care at all to have any knowledge about such things, while others say that the priests, because they revere the sheep, abstain from using its wool, as well as its flesh; and that they shave their heads as a sign of mourning, and that they wear their linen garments because of the colour which the flax displays when in bloom, and which is like to the heavenly azure which enfolds the universe. But for all this there is only one true reason, which is to be found in the words of Plato: "for the Impure to touch the Pure is contrary to divine ordinance." No surplus left over from food and no excrementitious matter is pure and clean; and it is from forms of surplus that wool, fur, hair, and nails originate and grow. So it would be ridiculous that these persons in their holy living should remove their own hair by shaving and making their bodies smooth all over, and then should put on and wear the hair of domestic animals.

This is interesting in its own right, but also because Buddhist monks to this day shave their heads, and in some cases their eyebrows also. Is it possible that there is some connection, either by virtue of the spread of ancient Egyptian knowledge to ancient China, or (even more likely) the existence of a common ancestral civilization which imparted its knowledge to both ancient China and ancient Egypt?

On the surface, this possibility might seem rather remote. After all, it is certainly possible that the hair-removing habits of Buddhist monks in many parts of Asia (including Tibet) and those of the ancient devotees of Isis arose independently of one another and in complete cultural isolation. However, there are some clues which make this apparently far-fetched idea more plausible. 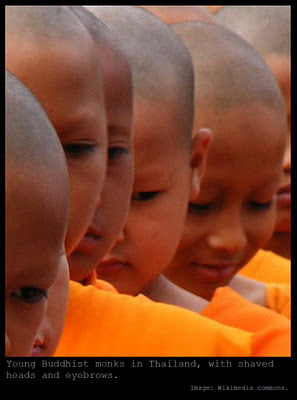 First, there is a passage from Plutarch just previous to the passage cited above, in which Plutarch cites what were apparently ancient phrases for the devotees of Isis: "bearers of the sacred vessels" and "wearers of the sacred robes." These are the only two titles cited, and interestingly enough they reference two distinguishing marks of many ascetic Buddhist orders that exist to this day.

In fact, robes and an offering bowl are among the only things many Buddhist monks may own. There is a quotation attributed to Buddha which states, "Just as a bird takes its wings with it wherever it flies, so the monk takes his robes and bowl with him wherever he goes." The fact that these two items are so prominently associated with Buddhist monks and that they are the two titles mentioned by Plutarch to refer to the devotees of Isis appears to be significant (especially when we learn that the robes of many Buddhist monks are often of linen -- see this internet reference among others available).

Below is a surviving Roman statue of a priestess of Isis with shorn head, robes, and a bronze jug or situla. 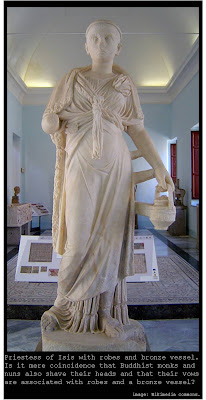 But this detail, while quite significant, is not the only evidence suggesting some ancient cultural connection between the ancient Egyptians and ancient China (and probably ancient India as well). The monastic orders of China are also well-known for the development of internal qualities in conjunction with physical activity -- most notably, the martial arts, but really with many other activities in which meditation or contemplation is accompanied by or conjoined to distinctive physical movement.

This combination is attributed in legend to the famous master Bodhidharma, who came to the Shaolin Temple in China from India in the sixth century AD and found that the monks could not meditate for protracted periods of time without falling asleep, and famously instituted a series of movements and poses to strengthen their endurance and their meditative powers. However, as John Anthony West has shown in his indispensable 1979 text Serpent in the Sky, there appears to be at least the possibility of a much more ancient Egyptian connection here as well.

On page 93 of that book, Mr. West includes a picture of an ancient Egyptian wall frieze from before 2150 BC showing men in various one-legged stances and poses. He says in his discussion, "These Old Kingdom ritual dance movements are curiously similar to those practiced today in certain groups devoted to 'inner development.'" The reader can visit the link at the beginning of this paragraph and scroll down to see the image. This does not mean that the ancient Egyptians developed actual "martial arts" as we think of them today (although it is certainly possible) but rather that they may have practiced some form of meditation with motion, which may have either influenced the development in China or (more likely perhaps) come from the same common ancient advanced civilization that imparted this knowledge to both Egypt and China.

Another clue, and one we have seen before on a world-wide scale, is the significant similarities in the metaphors selected for the celestial machinery of the heavens in both civilizations. Giorgio de Santillana and Hertha von Dechend spend much time in their master work Hamlet's Mill examining world-wide evidence that an advanced and unknown ancient civilization -- anterior to ancient Egypt -- bequeathed sophisticated astronomical understanding to later millennia in the form of myths which employ very similar imagery from one culture to another (even cultures which supposedly had no contact with one another).

There are clearly similarities in imagery which suggest cultural diffusion of some sort operating between ancient Egypt and ancient China. For example, the illustration below indicates that both cultures used bow-and-arrow symbology to refer to certain aspects of one part of the celestial realm, and de Santillana and von Dechend discuss others in their text. 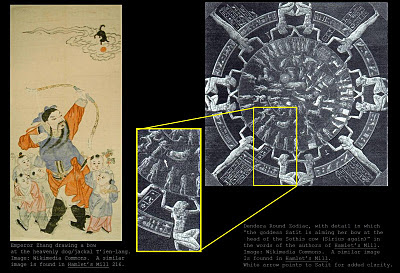 Finally, there is the very telling evidence of the precessional numbers discussed by many authors (including the authors of Hamlet's Mill) and relating to a very subtle astronomical phenomenon which conventional historians don't believe was understood by anyone until long after the mightiest era of ancient Egyptian civilization. We have seen previously that the monastic orders of China appear to have preserved these important astronomical numbers, including the number 108, which features prominently in many martial arts including Tai Chi and in the legendary trials established for monks in the Shaolin Temple as well. This evidence from the martial arts is discussed in more detail in the Mathisen Corollary book itself.

That the ancient Egyptians also preserved these same precessional numbers, including the important number 72 (clearly related to 108, which is 150% of 72) and 432 (which is four times 108). For evidence that the precessional number 432 is encoded in the Great Pyramid of Giza, see this previous post.

The fact that these prominent precessional numbers are also embedded in the martial arts so strongly associated with the monastic Buddhist tradition in China and other nearby lands suggests that the connection proposed at the beginning of this essay is not a mere fanciful speculation. It is a subject which deserves much more investigation.
Posted by David Warner Mathisen at 11:47 PM