Spiritual meaning of the dismemberment myths? 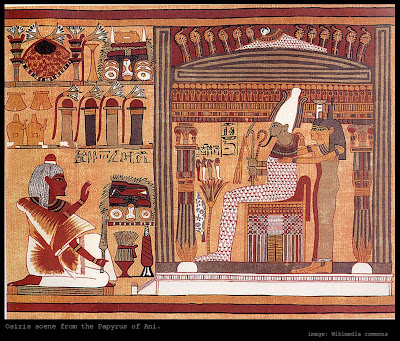 In an earlier post, we looked together at an article which took Hamlet's Mill authors de Santillana and von Dechend to task for a variety of reasons, concluding that their text is nothing more than "an amazing exhibition of academic narrow-mindedness, unrestrained speculation, and lack of expert knowledge, on the part of its authors."

At one point in the essay critical of Hamlet's Mill, the author asks, "My only comment is why didn't the channels of communication - whatever they supposedly were - also get used to carry other technical information such as metalworking."

This is a reasonable question. I gave a few possible answers, including the possibility that some knowledge was perceived as dangerous to let out to everyone, while other knowledge (such as metalworking) was not perceived the same way. I also pointed to some less obvious possibilities, discussed in a previous blog post entitled "If the ancients really knew so much, why didn't they just come out and say it?" In that post, I reference some very good arguments offered by both Robert Temple and by John Anthony West.

There is an additional possible answer to that question.

I believe the "chopping down the world-tree / Djed column" motif that so often accompanies precessional imagery in ancient myth is likely connected to the "Big Roll" experienced by earth as a result of the events surrounding the global flood described by the hydroplate theory.

I have argued (along with de Santillana and von Dechend) that the myths found around the world encode scientific understanding of the planets, the stars, and the phenomenon of precession (see blog posts here and here for example).

However, it is also very possible that -- in addition to encapsulating scientific truths about precession etc -- these recurring myths also embody deeply-held spiritual beliefs. This would be yet another answer to the critic's question above regarding the reason that the ancients preserved this knowledge in myth, rather than (say) "technical information such as metalworking."

Authors Timothy Freke and Peter Gandy have provided some evidence for ancient spiritual interpretation of the precession-embodying myths of Osiris and Dionysus. In their 1999 text The Jesus Mysteries, they write:

The Pagan sages taught that in the Inner Mysteries an initiate discovered that what appeared to be their individual Daemon was actually the Universal Daemon, which they pictured as having been torn into fragments and distributed among all conscious beings. Epictetus teaches: "You are a fragment torn from God. You have a portion of him within you." Osiris-Dionysus represents this Universal Daemon, the Mind of God conscious in all living things.

In many myths Osiris-Dionysus meets his death by dismemberment. This is often taken to mean the threshing of the grain to produce bread and the trampling of grapes to produce wine [note: de Santillana and von Dechend provide extensive argument to support the grinding between millstones, for example, as precessional allegory in myth]. Initiates of the Inner Mysteries, however, understood this motif on a more mystical level, as encoding teaching about the dismemberment of the Universal Daemon by the power of evil. In the myth of Osiris, for example, the godman is murdered and dismembered by his evil brother Set, and then the goddess Isis collects together all of Osiris' limbs and reconstitutes him. 125.

Strictly speaking, Isis did not manage to collect all of his limbs, but Freke and Gandy's point is well taken. There is a clear resonance with a profound spiritual teaching connected to the scientific and astronomical mechanism of precession (the authors Freke and Gandy do not assert that precession was known more anciently than the time of Hipparchus -- I argue that it was, along with many others including de Santillana and von Dechend, but do not wish to imply that Freke and Gandy share this belief).

This connection of the scientific and the spiritual appears to me to be very important. These two hemispheres of human experience have been largely put asunder in the modern world.

We have encountered the importance of concept of dismemberment and reconstitution of the individual before -- see for example this previous post.
Posted by David Warner Mathisen at 11:35 PM