Altered States: acoustics in the ancient megalithic temples of the Old and New Worlds 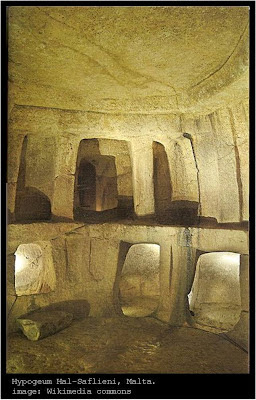 Here is a link to an amazing article published this past Monday in the March 2012 edition of Popular Archaeology and entitled "Ancient Builders Created Monumental Structures that Altered Sound and Mind, Say Researchers."

The article focuses on the work of Linda Eneix at the Hypogeum Hal-Saflieni in Malta (on the island of Gozo -- see diagram in this previous post), one of the most incredible and unique ancient monumental structures on earth, where about 2,000 tons of rock were removed to create a labyrinth of curving chambers, stairways, trilithons, and columns. The site may date to as early as 4000 BC according to some estimates, while others place the Malta structures as belonging to a period from 3800 BC to 2400 BC; in any event the megalithic structures on Malta are often alleged to be among the oldest in the world.

According to Linda Eneix and her fellow-researchers, the Hypogeum contains sophisticated acoustics that consistently produce vibrations in the frequency range of about 110 Hz, which apparently causes abrupt and measurable changes in brain activity that scientists at the site have documented in volunteer subjects.

The same article discusses previous work suggesting similar findings at other ancient megalithic sites around the globe, including the ceremonial center at Chavín de Huántar in Peru, as well as at Newgrange in Ireland.

More discussion by Linda Eneix of these acoustics can be found here, part of the Old Temples Study Foundation website.

The level of sophistication in acoustic incorporation into quite challenging architectural design indicates that these extremely ancient structures were not the product of very primitive humans who were just beginning to emerge from the hunter-gatherer phase. Yet this obvious fact is quite damaging to the conventional narrative of mankind's ancient past.

In fact, it is quite apparent from the archaeoacoustic analysis described in the above essays and articles that ancient humans probably understood more about the importance and impact of sound vibrations than we do today! Such a startling assertion resonates with the themes discussed by John Anthony West in his classic 1979 text, Serpent in the Sky, as well as the elaboration on this subject found in previous blog posts such as:

It also brings to mind a quotation in this previous post, in which I wrote: "In a sense, we might say that the measurements of a building or a garden can act on us in much the same way that music can act on us: architecture is 'physical music.'"

Another important implication of this nascent study of the archaeoacoustics of ancient megalithic spaces (besides the fact that these acoustic effects clearly reveal an advanced and sophisticated level of scientific and human-biological awareness) is the evidence that very similar acoustic effects appear to have been incorporated in megalithic sites on continents separated by mighty oceans, implying that the ancient civilizations that built them either had direct contact with one another or that they were descended from a common ancestor civilization (or perhaps from ancestor civilizations that had contact with one another).

This second conclusion should not be very hard to believe: it should not be too farfetched to imagine that a culture demonstrating the levels of scientific sophistication required to create the acoustics of the Hypogeum of Malta might also be able to navigate by the stars and build ships that could cross the bluewater oceans. Extensive evidence of other sorts points to the fact that ancient trans-oceanic contact took place long before conventional historians say that it did.

Further, the temples on Malta contain precise astronomical and solar alignments. The Hypogeum appears to contain some solstice alignments, and we have already seen in previous posts that the Mnajdra temple contains a precise equinoctial orientation. The incorporation of such alignments reinforces the suggestion that the same civilization that constructed these megalithic structures might also have had the ability to cross the oceans.

Below is an excellent video discussing and demonstrating the equinoctial alignments at Mnajdra:

Previously, this blog post discussing these alignments pointed out that the fact that the precise east-west orientation of the central corridor of this very ancient temple has been preserved for more than 5,000 years is a devastating piece of evidence that calls into question the foundations of the tectonic theory of earth's geology.

Thus, the temples on Malta prove to be extremely important in preserving evidence that refutes the most basic assumptions undergirding conventional geology as well as those undergirding the conventional views about the ancient history of the human race.

Finally, the suggestions about the importance of sound and vibration and the possibilities that these vibrations -- even if generated by the human voice -- have powerful and beneficial impacts on us human beings is a line of study which ties right in to the subjects discussed in this previous post, and in this previous post.

The possibility that certain voice-activated vibrational frequencies can alter brain activity is fascinating; it is also fascinating to learn that some archaeologists have found traces of ergot in one of the chambers of the Hypogeum (called "The Cistern" -- see this map). The fact that ergot is a fungus with powerful mind-altering effects (LSD is in fact derived from it) points back to topics discussed in this previous post on mushrooms (also used to produce altered states by cultures on continents separated by the largest oceans).

Clearly, the work being done by Linda Eneix, Miriam Kolar, and others who are researching the acoustic qualities of Hal-Saflieni, Chavín de Huántar, and other sites around the world, is beginning to shed light on a subject of incredible importance to humanity. We should all be grateful to them, and look forward to hearing more about these ancient soundwaves (and the impact they have on the mind) in the near future.