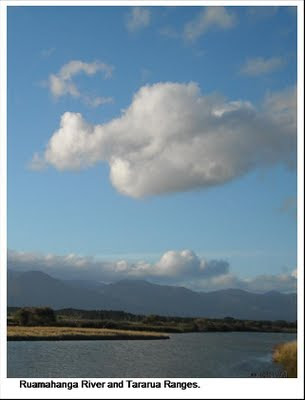 In July, 1999, in the final chapter of his book Ancient Celtic New Zealand, Martin Doutré (after presenting extensive archaeological evidence to support his assertions), wrote:

The most likely era when the first / bulk of the Egyptian / Mediterranean or related british Megalithic people came to New Zealand would be around 3000 BC - 2500 BC. It is my belief that continuous migrations followed beyond that era.
[. . .]
Apart from the core population of pre-Celtic people, several other groups found their way to New Zealand as well. One such group was the "red haired" people who, according to Alaskan Indian (Haida) tradition, came by way of the Bering Strait, down the coast of North America and out into the Pacific. Ancient African, Egyptian, Libyan and Meso-American peoples seem to have set up residence in New Zealand also, from a very early epoch. There is evidence to support the tradition of a Tibetan group finding their way to the Northern Hokianga region and setting up a sizable population there.
[. . .]
With developed maritime activity and two-way trading between Hemispheres for thousands of years, European and Mediterranean peoples have direct lineages extending to ancient New Zealanders. Skeletal remains, reposing in caves or buried in New Zealand, must be the direct forebears of some present-day Europeans and, in a general sense, the extended family and offshoot branches of the greater European family tree.
[. . .]
By British colonial times [. . .] There were still non-amalgamated pockets of the more ancient pre-Celtic / Celtic people living in isolation, but their continued existence was always tenuous and predicament dangerous. It had been a harrowing, tiresome and anxious few centuries of daily grasping at life, leading up to the beginning of the nineteenth century. 280-284

Over five years after the above passages were published, in October 2004, a young local of New Zealand's rural Wairarapa Valley was walking along the banks of the Ruamahanga River with his two dogs. As an article by Vaughan Yarwood in New Zealand Geographic number 96 (March - April 2009) describes it:

Stepping out onto a broad shoulder of river sand, studded with stone chip, he noticed what he took to be the upper surface of a whitish rock lit by the noonday sun. Getting closer he saw that it was bone. Such a thing was not uncommon hereabouts—he had often come across fragments, and even complete skulls, of cows and sheep. But as he scraped aside the stones and prised the object free, he realised with a shock that he held in his hands a human skull, discoloured with age, and bleached above and behind the right eye socket where it had lain exposed. There were several holes, one of them in the right temple, perhaps suggesting a violent death.

When the skull was turned over to the authorities, it was determined to be that of a European woman, aged 40 to 45 years. The shock came later, when the skull was submitted to radiocarbon dating, and determined to have belonged to someone who died around the year 1654, plus or minus 35 years (bracketing the year of death between 1619 - 1689, inclusive).

The difficulty this date poses for conventional history is the fact that no European woman was known to have been anywhere in or on New Zealand during that time period. Dutch explorer Abel Tasman (1603 - 1659) had sailed to New Zealand in 1642, but had not been able to land due to the violent reception his men received from the Maori warriors, who sailed out in war canoes (wakas) and killed four of his men when he first attempted to land. He also had no women on board.

No further European vessel is known to have made any contact whatsoever with New Zealand after Tasman's abortive 1642 visit for over 100 years, until the first voyage of James Cook, who sailed to New Zealand from Tahiti in 1769.

While conventional history has a major problem in explaining the skull of the Ruamahanga Woman (as she is sometimes called), the above alternative history proposed by Martin Doutré and backed up by completely different archaeological evidence (since he proposed it before the skull of Ruamahanga Woman was even discovered) has no difficulty explaining the presence of a European woman in the remote mountains upstream of the Ruamahanga in the 1600s.

In fact, the skull is exactly the kind of evidence one would expect to discover if Mr. Doutré's theory is correct. He believes that the remnants of the previous inhabitants of New Zealand were forced into hiding in remote mountain locations some time after the arrival of the Maoris in around AD 1300 (perhaps after some centuries of peaceful coexistence).

He even describes "unsubstantiated testimony" of a massacre of "captured groups" containing women and children who "were herded together and then summarily executed by a blow to the right side of the head" (283). Again, Mr. Doutré wrote those words in 1999, years before the discovery of a European female skull described as having a hole "in the right temple, perhaps suggesting a violent death."

As discussed in the Mathisen Corollary, the case of the Ruamahanga skull has been dismissed by conventional academics using a completely speculative story with no basis in evidence whatsoever.

In all fairness, even though it is a very powerful piece of evidence that something is amiss with the conventional narrative of mankind's ancient past, if it were the only piece of anomalous evidence, it might be appropriate to dismiss it. However, it is only one of hundreds, perhaps thousands of clues which together strongly support an alternative theory.

All mankind deserves to know about these things and to be allowed to draw conclusions for themselves. Unfortunately, few outside of New Zealand have probably even heard of the Ruamahanga Woman.
Posted by David Warner Mathisen at 8:06 PM