The undying stars: what does it mean? 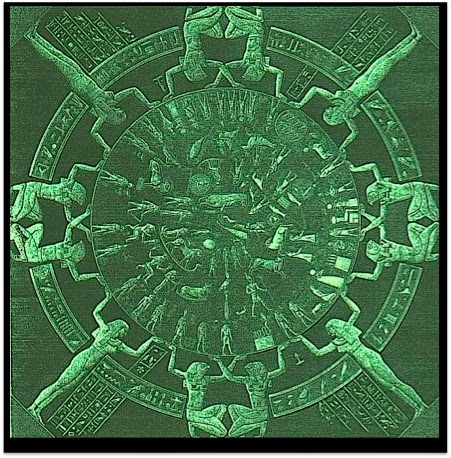 Once it can be demonstrated beyond a reasonable doubt that the ancient scriptures and sacred traditions around the world consist of celestial allegory, with each story describing the motions of the sun, moon, stars or planets, the next question which naturally arises is: Why?  Why would the cultures of the world ascribe such importance to the circling heavens, so much so that they encoded those motions at the very heart of their most sacred art, literature, and cultural rituals?  (For some discussions of the evidence supporting the conclusion that the ancient sacred traditions are all founded upon celestial allegory, see previous posts such as this one, this one, and this one, as well as much more evidence discussed in The Undying Stars, the first three chapters of which can be read online here).

One possibility, much in vogue since the nineteenth century, would be that primitive humans were so over-awed by the glory of the heavens that they worshiped the sun and moon and stars and planets as deities, and that the sacred traditions and ancient scriptures of the world are simply the more-civilized versions of those early religious impulses from the days of the hominids.  This theory argues that, beneath the accretions added by later civilizations, one can still detect the outlines of the earliest and most primitive sun-and-star worship, and this fact (in their view) reinforces the storyline of mankind's long and generally linear progress from "early humans" to "primitive hunter-gatherers" to "pastoral herdsmen" to "neolithic farmers" and ultimately to the building of the first true civilizations (and further progress from there).

This explanation, however, either overlooks or deliberately obscures the evidence for the existence of a very sophisticated ancient civilization (or civilizations), with capabilities we still do not fully understand -- capabilities such as the construction of megalithic structures using huge stones, quarried from great distances, set at precise angles, and aligned with great precision to subtle astronomical phenomena.  The combination of these subtle alignments and the massive stones transported from great distances implies that the designers of these sites knew exactly what size stones they needed to obtain before they quarried them.  Further, these sites often incorporate dimensional measurements and ratios indicating that their designers understood the subtle celestial mechanics of precession, and even the size and shape of planet earth!  The existence of such monuments, many of them from great antiquity (predating the earliest known civilizations) tends to upend the conventional storyline (briefly outlined in the previous paragraph) of mankind's progression from primitive humans subsisting as hunter-gatherers and pastoral herdsmen prior to the earliest civilizations.

Further, these incredible ancient monuments (whose construction is still in many cases unexplainable by conventional academics and either un-duplicate-able or extremely difficult to duplicate using today's technologies) are not simply amazing on their own: their relationship to one another forms what can only be described as a "world-wide grid" which indicates that their designers were far more advanced than the conventional timeline can possibly account for.

The profundity of the wisdom preserved in the ancient scriptures and traditions of mankind likewise argues against the theory that they are simply the glorified remnants of the awestruck deification of the sun, moon, stars and planets by "primitive humans."  Of these manifestations of ancient wisdom, already evident in some of the earliest writings known to history (such as the Pyramid Texts), Alvin Boyd Kuhn declares: "They were the products, not of early man's groping tentatives to understand life, but of evolved men's sagacious knowledge and matured experience.  On no other ground can their perennial durability and universal power be accounted for" (Lost Light, 30).

To conclude that just because the ancient myths and sacred traditions (including the scriptures of the Old and New Testaments) are full of allegorical descriptions of the motions of the circling heavens they must ultimately be about the circling heavens themselves is to commit a colossal error.  Many traditions of Buddhism contain the metaphor of the "finger pointing to the moon" and advise the listener not to concentrate on the finger or risk missing the heavenly glory of the moon to which the finger is pointing; however, it would be a ridiculous mistake to use this fact to conclude that Buddhism is all about the rocky sphere which orbits our planet!

Likewise, just because it can be conclusively demonstrated that the scriptures of the Old and New Testament describe celestial metaphors, this by no means necessitates the conclusion that those scriptures are all about the heavenly bodies.  In fact, just like the moon in the Buddhist saying about the finger and the moon, the motions of the starry heavens are themselves a metaphor for higher truths regarding the human condition and the nature of existence in this material realm.

One aspect of this metaphor, discussed in some detail in this previous post, entitled "A Hymn to the Setting Sun, and the ultimate mystery of life," teaches that each human soul is immaterial and undying, incarnating in successive material bodies and then successively returning to the spirit realm.  That post explained:

One of the metaphors which the ancients used in order to convey this vision of human existence as a cycle of incarnation in matter followed by re-ascent into the spiritual realm was the cycle of the heavenly bodies, including that of the sun, which plunges nightly beneath the horizon (matter) only to rise again each morning clothed in fire into the upper realm of the heavens.

This same illustration of the successive incarnation and re-ascent is also provided by the motion of the individual stars, which plunge into the western horizon to become "enfleshed" in earth and water (the lower elements), only to appear again on the eastern horizon to rise again into the heavens -- the realm of fire and air (the higher elements).  In doing so, they perfectly allegorize the incarnation of the soul in a body of earth and water (often described as a body of "clay" in the ancient scriptures) and its subsequent re-ascent into the freedom of air and fire, followed by another descent into matter.

This (apparent) daily turning of the stars across the (apparent) crystal dome is depicted below, showing the course of the stars for an observer located at about 30 degrees north latitude: 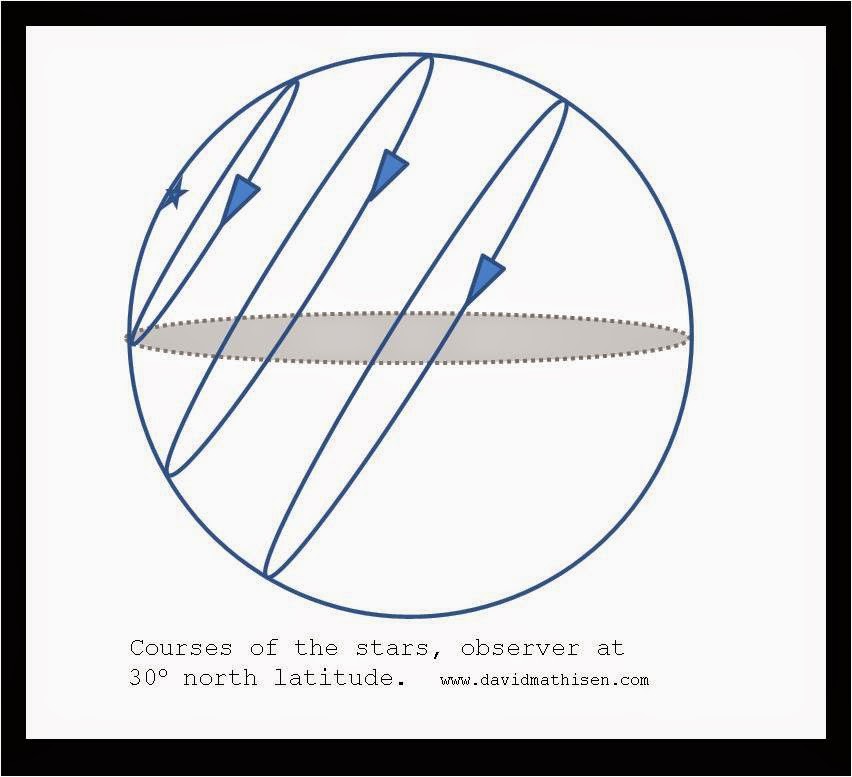 (This diagram has been published in an earlier blog post from August of 2011, entitled "Listening to the greatest navigators our globe has ever seen").  In the diagram, because the observer is located at about 30 degrees north latitude, the pole star about which the heavens appear to turn is located at about 30 degrees elevation above the horizon (the horizon in the above diagram is depicted as the dotted line around the edges of a flat grey disc, out of which the heavenly bodies such as the sun, moon, planets and stars will appear to rise in the east and into which the same heavenly bodies will appear to sink in the west).

Please note that stars which are close enough to the pole star will never actually sink below the horizon (although they will be blotted out by the brilliance of the sun each day when the day-star is above the horizon itself).  Those stars which are closer to the pole star in the above diagram (that is, any star located between the smallest circle in the diagram and the pole star itself) will not plunge below the horizon.  These stars the ancients (particularly the ancient Egyptians) called the "imperishable stars," or the "undying stars."  For an observer at 30 degrees north latitude, these would be the stars which are within about thirty degrees of arc from the north celestial pole.

The diagram below from an old US Air Force manual depicts the stars near the north celestial pole in the modern epoch, with the north celestial pole marked by a small cross and the letters "NCP" in the center of the wheel.  Very close to the true north celestial pole is the star Polaris, at the end of the handle of the Little Dipper (Ursa Minor).  Pointing to the pole star Polaris are the "pointers" in the bowl of the Big Dipper (an arrow is drawn from the two "pointers" towards Polaris, to help illustrate the concept).  Very helpful rings are drawn on the chart, each ten degrees greater from the central point of the north celestial pole (NCP).  These are marked with degrees of elevation above the celestial equator: the NCP is at 90 degrees, the first circle from the NCP is marked as 80 degrees, the next circle is marked as 70 degrees, and so on.  For an observer at 30 degrees north latitude, all the stars within the first three circles would be considered "the undying stars," and would never dip below the horizon (of course, mountains and trees along the horizon would cause some stars on the edges of the outer circle to dip below the horizon at times). 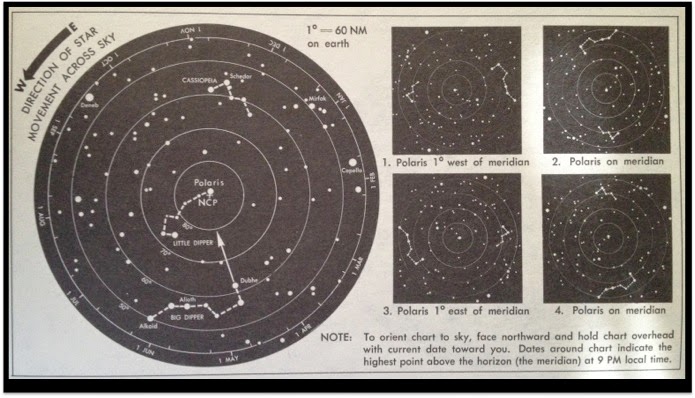 In his 1940 book Lost Light (which can be read online using links found in this previous post), Alvin Boyd Kuhn explains that one interpretation of the metaphor of the imperishable or undying stars in ancient mythology would be spirits which never have descended into mortal incarnation, but another would be spirits who have, through successive incarnations, surpassed the cycle of reincarnation.  He writes:

Among the ancients the stars that dipped beneath the horizon were emblematic of souls in physical incarnation, in contradistinction to those that never set [. . .] The redeemed souls rejoiced in the Egyptian Ritual (Ch. 44) at being lifted up "among the stars that never set."  115.

Later in the same text, Alvin Boyd Kuhn explains that in ancient Egypt,

The souls having attained the resurrected state in shining raiment were called the Khus or the glorified. [. . .] the Egyptian Khemi, or Akhemu, the dwellers in the northern heaven, as never-setting stars or spirits of the glorified, the Khus or Khuti.  587.

This is not to say, as textbooks often authoritatively declare to schoolchildren, that the ancient Egyptians literally believed that they would go dwell in the physical starry heavens at some point, or that when they said "the dwellers in the northern heaven" they believed that this was the physical location of the spirits of those who had surpassed the cycle of incarnation.  Such an assertion falls into the trap of literalism: of believing that the texts must be read literally and that the authors of those texts intended for them to be read only this way.

These teachings were using metaphor and esotericism to teach profound truths regarding the nature of human existence -- not literal directions to the location of disincarnate souls.

As The Undying Stars discusses further, these celestial metaphors may also have been preserving and conveying a sophisticated understanding of the nature of our physical universe, one which anticipates modern quantum physics by many thousands of years and which teaches (as does modern quantum physics) that human consciousness actually impacts and in some way causes to manifest the apparently physical world we inhabit in this incarnation.

Ultimately, these ancient scriptures can also be said to teach that all stars are really "undying stars" or "imperishable stars," in that they do not cease to exist, even after many successive cycles of incarnation, and in that they represent undying souls who will one day overcome the cycle of incarnation and join the Akhemu, "the dwellers in the northern heaven, as never-setting stars or spirits of the glorified."