Welcome to new visitors from The Higherside Chats!


Welcome to new visitors (and returning friends) from THC!

I recently had the opportunity to appear as a guest on Greg Carlwood's The Higherside Chats, and it was a real pleasure to hang out with Greg and be on a show that I've come to really enjoy since first learning about it at the Secret Space Program in San Mateo this past June.

I really appreciate Greg's style and the knowledge and preparation he brings to each interview. Greg's funny, he's positive, and he seems like someone who'd be fun to hang around with or go surfing with in San Diego. Plus he's created a great platform for allowing different viewpoints to be aired out and different perspectives offered on important subjects that affect everyone in this critical point in human history. And he's a professional, and one who has shown himself to be a perceptive judge of what's being offered in a genuine manner and what might be "less than completely genuine."


I also really appreciate the fact that Greg created a show called The Higherside Chats, because he is deliberately creating a counter to the "Fireside Chats" of history, which marked the first time that a US president used the "new technology" of radio to "create reality" and craft a narrative to serve as a lens through which the world would view events in the way that the government wanted the people to view those events.

Although those original "Fireside Chats" are no more, the governments of the world certainly continue to use various forms of the media and the platforms offered by today's "new technology" to try to "create reality" and shape the narrative: The Higherside Chats is an example of the people using that same "new technology" to question the narratives that are being offered, to examine other possible explanations for what they see going on in the world around them, and in fact to "challenge the reality" that is being created and even to create a new reality for the future!

It's interesting that even before I met Greg in late June or knew about the existence of The Higherside Chats, I created two short videos about "narratives," and used the old "Fireside Chats" as an example of the way narratives are created, handed out, and turned into "reality" by the engines of "reality creation" (you can view those two short videos here, embedded and linked in a blog post called "The importance of challenging false narratives").

Hope everyone enjoys the interview! Feel free to get in touch with me via Twitter or Facebook, and hope you'll come back to visit this blog soon. 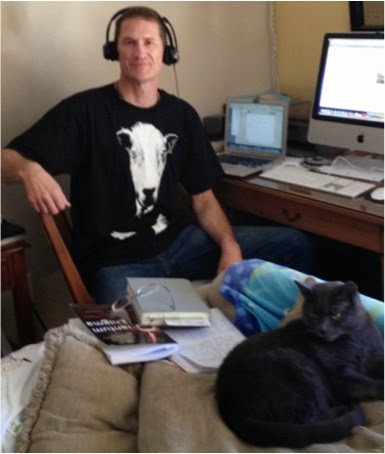 above: trying to let my brain unwind after the interview.
Posted by David Warner Mathisen at 3:34 AM