Have you heard of this artifact? The Grave Creek Stone 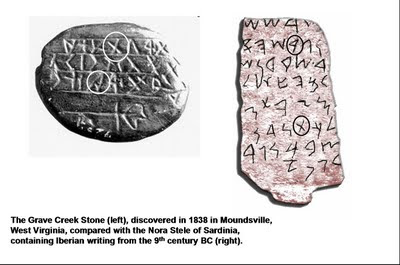 How many Americans are aware of the existence of the Grave Creek Stone (shown above, left), discovered in 1838 in Moundsville, West Virginia?

It is one of literally hundreds of artifacts found in North and South America containing very clear examples of Old World writing, including forms of Iberian, Phoenician, Ogham, Libyan, and even Hieratic Egyptian. Above, the writing on the Grave Creek Stone is compared to an example of ancient Phoenician Iberian writing on the Nora Stele found in Sardinia and dated to the ninth century BC.

While those who refuse to countenance the possibility of contact between known ancient civilizations and the Americas can declare each of these isolated artifacts as hoaxes or frauds, the weight of the evidence of all of them taken together is more difficult to ignore.

Further arguments for believing that at least some of these New World artifacts are not fraudulent are presented in the Mathisen Corollary, including the presence of writing in alphabets that had not even been deciphered when the artifacts were discovered but which can now be translated, as well as connections with patterns from ancient mythology which were not explored in detail until decades after some of the artifacts were discovered.

Posted by David Warner Mathisen at 8:17 AM