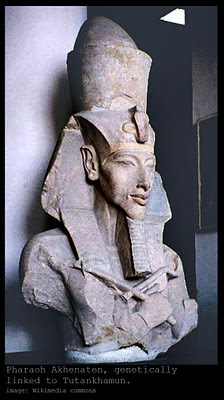 In the previous post, we pointed out that the discovery of the tomb of Tutankhamun was significant for many reasons, especially for the largely intact nature of the tomb. Although it had apparently been robbed twice in antiquity (probably within a few months of Tutankhamun's burial), the tomb's entrance was later covered by huts built to house the workers building the tomb of Rameses VI almost two centuries later and forgotten.

The ancient robbers were apparently unable to penetrate the nested oak shrines housing the sarcophagi of the king, or else did not have time or the inclination to do so, and thus Tutankhamun remains the only pharaoh whose mummy was found in modern times where it was originally laid to rest by the ancients.

As a consequence, his tomb provides a remarkable window into ancient Egypt. Some of the clues that are preserved in Tut's tomb may turn out to be extremely important to arguments that mankind's ancient past differs from what is taught today in conventional history books.

For example, the magnificent golden funerary mask that was found over the head of the mummy itself -- by far the most famous artifact from the tomb of Tutankhamun, and one that might not have survived had the tomb not been lost to history for over 3,000 years -- appears to contain symbolism linking it to the mokos or facial tattoos of the Maori of New Zealand, according to the analysis of Martin Doutré (discussed in this previous post).

If Mr. Doutré's analysis is correct -- and I believe it is very convincing -- then there must have been some ancient contact across the oceans at dates far earlier than conventional history allows. It could be that the Egyptians themselves traversed the oceans (there is other evidence that may support this theory, such as possible Egyptian religious elements in the Maori haka, discussed in this post, as well as other epigraphical evidence that has been found in places such as North America), or that other cultures did so and then traded with the Egyptians (such as the Phoenicians, famous in antiquity for their maritime abilities, or the Anatolians and the Libyans, who also may have been accomplished seafarers), or that cultures directly descended from or heavily influenced by the Egyptians did so.

Recently, new evidence from Tutankhamun's tomb has emerged which -- if true -- could shed some more light on this fascinating topic (and further undermine the conventional history books). Genetic testing has been done on the mummy of Tutankhamun in order to gain greater clarity on his patrimony. Egyptologists have long suspected that Tutankhamun may have been the son of the famous pharaoh Akhenaten, who established the worship of the Aten instead of the traditional worship of Amon-Ra and the other deities during his reign (Tutankhamun appears to have been called Tutankhaten before changing his name -- some artifacts in the tomb bear evidence of the change, and others appear to have been missed altogether and still read Tutankhaten).

Now, through genetic testing, scientists can examine Y-chromosomal evidence that provides confirmation of shared paternal lineage. As this series of videos from the Discovery channel indicate, the tests establish a clear match between Tutankhamun, Akhenaten, and Amenhotep III. It is well-established that Amenhotep III was Akhenaten's father (Akhenaten's name was Amenhotep IV before he changed it). The new tests appear to confirm that Tutankhamun was either Akhenaten's son or his younger brother (Amenhotep can either be Tutankhamun's father or grandfather).

Following on this Discovery series, Swiss genetic research company iGENEA recently announced that they had determined the haplotype of Tutankhamun's Y-chromosome DNA and that "Tutankhamun belongs to the haplogroup R1b1a2, which more than 50% of all men in Western Europe belong to." Here is a related story from Reuters about the announcement.

There have been some significant arguments against iGENEA's conclusion, including the allegation that iGENEA has made sensational announcements before, possibly in order to increase sales of their genetic tests (as you can see from the link above, the Tutankhamun announcement came with a request that men have their DNA tested by iGENEA and if they match the DNA of the mummy, they will get a refund of the testing costs, which run from €129 to €399).

Other critics have been quick to throw down the race card, stating that the only people interested in Tutankhamun's haplotype are probably either "Nordicists" or "Afrocentrists." While it is of course true that there are those who try to elevate their "race" over others (race being a Darwinian fiction to begin with, as we have discussed previously), and while it is true that white racists and black racists may both be found trying to claim the accomplishments of ancient Egypt as proof of some form of racial superiority or identity, it does not follow that any DNA match between Tutankhamun's haplotype and that of western Europeans is the product of racist bias or propaganda.

A more basic criticism of iGENEA's claim is that they didn't have access to the DNA at all before they made their analysis. Although the DNA test which matched Tutankhamun to Akhenaten and Amenhotep III was done with the actual tissue of the mummy, iGENEA admits that they reconstructed the haplotype by watching the Discovery channel episode, where a computer screen shows the data that they needed to do their analysis -- the DNA itself has "been locked away" and is not available to other researchers.

One of the geneticists who was part of the team that did the original work on the DNA, Carsten Pusch, has denounced iGENEA's conclusion, as seen in this article from Live Science. That article admits that "Pusch and his colleagues published part of their results, though not the Y-chromosome DNA, in the Journal of the American Medical Association (JAMA) in 2010."

The unanswered question not raised in that article (nor the others denouncing iGENEA) is the question of why the full Y-chromosome DNA results were not published and are apparently being kept secret? If iGENEA is wrong about what they deduce from the computer screen shown in the Discovery channel documentary, then what has anyone got to hide? Why not get the results out in the open?

Whether or not Tutankhamun's DNA actually shows commonality with the haplotype in question is not really conclusive one way or the other. If iGENEA's claims are correct, then this commonality of haplotype in one ancient Egyptian family of pharaohs is only one piece of evidence, and a solid case needs more evidence than a single clue. However, it may turn out to be an important clue.

Furthermore, there is other evidence in addition to this rather recent development which points to a very different timeline of ancient history -- and a complete reassessment of the scientific capabilities of the ancients -- as many other "alternative" authors and historians have alleged, as we have discussed numerous times in previous posts, and as discussed in greater depth in the Mathisen Corollary book.

It may be that Tutankhamun's family tree -- already quite interesting -- is more extensive than anyone suspected.

Posted by David Warner Mathisen at 12:28 AM