Copernicus, Proclus, and the lost knowledge of the ancients 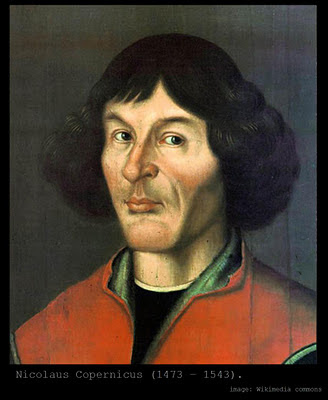 Yesterday, NPR aired a review of Dava Sobel's latest book, A More Perfect Heaven: How Copernicus Revolutionized the Cosmos, on the life and work of Copernicus, and the dynamics of his own struggle over his discovery that the earth revolves around the sun rather than the other way around.

The book itself, by an author who is clearly fascinated by the motions of the spheres and the turning of the earth, and who has written several acclaimed books about the interaction of human culture with these concepts including The Planets, Longitude, and Galileo's Daughter (and who has further authored books about taking control of your health, a subject which is also close to our heart here at the Mathisen Corollary blog, as evidenced by previous posts such as this one), does acknowledge that the idea that the earth goes around the sun had been put forward before, by Aristarchus of Samos (310 BC -c.230 BC) over a thousand years earlier.

Ms Sobel explains that "Copernicus had no idea that Aristarchus of Samos had proposed much the same thing in the third century BC" -- and for all intents and purposes, it made no difference to the society in which Copernicus lived or in the human drama of his struggle in releasing his theory, or in the revolution that it eventually caused, because it is true that when Copernicus lived, virtually everybody believed that the heavens revolved around a stationary earth. It takes nothing away from his achievement to realize that mankind may have known the truth many centuries earlier and thrown that knowledge away.

The NPR examination of Ms Sobel's new book (which can be heard online here) doesn't even mention the fact that a heliocentric theory had been published in ancient times, implying that Copernicus was the first to ever come up with the idea (it also compares the current debate over global warming to the Copernican debate, implying that anyone who disagrees with "the scientific community" is akin to those who would deny that the earth goes around the sun).

But the fact that ancient authors discussed the possibility that the earth and the other planets go around the sun is not a trivial one, and should not be lightly glossed over (even though it is correctly outside the scope of Ms Sobel's examination of the personal struggle Copernicus himself faced in the early 1500s). In fact, there is substantial evidence that Aristarchus was not the first to suspect that the earth orbited the sun -- many readers will be surprised to learn that ancient authors attested that Plato (424 BC - 238 BC) may well have believed the same thing, and he was born over a hundred years before the birth of Aristarchus.

In the first appendix to his book The Sirius Mystery, which we have discussed at some length in these previous posts (here, here, and here), Robert Temple explains that Plato's Timaeus appears to hint at the possibility that the earth turns around its axis and that the planets have axes and orbits as well. He points out that the evidence suggests that Plato was not really a well-versed astronomer, and that it appears quite likely that Plato "inserted someone else's treatise into his dialogue without being completely au fait with the material." However, he notes that several ancient sources attest that late in his life, Plato changed his earlier opinion regarding the earth being at the center of the universe (among these ancient sources is Theophrastus, who lived from 371 BC to 287 BC and was the successor to Aristotle, who was the successor to Plato, and another source later on was Plutarch himself, who disagreed with Plato's conclusion).

Mr. Temple also presents compelling evidence that a much later Platonic philosopher and careful student of Plato's works, Proclus Lycaeus(AD 412 - AD 485) concluded from his careful reading of the Timaeus (and his study of other works) that the earth rotated on an axis, that the planets had orbits of their own (rather than moving as part of transparent crystal spheres), that epicycles were a clever idea but incorrect (disagreeing with the work of the earlier Plutarch, whose theories would continue to hold sway all the way up until the days of Copernicus, Galileo and Kepler), and of the possibility that the earth orbits the sun (Proclus asserted that Heracleides Ponticus, who lived from 390 BC to 310 BC had asserted such a theory, although scholars today do not agree with Proclus that Heracleides actually did so).

Mr. Temple also notes that Johannes Kepler (1571 - 1630) held Proclus in very high esteem, and wrote of the impact his work had upon him, saying:

I have recently fallen upon the hymn of Proclus the Platonic philosopher, of whom there has been much mention in the preceding books, which was composed to the Sun and filled full with venerable mysteries in the context of speculation about 'what did the ancient Pythagoreans in Aristotle mean, who used to call the centre of the world (which they referred to as the "fire" but understood by that the sun).

In fact, all of these references seem to hint that the knowledge which the early Greek philosophers and astronomers were groping for came from a far more ancient source -- Kepler mentions "the ancient Pythagoreans" and it is an ancient tradition that Pythagoras (c. 570 BC - 495 BC) traveled to Egypt and learned from the priests of Heliopolis.

The Mathisen Corollary book explores extensive evidence that the most ancient civilizations we know -- the ancient Egyptians, Sumerians, and Babylonians -- had an understanding of the almost imperceptible phenomenon of precession, and even that they understood it to be related to the "bending," the "chopping down," or the "uprooting" of the celestial axis (which implies some understanding of the rotation of the earth).

Even further, it appears quite likely that some of the earliest ancient monuments, including both Stonehenge and the Great Pyramid, function as precise scale models of a spherical earth, with diameters and perimeters relating to the circumference of the circular equator to within 1% when multiplied by the important precessional number 432.

Further, Charles Hapgood (and later authors following his work) demonstrated that the portolan maps such as the Piri Re'is map are almost certainly based on much more ancient knowledge of the globe, from an ancient civilization that knew much more about it than was typical even in the golden age of Greece and Plato. In his book Maps of the Ancient Sea Kings: Evidence of Advanced Civilization in the Ice Age, Mr. Hapgood explains that the circular or polar radii typical of the portolan maps were apparently based on plane geometry, causing the "parallel meridians to deviate further and further from True North the farther they were removed from the center of the map," but that "the portolan design could compensate for this" by the conscious use of "different Norths" in different parts of the map (designating one radial line as a north-south meridian in the center portion of a map, and selecting a different radial line as a north-south meridian for regions nearer the periphery of the map, with the coastlines bent around appropriately to conform to the new north-south orientation -- see footnote on page 17).

The use of such a system, in addition to the accuracy of the New World coastlines depicted in some of the portolans, and the depiction of Antarctica in more than one of the portolans, points to the possibility that they are based upon the knowledge of an ancient civilization or civilizations capable of sailing around the globe and aware of its size and shape.

If very ancient civilizations long before the time of Plato and Aristarchus knew that the earth was a globe (and crossed its oceans consciously and regularly), then it is certainly possible that they were aware that the earth went around the sun (since it is almost positive that they knew about the subtle phenomenon of precession).

All of this is important for many reasons, not least of which is the importance of shattering the smug confidence in mankind's steady and nigh inevitable upward progress which permeates NPR's discussion of the Copernican revolution. If such levels of science and learning have been erased before in human history, we should be aware of the possibility that such a catastrophe could happen again.

There are literally piles of evidence from around the world suggesting that the earliest civilizations we know of (and indeed, perhaps a lost predecessor to the earliest civilizations known to history today) were the most advanced, and that their science and knowledge were lost and almost forgotten for millennia, passed along only in secret by select groups of initiates (of whom Plato's unknown source was no doubt a member). The knowledge that the earth travels around the sun, which Copernicus and the other Renaissance astronomers would rediscover so many years later, is just another data point suggesting that almost everything we have been taught about mankind's most ancient history is wrong.

Posted by David Warner Mathisen at 7:35 AM