Orion and the Winter Circle of mythologically important stars 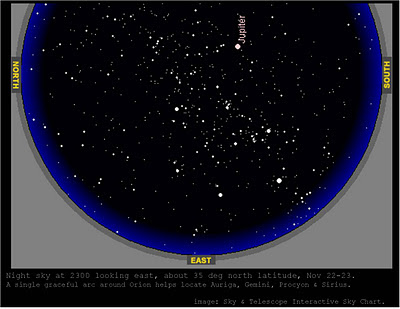 The earth continues to race around its orbit track and as it does so, it is bringing into view the magnificent winter constellation of Orion dominating the eastern sky after dark and rising further into the sky with each passing hour (also, getting a bit further along each passing night, as explained here). H.A. Rey tells us in The Stars: A New Way to See Them: "No other constellation has so many bright stars, five of 2nd mag. and two of 1st mag.: reddish BETELGEUSE in the left shoulder and bluish-white RIGEL in the right foot" (page 46).

Now is an excellent time of the month to view Orion and the several impressive stars which encircle him belonging to other constellations, because the moon is out of the way for the next several days, on its way to a new moon on November 25th. Even after the new moon, it will still remain out of the pre-midnight skies for a few days.

The several bright and important stars which can be easily identified in an arc around Orion are sometimes referred to as the "winter circle" of stars. They are well worth identifying, and they are truly situated in a graceful arc, so that an observer starting at the top of the arc with Capella can easily envision a curving circular path leading to the next bright stars, then the next, and then the next (see the diagram below). 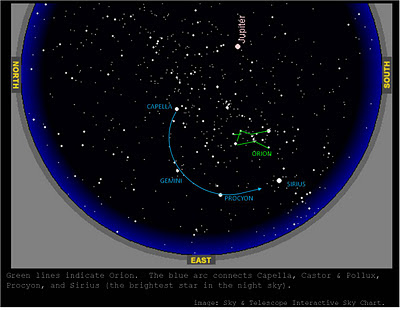 To begin, simply find Orion -- he will be enormous in the east, far larger than you might imagine from the diagram above, which shows the night sky looking east at about 11 pm for an observer in the northern hemisphere (in this case, at a latitude of 35o north along the California coast). The diagram comes from the very helpful free Interactive Sky Chart tool from Sky & Telescope.

Above and to the left of Orion you can locate Perseus and Cassiopeia -- tips for identifying them are described in this previous post. Below Perseus you will find Auriga the Charioteer. His constellation is best distinguished when you can identify the two long horns of the Bull, one of which comes so close to Auriga that it is easy to mistake it for part of Auriga until you become familiar with the two constellations. Then, it becomes a helpful way of picking out the distinctive jutting "jaw" of Auriga (in the outline method created by H.A. Rey -- see the discussion on finding Auriga in this previous post). The final diagram at the bottom of this post labels the constellations discussed herein, with a rough outline of each one.

Auriga contains two bright stars that begin the arc -- first, its brightest star, Capella, and below it another bright star in Auriga, Menkalinan or Beta Aurigae. These two are so bright that it would be easy to mistake Auriga for the constellation Gemini (the Twins) if you didn't know better.

Continuing toward the horizon, however, you will come across the actual constellation Gemini the Twins, and its two brightest stars, Castor and Pollux (Pollux is brighter). They are not as bright as Capella, and they are closer together than Capella and Menkalinan.

These two pairs (Capella-Menkalinan and Castor-Pollux) will enable you to visualize the arc of a large circle connecting them -- continue along this circle and you will curve over to another very bright star, the 8th-brightest in the entire sky, Procyon. It ranks just below Rigel in Orion and Capella in Auriga for brightness (Rigel is the seventh-brightest and Capella the sixth-brightest stars in the heavens).

Continuing along the same sweeping arc will bring you to the brightest star in the sky, Sirius (following Orion through the heavens). Some skywatchers continue past this point, but the arc does not hold up if you do, as the pathway becomes somewhat forced and irregular after this point (it is sometimes called the "winter hexagon" by those who continue on to Rigel and Aldebaran before returning to Capella, but this is a very unsatisfying hexagon and it is best to stop at Sirius).

They are also very important in the study of the ancient myths found around the world, and the evidence for advanced scientific knowledge which the ancients encoded in their mythologies.

For a discussion of the importance of Capella and Auriga, see this previous post.

For a discussion of the importance of Procyon, see this previous post.

And of course, Orion is absolutely critically important, especially as he pertains to the myth of Osiris and Set (also taken up in much greater detail in the Mathisen Corollary book).

For all these reasons, and because it is just an awesome sight, it is an extremely rewarding experience to go out to a dark location with a good view to the east around 10 pm or even 11 pm and observe the beautiful arc of the "winter circle" of stars that surround mighty Orion. 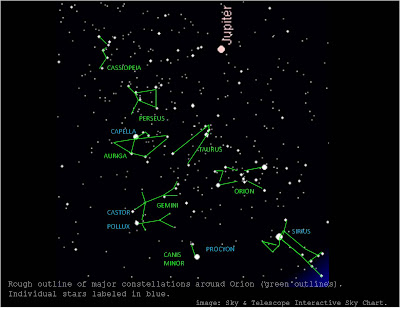 Posted by David Warner Mathisen at 12:37 AM