The Kensington Runestone is back in the news 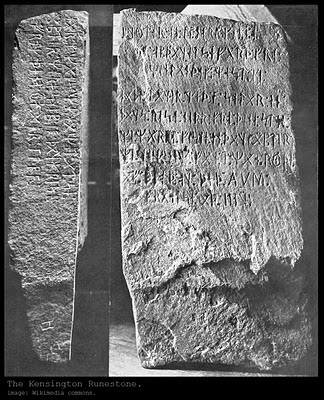 The long-debated Kensington Runestone is back in the news, with this recent post from the excellent blog of Swedish archaeologist Dr. Martin Rundkvist entitled "Kensington Runestone Faker's Signature Found." Dr. Rundkvist's blog Aardvarchaeology has been mentioned previously in the Mathisen Corollary blog in this previous post discussing the Winged Man of Uppaakra.

The Kensington Runestone is a 200-pound slab allegedly found in a field in rural Minnesota in 1898 by a Swedish immigrant named Olof Ohman. It contains a runic inscription on its face and one side which appear to commemorate a visit by a party of Scandinavian explorers in AD 1362, but which has been repeatedly dismissed by academics as a forgery, probably a hoax by Ohman and some of his associates.

The latest dismissal of the Kensington Runestone's authenticity, reported by Dr. Rundkvist, comes from the analysis done by Professor Mats G. Larsson, who points out that the amount of numbers mentioned in the runic inscription may be a key to a hidden message.

The translated inscription reads (in the 1950 translation of Sivert N. Hagen):

8 Gottlanders and 22 Norwegians on
[this] exploration-journey from
Vinland over the west. We
had camp beside 2 sheds, one
day's journey north from this stone.
We were [out] and fished one day; after
we came home, found 10 men red
with blood and tortured. Hail, Mary!
Deliver from evil!
Have 10 men by the sea to look
after our ships, 14-day journey
from this island. Year, 1362.

According to the analysis of Professor Larsson, if you take the numbers in the inscription above, which are (in order of appearance) 8, 22, 2, 10, 10, 14, and then 13 and 62 from the date 1362, you can find a simple ciphered message planted by Ohman himself, which would then clearly indicate that Ohman was the original author of the text and that it thus dates from the late 1800s and not from the fourteenth century at all (even if the stone itself was really dug up from under a tree as described by Ohman).

To find the message, Professor Larsson first reversed the order of the numbers as they appear (producing the series 62, 13, 14, 10, 10, 2, 22 and 8). He commenced at the first line and counted sixty-two words from the left, to find the word "öh." He then proceeded to the second line and counted thirteen words from the right, proceeding in this way to find an apparent hidden message. Dr. Lundkvist relates:

The inscription has twelve lines. Larsson counts the words from the left on odd-numbered lines and from the right on even-numbered lines, arriving at the following:

Dr. Lundkvist explains that this message appears to correspond to the story Olof Ohmans gave about his initial discovery of the stone (that he found it under the roots of a tree he and his son had felled for firewood):

"Öh mans fan vi ved hade ved sten", or in English, "The Öhmans found. We kept/collected firewood at the stone."

So Olof Öhman probably told the truth when he said he found the stone while collecting firewood. And then he carved an inscription on it.

There appear to be a few problems with this method, one of which being the fairly arbitrary moves of reversing the number sequence in the first place, leaving out the two mentions of the number "one" (which, unlike the other numerals in the text, is "spelled out" which may indicate that it is not to be included in the cipher, although including them would obviously change the message), and then the somewhat arbitrary decision to count from the left on the first line and from the right on the second, and so on throughout to find a message.

A bigger problem than the rather arbitrary selections described above (which could be explained as part of the cipher, if Ohman did in fact decide to hide a message in a forged runic inscription) is the fact that the count does not really appear to work out very well. Starting from the very first number, 62, the count does not actually land on the word "öh" in the inscription, but rather on the preceding word, "þeno." A transliteration of the inscription can be found on the Wikipedia page for the Kensington Runestone, in the right-hand column, and the reader can count right there on the page and see. Start from the first word of the first line (which is actually the number 8) and count rightwards sixty-two words.

If the word at the beginning of the second line (which is apparently weathered or worn away, leaving only the letter "o" but which is surmised to have been the word "þeno" which is the dative singular feminine form of the demonstrative pronoun "this") is skipped, then the count of 62 would arrive at "öh," but there is no reason to skip that word even though only one letter remains, and doing so seems to compromise the theory being proposed by Professor Larsson.

From that word, however, counting 13 words to the left does indeed bring the reader to the word "mans" in the text (which is found in the third line from the bottom, not the "penultimate" line).

Proceeding to the third supposed hidden word in the message, a count of 14 from the word "mans" and going to the left does indeed land on the word "fan" (which is found in the seventh line of the text). However, this pattern is not "right-left-right" as described but actually right-left-left.

The count apparently continues to the left for the remainder of the "message." Continuing the count from "fan" to get to "wi" or "vi" one must continue counting to the left again, this time for ten words. The message appears to continue emerging until one reaches the count of 22, which is supposed to land on "ved" and contains the explanatory note "jumping down to the second line when the end of the first line is reached." However, going 22 words in either direction from the word "haþe" at the beginning of the fourth line does not bring one to the word "ved" or close to it (it appears to land on "skip" if one counts to the right and "fan" if one counts to the left).

It is still, of course, possible that the Kensington Runestone is a hoax, but it does not seem that the supposed hidden cipher discovered by Professor Larsson is an open-and-shut case confirming the fact.

On the contrary, there still appear to be some fairly strong arguments for continuing to entertain the possibility that the Kensington Runestone may be an authentic inscription left by fourteenth-century Scandinavian visitors, as discussed in this excellent online document written by anthropological linguist Dr. John D. Bengtson.

That article contains the text of the inscription as well (where readers can count out the ciphers alleged by Professor Larsson) in both runes and modern Roman alphabetical letters, and it also contains some answers to arguments that have been put forth in the past hundred or so years alleging that the runic text contains errors and anachronisms that reveal it to be simply a clumsy forgery. In fact, many of the details that were once argued to be errors have over time turned out to be supported by other early runic texts that are not thought to be forgeries, and reveal a sophistication and level of understanding that is remarkable if the stone was a simple hoax by a Minnesota farmer and some friends, even if those friends were academics.

Dr. Bengtson also cites some historical details preserved among the Native Americans of the Dakota people and told to an anthropologist in 1935 by a 90-year-old Dakota woman, details which appear to support the possibility that Scandinavian explorers visited the Dakota lands centuries ago, staying over one winter before returning the way they had come, never to return.

As we have discussed previously in this blog and in the Mathisen Corollary book itself, individual data points -- whether the Kensington Runestone in Minnesota or the Ruamahanga skull in New Zealand -- do not matter so much by themselves. If the Kensington Runestone did turn out to be a hoax, or the Ruamahanga skull did turn out to have belonged to a misplaced medical skeleton (a ridiculous speculation, but a possibility that most conventional historians appear to accept, rather than admitting the possibility that voyagers could cross the great oceans long before the conventional timeline says they could or did), that is not as important as the fact that there is an enormous pile of other evidence which all appears to point to the fact that the conventional timeline of human history is inadequate.

While an artifact such as the Kensington Runestone might be relatively easy to forge (although the apparent sophistication of some of the runic details indicates that it is not a simple or clumsy forgery, even if it does turn out to be a forgery), other forms of evidence we have examined, such as the hundreds of red-haired and auburn-haired mummies that have been found in Peru, are not so easy to dismiss.

To those who declare that the Kensington Runestone cannot possibly be an authentic memorial of a European visit to Minnesota during the 1300s, we would offer a quotation which Thor Heyerdahl singled out about such matters, by Edgar Smith Craighill Handy (speaking in this case of the continent of origin of the Polynesians): "There is such a variety of possibilities open in the matter of relationships and derivations that my own feeling is that there is only one sure way of being in the wrong, and that is by asserting dogmatically what is not true" (cited in American Indians in the Pacific 8).

This would appear to be an excellent attitude to adopt in this matter. Professor Larsson's creative analysis is commendable, in that it is approaching the Kensington Runestone from a different direction, and trying to find some evidence that others have overlooked. It may be that I am misunderstanding the methodology he used when I find that the numbers he uses do not appear to land on the words of the alleged hidden message. But even if such a message can be teased out of the text, there is ample evidence elsewhere that there have been many other visitors to these shores than we are currently taught in our schools and universities.

Posted by David Warner Mathisen at 12:06 AM