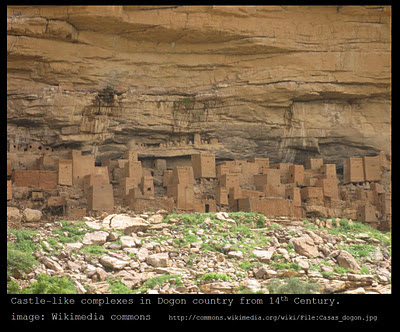 Here is a link to a remarkable article in National Geographic today entitled "'Lost' Fortress of Sahara Revealed by Satellite." The subtitle reads: "Well-preserved settlements of mysterious civilization discovered in Libya."

The article explains that ancient mud-and-brick compounds deep in the Libyan desert some 620 miles south of Tripoli were identified by researchers including Dr. David Mattingly, Professor of Roman Archaeology at the University of Leicester, using satellite and aerial photos. An expedition to the area confirmed that the complex was built by the Garamantes, an ancient civilization described by Herodotus and many later authors, but the investigation had to be suspended due to the civil war which eventually ousted Libyan dictator Moammar Qadafi.

Now, the removal of the Qadafi regime may open the door to further exploration of this important site. Professor Mattingly explains that the Garamantes were an extremely sophisticated North African civilization:

We've built up a picture of them as being a very sophisticated, high-level civilization. They've got metallurgy, very high-quality textiles, a writing system ... those sorts of markers that would say this is an organized, state-level society.

This article from Science Daily notes that the sophistication and importance of the Garamantes was obscured by the ancient Roman description of them as barbaric nomads. That story also quotes Professor Mattingly, in this case refuting the ancient description of this nearly-forgotten civilization:

In fact, they were highly civilised, living in large-scale fortified settlements, predominantly as oasis farmers. It was an organised state with towns and villages, a written language and state of the art technologies. The Garamantes were pioneers in establishing oases and opening up Trans-Saharan trade.

The articles explain that the well-preserved ancient buildings are extensive, orderly mud-brick complexes with a castle-like appearance. Some walls still standing are over thirteen feet in height.

This discovery is extremely significant in the quest for the truth about mankind's ancient past. In chapter seven, "Origins of the Dogon," of his book The Sirius Mystery (first published in 1976), Robert Temple advanced the argument that the Dogon people of Mali are descended from . . . the Garamantes! He cites extensive evidence compiled by anthropologist Eva Meyerowitz and cited by prolific author, playwright and scholar Robert Graves which suggests that the Garamantes emigrated southward in ancient times to the region where the Dogon are found today, arriving there by the eleventh century AD.

Mr. Temple believes that this ancient migration is the original source of the remarkable knowledge preserved by the Dogon, which is discussed in several previous posts including "The knowledge of the Dogon," "Berossus and the Oannes," "The conjunctions of Jupiter and Saturn," and "Supernatural or extraterrestrial?"

Note that the impressive mud structures preserved in Dogon country -- some of them centuries old and in some cases attributed to people who were the "forerunners" or "predecessors" of the Dogon -- appear to bear a remarkable resemblance to the well-preserved mud castle-complexes which have recently been discovered in the original land of the Garamantes! See the image from the Bandiagara Escarpment in Dogon land shown above.

This is a very important aspect of these new discoveries and worth further examination in light of the new evidence.

The alleged advanced astronomical knowledge of the Dogon appears to confirm the fact that the ancient Garamantes were extremely sophisticated as well. In fact, there may have been a connection with ancient Egypt, as Robert Temple points out in the same chapter that the ancient Egyptians were one of only a very few ancient societies practicing circumcision, and the Dogon not only practice circumcision but make it central to their entire religious cultus. (We have already discussed in the posts linked above that conventional historians and anthropologists are loath to admit even the remote possibility that the documented astronomical knowledge of the Dogon could possibly be real, because such an admission would threaten the framework of their entire foundational paradigm, and threaten the zealously guarded tenets of Darwinism as well).

Note that Robert Graves asserted that the Garamantes may well have been the source of much of ancient Greek and even Minoan civilization and culture. In his 1955 text The Greek Myths, he describes extensive evidence buried in myth that the goddess Athena appears to have come from the region of Libya, and that in fact Plato had identified her with the Libyan goddess Neith. Graves points out that goat-skin motifs accompany Athena in many ancient myths (including an association with the powerful Aegis, discussed in this previous post), and that goat-skin aprons are the traditional garments of Libyan maidens.

Graves goes on to assert that:

Pottery finds suggest a Libyan immigration into Crete as early as 4000 BC; and a large number of goddess-worshiping Libyan refugees from the Western Delta seem to have arrived there when Upper and Lower Egypt were forcibly united about the year 3000 BC. The First Minoan Age began soon afterwards, and Cretan culture spread to Thrace and early Helladic Greece.

This chronology would appear to suggest that the civilization of the Garamantes, or their predecessors, was responsible for the flowering of the Minoan civilization and the later glory of Greece. More on the importance of Libya can be found in the Mathisen Corollary book itself (particularly the final chapter). Note that numerous pre-Columbian artifacts allegedly inscribed with ancient Libyan writing have been reported in the Americas (described although not pictured in this previous post).

Finally, note that the Garamantes are not the only advanced ancient civilization who appear to have been relegated to the status of "primitive barbarians" due to that kind of characterization by certain ancient Roman authors. We have seen evidence that the ancient Celts were extremely advanced, and that the accounts of Julius Caesar describe their knowledge of astronomy and science in terms of great respect, and describe their ships as superior to those of the Romans and quite probably capable of blue-water ocean navigation. However, they also received a label of primitive barbarians from antiquity, and are thus most often remembered and depicted as such today.

The accounts of Herodotus (484 BC - 425 BC) do not depict the Garamantes as barbarians. To the contrary, he describes them as "a very powerful people" and possessed of a unique technology in sowing their crops (not an activity typical of nomadic barbarians) -- and that was centuries before the Romans encountered the Garamantes.

Below is a map depicting the region of Libya inhabited by the ancient Garamantes -- note that it corresponds quite directly with the location of these remarkable new archaeological discoveries. The evidence discussed above indicates that this advanced ancient civilization may hold important clues to a revised understanding of the timeline of mankind's ancient past. 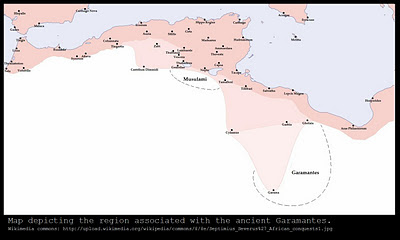