The constellation Auriga and his importance in ancient myth 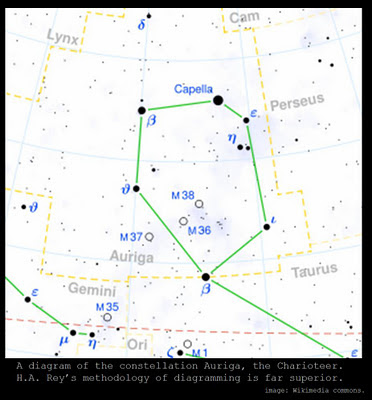 The constellation Auriga, "the Charioteer," is now prominent in the eastern sky after sundown, rising just after 6 pm and making his way upwards towards his transit (highest point) around 3 am, before beginning to arc downwards to the west. Thus, during all of the hours after sundown this important constellation can be easily located just below Perseus, with excellent viewing anytime after 8pm as he climbs through the sky (the sun is setting near 6 pm and twilight ends about a half hour later).

Unfortunately, diagrams like the one above won't be much help for those looking for Auriga if they are not already familiar with the constellation. The irregular hexagon depicted above using the stars of Auriga (and borrowing one from Taurus) is not a very intuitive way to search out a charioteer in the sky.

As usual, the more conceptual outline methodology of H.A. Rey will be much more useful in remembering what stars to look for when you are outside, and much more helpful in tracing out the stars of Auriga once you are actually looking at them. His diagram of the Charioteer looks more like the head of a lantern-jawed chariot-driver in profile, and can be seen in the diagram below, where his method of connecting the stars has been superimposed in blue lines: 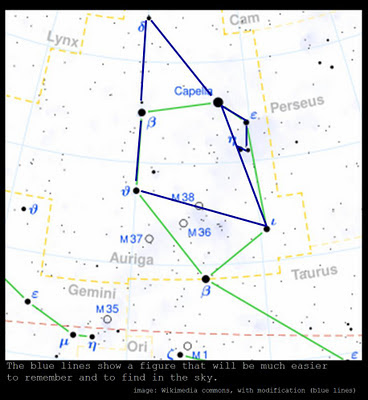 Fortunately, the constellation Auriga is made up of fairly bright stars, and they form a pretty distinctive group in an area of the sky where they are quite easy to see. The trickiest part is the fact that one of the brighter stars of Taurus (beta Tauri, aka El Nath) is located so close to the stars of Auriga that it is easy to think it is part of the Charioteer (and indeed, the diagram at top uses beta Tauri as if it were part of Auriga). The discussion which follows should help clear up all confusion about this important constellation.

As Auriga is rising in the east, he can be seen below Perseus, who can be located using the distinctive "W" of Cassiopeia, as described in this previous post about the Pleiades (which are located near Perseus' lower foot as he rises). The diagram below shows the vicinity of Auriga, drawing a large circle around the most noticeable stars of Auriga, plus beta Tauri/El Nath (since when you first look for Auriga you will no doubt notice El Nath in the same glance): 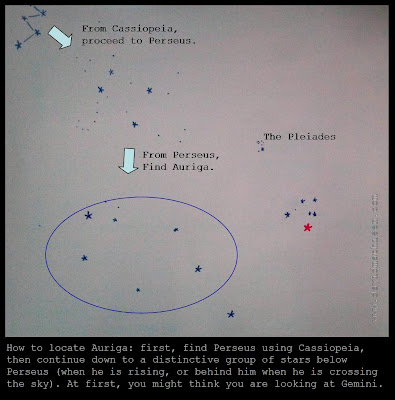 Auriga's brightest star, Capella (alpha Aurigae), is one of the brightest in the sky (the sixth-brightest, in fact), and because it is adjacent to the constellation's second-brightest star, beta Aurigae, you can be excused for thinking you are looking at Gemini (the Twins) when first finding the stars of Auriga (especially since Gemini is actually nearby, still below the horizon in the diagram above but rising right below Auriga). 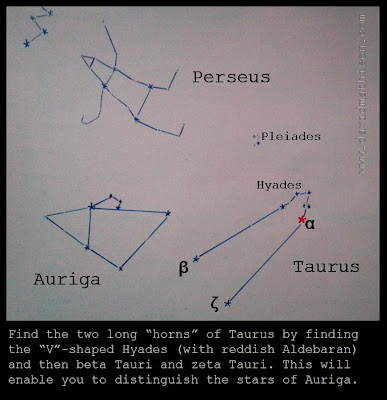 By finding the V-shaped or wedge-shaped cluster of the Hyades (shown in the diagram above -- it contains the brightest star in Taurus, reddish Aldebaran or alpha Tauri, marked above with an alpha and drawn in red) you will be able to see the unmistakable long horns of the Bull that are indicated by the stars beta and zeta Tauri (marked above with the Greek letters beta and zeta).

Once you have identified this portion of Taurus, you can easily distinguish between the stars of Taurus and the stars of Auriga, and trace out the Charioteer's profile (the star at the very peak of his triangular cap is very faint, but visible).

Auriga is an important constellation for the thesis of Hamlet's Mill. In chapter XIX, "The Fall of Phaethon," Hamlet's Mill authors Giorgio de Santillana and Hertha von Dechend explain that Auriga is associated with the extremely significant myth of Phaethon, the rash son of the sun-god Helios who asked to drive his father's chariot of the sun and could not be dissuaded despite the pleas of his father. When, in spite of all the advice Helios had given him, Phaethon lost control of the horses of the sun, the runaway chariot began to burn great swaths of earth, and Phaethon had to be destroyed by a thunderbolt from Zeus.

De Santillana and von Dechend explain, "Phaethon falls into the river Eridanus where, according to Apollonios Rhodios, the stench of his half-burned corpse made the Argonauts sick for several days when they came upon it in their travels (4.619-23)" (251-252). The connection with Eridanus is immortalized when Phaethon is placed among the stars: "Thus tradition holds that after the dreadful fall of Phaethon, and when order was re-established, Jupiter 'catasterized' Phaethon, that is, placed him among the stars, as Auriga (Greek Heniochos and Erichthonios); and at the same time Eridanus was catasterized" (255).

We have already seen that this lost Golden Age is associated with the precessional shifting of the celestial realm, and specifically with the transition from the Age of Gemini to the Age of Taurus -- see for instance the discussion in previous posts such as "Celestial imagery in the cave paintings of Lascaux," "Jupiter," "Don't miss Saturn this month," and "The conjunction of Jupiter and Saturn and the mythology of Saturnian figures such as Osiris, Ptah and the Oannes."

This connection makes Auriga an important constellation indeed. Further, de Santillana and von Dechend reveal that the same Phaethon myth seems to appear in the legends of the Native Americans of the New World, including a very clear parallel in the myths told by the Nuxalk nation of the area now known as British Columbia (de Santillana and von Dechend refer to them as the Bella Coola and discuss their version of the Phaethon legend on page 253). While it is remotely possible that the startlingly similar stories could have arisen in both the Old World and the New World, this parallel is another important clue that there was ancient contact with the Americas, denied by the conventional historical paradigm (see links to other such clues here).

For all these reasons, Auriga is well worth locating in the eastern sky as it rises this time of year (especially the next few days when the moon is low in the west before midnight on its way to setting, although it grows larger and fuller and sets later and later and becomes more and more dominant in the night sky as it approaches the full moon on November 10).

As an added bonus, the majestic constellation of Orion begins to rise around 9:30 pm and makes a truly awe-inspiring sight as he emerges from the horizon below the stars of Taurus shown in the diagram above.