Cygnus and Aquila in the Milky Way 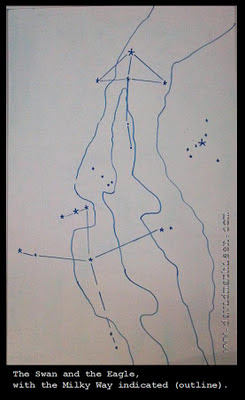 Although they are rising earlier and earlier and therefore are rotating farther and farther towards the western horizon during the prime viewing hours after sundown, the majestic constellations of the Swan and the Eagle are worth mentioning this time of year, due to some of the associations of these celestial birds with enduring traditions and celebrations.

The stars of the constellation Cygnus (the Swan) form a distinctive shape in the night sky, which strongly resembles a soaring bird. The brightest four stars in the Swan make up the two triangular outstretched wings. Perhaps the easiest way to locate Cygnus is to go to a very dark area where you can view the starry band of the Milky Way ascending from one horizon and arcing across the sky: both the Swan and the Eagle will be found within its pathway, as diagrammed above.

Another method for locating the Swan is to use the two stars at the back of the bowl of the Big Dipper as pointers (the forward two stars of the Big Dipper's bowl are traditionally known as "the pointers" because they point the way to the North Star if one uses them to create a mental line; the rearward two stars of the bowl can be used the same way, and they point to Deneb, the brightest star in the Swan -- this trick comes from page 38 of H.A. Rey's superlative book on the stars, a book which is discussed here and here).

The brightest star in the swan, Deneb, makes up one of the points in the famous "Summer Triangle," along with Altair in the Eagle and Vega in the Lyre, as shown below. The reason this triangle is associated with summer is that, in the northern hemisphere, the position of earth on its orbital path in the summer brings these constellations and their bright stars to a prominent place in the center and highest part of the dome of the sky during the hours after sunset. As stated before, they are now sinking lower into the west each night as the earth continues on its orbit, causing them to be in the eastern skies earlier and earlier and thus sink westward much earlier than they did during the summer. 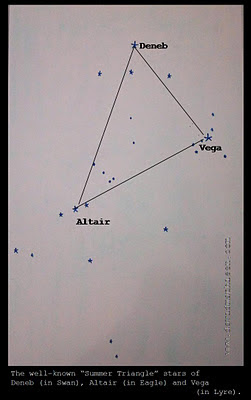 Stargazers desiring to see the Summer Triangle more easily might try squinting at these constellations, which has the effect of blotting out all the fainter stars and leaving only the three brightest stars to be visible (that is, Deneb, Altair and Vega).

Cygnus has a long neck, outlined in the top diagram (the diagram which shows the outline of the Milky Way), and the line heading towards the neck makes up a grouping called the Northern Cross for obvious reasons. However, the stars of the head and neck are quite faint, and it is perhaps most easy to picture Cygnus as outlined below. This is not the full outline shown in the books by H.A. Rey, which include the fainter stars of the feet, as well as fainter stars which extend the wings of the swan to a wider and even more majestic wingspan, but it is perhaps the easiest way to spot Cygnus if you're not familiar with the constellation, and it is quite magnificent and large in the sky, even in this "core" or abbreviated outline. 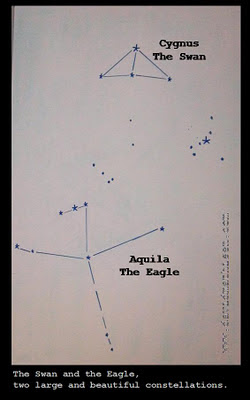 Soaring towards the Swan as if to make a head-on collision is the constellation of Aquila the Eagle, easy to make out using the three stars of the Eagle's head, with bright Altair in the center. The Eagle's wings are marked by fairly bright and readily visible stars as well, and his mighty wingspan is very impressive once you locate him. We discussed the Eagle and the three stars including Altair (the others are Alshain and Tarazed) in this previous post describing Comet Garradd. The delightful little constellation Sagitta the Arrow is near the Eagle's head, and its stars are depicted in the diagrams above, although the shape of the Arrow itself is not outlined (we're just concentrating on the two heavenly birds right now).

The constellations of Cygnus and Aquila are very important mythologically. The mighty protective eagle atop Yggdrasil the World-Tree is very likely related to Aquila, especially as he has a "bright-eyed hawk" perched upon his beak, which could be a way of describing the brilliant stars at the head or beak of this constellation.

Further, as explored in more detail in the Mathisen Corollary book, the goddess Isis disguised herself as a bird and flew around the tree in which Osiris was entombed after he was slain, an event with many echoes in other mythologies. Author Andrew Collins believes that Isis is closely associated with the constellation Cygnus, and he explores the importance of Cygnus extensively in his book The Cygnus Mystery: Unlocking the Ancient Secret of Life's Origin in the Cosmos. Without necessarily agreeing with every conclusion that he reaches, it is clear that he has uncovered extensive evidence for the importance of this constellation and echoes to myths and traditions around the world.

Below is a depiction of Isis with wings from the tomb of Pharaoh Seti I (the father of Rameses II) which bears a very striking resemblance to the arrangement of the stars of the celestial Swan. We have also explored some of the important myths of gods and goddesses who wore winged bird-suits in the discussion of the recently-discovered artifact known as the "Winged Man of Uppaakra." Mr. Collins points out that the Valkyries of Norse myth also were associated with swan-wings and at least one important Valkyrie with a full swan-suit. 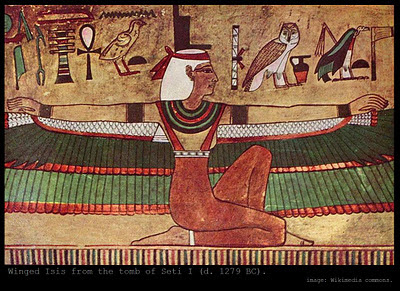 His theory also explores the importance of the shamanic ability to turn into a bird-form in order to ascend to the heavens.

Interestingly, Mr. Collins notes that the constellation Cygnus is associated with both geese and swans in many myths and traditions (he even has a chapter in his book entitled "The Swan-Goose of Eternity"). He notes that the feast of St. Martin, which falls on November 11, often featured a roasted swan or (in more recent times when eating swans became less popular) a roasted goose. Note all the associations with geese in the traditions surrounding the life of St. Martin described here, as well as the tradition of eating a Martinsgans (or "Martin Goose") on November 11.

In the chapter of his book entitled "The Waters of Life," Mr. Collins describes the Martinmas feast of the ancient London livery company of the Vintners (the Worshipful Company of Vintners). According to Mr. Collins, their patron is St. Martin of Tours, and on his holy day (November 11),

they performed a swan feast, during which a roasted swan was ceremoniously paraded about the banqueting room before being eagerly consumed by all present. Although this tradition continues, today the Vintners eat a goose on Martinmas, while instead of a roast swan being paraded around its place is taken by a stuffed bird. When not in use it is kept in the Swan Room at Vintners' Hall.

Mr. Collins also points out that the Vintners are one of only two livery companies which participate in the annual ritual of "swan-upping" along the Thames each July.

Ever since the end of World War I, November 11 has of course also been known as Armistice Day, Veterans Day and Remembrance Day. On this important day of the year, after the sun goes down and if you have a clear sky, you may wish to go out and spend some thoughtful time contemplating the beautiful and important constellations of Cygnus and Aquila in the Milky Way.
Posted by David Warner Mathisen at 12:26 AM