More on the Maya cycles 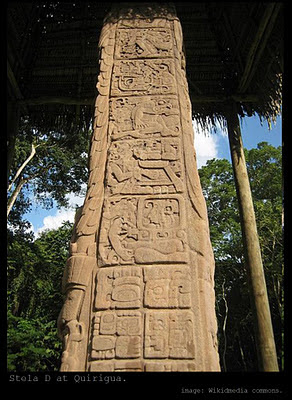 In the previous post which touched on the much-hyped significance of 2012, we saw a National Geographic video which -- while disappointingly sensationalized and disjointed -- actually points us towards some very worthwhile concepts.

Unfortunately, that video falls into the very formulaic style typical of many such "documentaries" -- a serious-sounding narrator who asks questions such as, "What could happen on December 21, 2012," followed by a cut to dramatized video of people being destroyed by enormous ocean waves or expanding fireballs emanating from volcanic explosions, interspersed with slow-motion footage of modern actors dressed up like ancient Maya wearing skull masks and feathered headdresses or painted from head to foot with jaguar-skin patterns.

The film also goes off on a tangent about polar-shifts and earth-crust-displacement, briefly mentioning the role of Charles Hapgood (who is mentioned in this previous post) in promoting that theory during the twentieth century. Some fairly interesting evidence is also explored from the Quelccaya Ice Cap, which is used to argue that perhaps the Maya cycle started with an abrupt climatic catastrophe over 5,000 years ago, with the implication that another such abrupt change may take place in 2012. However, we are never given any theory as to what may have caused the proposed abrupt change back then or any tie-in to the speculative upcoming one either. Was it polar wander? Does that mean polar wander is about to take place again? Those loose ends from earlier in the "documentary" are never tied up. Instead, the earnest-sounding narrator suggests that "we" may be hastening another such world-ending climate disaster (the film cuts to pictures of crowded city streets and then smokestacks pouring forth clouds): does this mean that industrial excesses caused the proposed abrupt climate event 5,200 years ago? Were the Maya building coal-fired power plants? Is the film suggesting that carbon dioxide emissions cause polar wander and earth-crust-displacement? The film's producers don't say, although they seem strangely to suggest it.

By the end of the film, the directors have managed to cast the Maya calendar cycle as a warning about "abrupt climate change" such as "we're having now" and reduce the role of 2012 to another lecture on global warming.

That's too bad, because in the middle of the video there is a segment with author John Major Jenkins, who explains that the calendar cycle end may well have an astronomical phenomenon at its core. The video spends a few minutes on this thread of analysis but never really returns to it again.

Mr. Jenkins is an independent researcher who has written at least four books about Maya cosmology and related topics. His website, which discusses the possibility that the December 21, 2012 date that ends the Maya long-count cycle (and starts a new one, he points out) may be timed to coincide with the alignment of the winter solstice sun and the center of our galaxy, can be found here.

Astronomy, the calendar, and the Creation Myth were facets of the same cosmology. Beliefs about cycle endings, especially the big one in 2012, were represented in these traditions and revealed how the creators of the Long Count thought about 2012. It was not perceived as some dramatic doomsday apocalypse, as our modern media repeatedly prefers to portray it. Instead, the creators of the 2012 calendar utilized sophisticated spiritual teachings intended to facilitate a process of spiritual transformation and renewal. 3.

In a recent interview on Red Ice Radio, Mr. Jenkins laments our media's consistent desire to present a "superficial perspective on a very profound topic" (about 4:00 into the interview).

His assertions that the calendar cycle has an aspect of spiritual renewal find some support in some quotations of guests on the National Geographic video itself, although this angle is disappointingly not pursued any further. At about the 18:00 mark in the video, the Maya tradition that the gods had to destroy successive ages of mankind is discussed. At one point, the gods are said to start over with humanity because they want to create "someone that reveres us, someone that remembers our names."

This is significant. It is strongly reminiscent of a theme we have examined previously, in the blog post entitled "A brief examination of the importance of chakras and singing praises," and again in "How much time do you spend chanting praises?"

Other important themes which can be seen to be related to this larger issue is the concept of cyclical time versus linear time, or cyclical progress versus the modern belief in linear progress. We have touched on this subject in previous posts such as "The Fourth Turning and cyclical time and history" and "Reflections after a 20-year reunion."

It has been alleged in several previous posts that the modern belief in endless and inevitable progress may be blinding us to the evidence that mankind has somehow slipped from extremely advanced knowledge into darkness and barbarism in a major way at least once in its past history. Of course, even the proponents of the linear progress myth admit that there have been small and temporary setbacks, but are not willing to admit a cycle of the magnitude that we are talking about here -- from a pinnacle of knowledge that the defenders of the orthodox timeline of human history refuse to admit mankind could have possessed so many thousands of years ago. It is fairly clear that this modern myth of linear progression (which is linked to the Darwinian mentality that conquered academia about a hundred years ago) is at least partly responsible for the hostility towards all evidence of advanced ancient knowledge, and towards all discussion of such evidence.

The dawn of the year 2012 should cause us to consider some of these important subjects more carefully and urgently. Unfortunately, the media's desire to sensationalize an apocalyptic vision of 2012 has many people experiencing "doomsday fatigue" and tuning it out.

If you haven't thought about incorporating some chanting, perhaps this would be a good year to start!
Posted by David Warner Mathisen at 12:30 AM