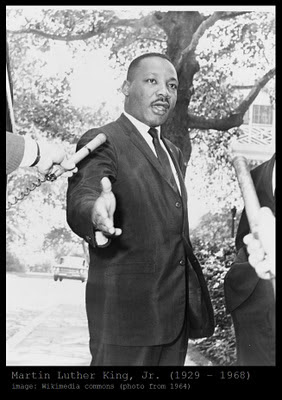 The life and work of Dr. King opposed oppression and discrimination on the basis of race, particularly in the United States. This message, however, transcends any one specific national or cultural setting or time period.

It also transcends the discrimination against one specific "race," for he argued for a universal brotherhood of humanity and opposed violence against other human beings, whether physical violence or discriminatory behavior and oppression that is based on the threat of violence, even if no overt violence is present. This fact is clear from the expansive and stirring final words of his famous "I Have a Dream" speech, in which he declares:


And when this happens, when we allow freedom to ring, when we let it ring from every village and every hamlet, from every state and every city, we will be able to speed up that day when all of God's children, black men and white men, Jews and Gentiles, Protestants and Catholics, will be able to join hands and sing in the words of the old Negro spiritual, "Free at last! free at last! thank God Almighty, we are free at last!"

From these words it is clear that his vision went beyond exclusion or oppression based upon any one specific way of dividing up the human family, but that he opposed exclusion based on ethnic grounds, religious grounds, and by extension all other grounds. It is also clear from his choice of language that he believed human equality was based upon the fact that all people are made in God's image, and that they can all be equally described as "God's children."

Another important aspect of Dr. King's example was his rejection of physical violence as a means of addressing grievances. In "Nonviolence: the Only Road to Freedom" (May 1966), he said:


Only a refusal to hate or kill can put an end to the chain of violence in the world and lead us toward a community where men can live together without fear.


If one is in search of a better job, it does not help to burn down the factory. If one needs more adequate education, shooting the principal will not help, or if housing is the goal, only building and construction will produce that end. To destroy anything, person or property, can’t bring us closer to the goal that we seek.

This is an important topic which has been examined previously in posts such as "A Memorial Day mediation on the Mystery of Easter Island" and "How does barbarism win?" Both posts discuss situations in which grievances were apparently used as an excuse for violence against people designated as different or deserving of retaliatory violence.

Today, as we honor the legacy of Martin Luther King, Jr., it is very appropriate to consider these issues, and their implication for the future of civilization.
Posted by David Warner Mathisen at 10:32 AM