Leo rising into prominence in the evening sky 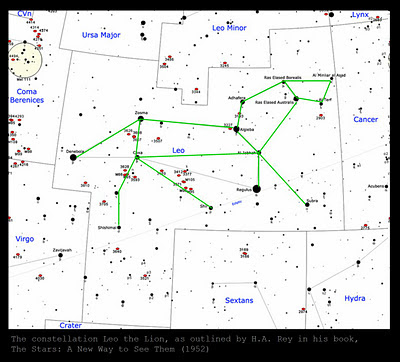 As the earth continues in its annual orbit around the sun, the constellations you can see at night during the early part of the evening prior to midnight continue to "advance," rising earlier each night by about four minutes (as explained in this previous post). This means that, to an observer at the same location at the same time of night, on successive nights the constellations will all be about a degree ahead of where they were at the same time the night before -- since they rise four minutes earlier, they will be four minutes higher than they were the previous night as earth progresses.

Thus, the stars of Taurus which used to dominate the east shortly after sunrise are now far advanced, and the stars of Orion (which are behind those of Taurus) which were barely peeking over the horizon in the early night hours when Taurus was getting higher are now themselves much higher in the sky in the early evening hours before midnight.

This brings up the constellation Leo the Lion, who was rising after midnight back in early November when last we mentioned him, but who now breaks above the horizon at about 8 pm and is rising majestically into the eastern sky by 10 pm, reaching his apex right about 3am.

Leo is an important constellation. Of course, Leo is part of the zodiac, the belt of constellations along the ecliptic, through which the sun and planets pass. We have seen evidence that the imagery of the lion as a guardian may stem from the time when the sun was rising in the region of the constellation of Leo when the important star Sirius made its annual return to the skies.

One of the pioneers of the academic field of the history of science and scientific thought, Willy Hartner (1905 - 1981), published an influential essay with historian of Islamic art Richard Ettinghousen (1906 - 1979) in 1964 called "The Conquering Lion, the Life-Cycle of a Symbol," which argued that the relative positions of the constellations of the Lion and the Bull give rise to the imagery of a Lion attacking (and subduing) a Bull. Their theory was that the culmination of the stars of the Lion (when they are highest in the sky, crossing the meridian) takes place when the stars of the Bull (which are ahead of the stars of the Lion) are sinking below the western horizon. Thus, the Lion can be seen as triumphant just as the Bull is seen fleeing from the scene (or descending into the netherworld, dying).

He argues that this celestial symbolism is behind the familiar ancient depiction of the lion-bull combat, which is very ancient (found at least as early as 1000 BC). Some examples are shown below: 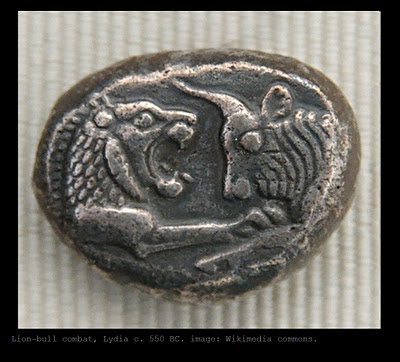 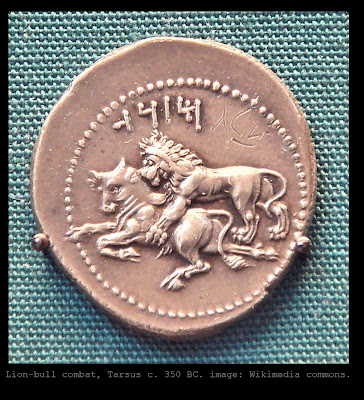 Professor David Ulansey, author of the important work Origins of the Mithraic Mysteries, argues that this imagery has strong parallels to the imagery employed in the Mysteries of Mithras, and that Mithras appears to have replaced the Lion in the Mithraic imagery.

It has also been suggested that the Lion-Bull combat scene is connected to the Lion and Unicorn symbols of the United Kingdom, with the Unicorn replacing the Bull (both being horned animals).

It may even be possible to see a connection to the familiar Bull and Bear imagery of Wall Street.

There are other important connections that can be suggested surrounding the constellation Leo the Lion. Be sure to go out and look for it in the evening sky in the upcoming days and weeks.

Posted by David Warner Mathisen at 12:09 AM