The Ganges Fan, the Indus Fan, and the Great Flood 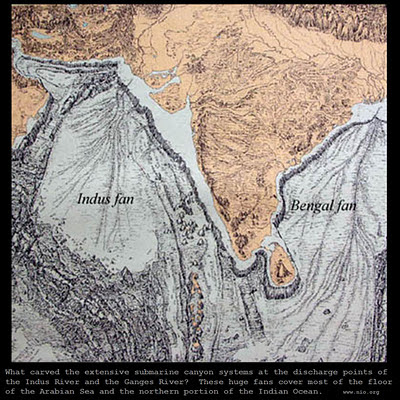 In the previous post we discussed the lengthy undersea ridge pointing towards the region of the Himalayas and how this ridge provides powerful supporting evidence for the validity of the hydroplate theory of West Point and MIT graduate Dr. Walt Brown.

The northern section of that huge ridge sits right next to another enormous geological feature which likewise supports the hydroplate theory: the massive Ganges Fan (also known as the Bengal Fan), a tremendous network of canyons carved in a pattern resembling a mighty river-system on land, but stretching across the floor of the Bay of Bengal at depths of 2000 meters to over 5000 meters beneath the surface, starting at the mouth of the Ganges and running all the way down at some points to well south of the equator, terminating in the Ceylon Abyssal Plain near the Anafasiy Nikitin Seamount.

On the other side of India, in the Arabian Sea, a similar fan can be seen emanating from the terminus of the Indus River and stretching across the entire Arabian Basin at the bottom of the Arabian Sea, at depths well in excess of 4000 meters in its southernmost regions.

These submarine canyons -- and the many others found around the world such as the Monterey Canyon discussed in this previous post, as well as those cutting into the continental shelf beyond the mouth of major rivers such as the Hudson, the Amazon, and the Congo -- pose a real difficulty for conventional geological theory, which eschews catastrophic explanations for geological features and cannot possibly admit to the possibility of a worldwide flood. These steep-sided canyons resemble those carved on land by the rushing waters of rivers, but they are beneath the ocean's surface at great depths.

The conventional explanation currently popular is that "turbidity currents" that carry mud and sediments under the sea somehow gouged out these enormous fan systems -- a fairly ridiculous explanation. Discussions of how this might work can be found on the Wikipedia entry for "submarine canyons" under the heading "formation," as well as in more scientific discussions such as the one found in this report from 2000.

Dr. Brown's hydroplate theory proposes a much more plausible explanation. After the catastrophic flood event and the sliding and buckling of the continents and the deepening of the ocean basins (particularly the Pacific Basin), flood waters rushed off of the continents towards the oceans, carving the river basins we see today on land, and pouring off the continental shelves (which were still above sea level) and carving the submarine canyons we see today as they did so.

The ocean levels were much lower then than they are today, and the continents and their continental shelves much higher -- over time, the weight of the thickened continents would cause them to sink into the crust, which had the effect of raising the sea levels by thousands of feet. We have discussed this gradual process in previous posts, as well as the fact that this theory would explain the undersea ruins -- some of them at great depths -- which explorers may have found in several places around the world (and why this explanation is superior to an explanation that relies entirely on ice-age melt).

Submarine Canyons. The ocean floor has hundreds of canyons, some that exceed the Grand Canyon in both length and depth. One submarine canyon is ten times longer (2,300 miles), so long it would stretch nearly across the United States. Many of these V-shaped canyons are extensions of major rivers. Examples include the Amazon Canyon, Hudson Canyon, Ganges Canyon, Congo Canyon, and Indus Canyon. How were canyons gouged out, sometimes 15,000 feet below sea level? Did ancient rivers (or major drainage paths) cut these canyons when sea level was lower or the ocean floor was higher? If so, why did those elevations change? Swift rivers supposedly cut most continental canyons. However, currents measured in submarine canyons are too slow, generally less than one mile per hour. Frequently, the flow is in the wrong direction. Submarine landslides that produce dense, muddy currents sometimes occur. However, they would not form the long, tributary patterns that characterize river systems and submarine canyons. Furthermore, experiments with thick, muddy water in submarine canyons have not demonstrated any canyon-cutting ability.

Note that these submarine canyons which were carved by floodwaters rushing off of the rising continents are very different from oceanic trenches, which pose different problems for tectonic theorists and which Dr. Brown addresses on that page and on following pages as well.

Few people in the general public are even aware of the existence of these massive submarine canyons, or of the networks of canyons such as the Indus Fan and the Ganges Fan (aka the Bengal Fan). However, they are yet another in a long list of geological clues which indicate fatal problems with the reigning non-catastrophic theories of earth's past.