The knowledge of the Dogon 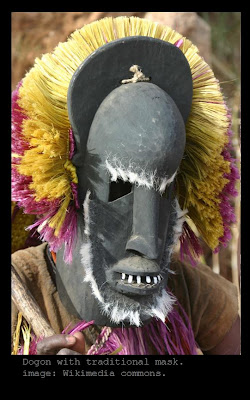 Many readers may be familiar with the king-sized puzzle posed to traditional academia by the traditional beliefs of the Dogon people, who live in the West African nation of Mali. Beginning in the 1930s, French anthropologist Marcel Griaule (1898 - 1956) undertook a series of visits to the Dogon, eventually resulting in their decision to impart to him many aspects of their closely guarded and most deeply-held beliefs.

According to Griaule's own descriptions, published with contributions from his student and fellow anthropologist Germaine Dieterlen (1903 - 1999), much of the Dogon's belief system was centered upon the star Sirius, which they call sigi tolo ("the star of Sigui"), and specifically on a tiny companion to that star which they name po tolo, which means "the po star," po being the name they give to the smallest seed they know of, the Latin genus of which is Digitaria. This might be something like naming a star "the sesame seed star" or "the poppy seed star" to us.

These two stars, the larger bright star and its companion po tolo, the Dogon describe as having a mutual orbit about one another in the shape of an ellipse which takes fifty years, and they further say that po tolo is the smallest thing imaginable but also the heaviest. The absolutely stunning aspect of this secret knowledge which occupies such a central place in Dogon religion is that Sirius really does have a tiny star, Sirius B, which is extremely small and extremely heavy, but that this was not discovered until recent centuries with modern telescopes and astronomical techniques -- it cannot be perceived with the naked eye. 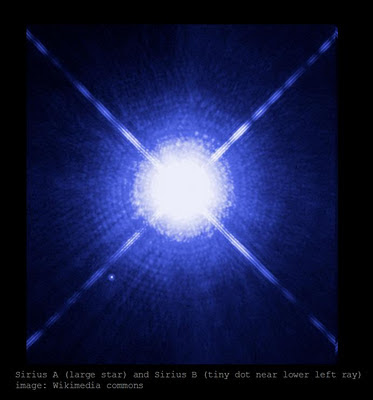 Further, the Dogon apparently are aware of Jupiter's four "Galilean" moons (so-called because they were first reported by Galileo with his telescope -- they are also invisible to the naked eye) and always depict Jupiter with four dots around it (or, if using a rock to depict Jupiter on the ground, with four smaller rocks around it).

Conventional academics, of course, have bristled at the problem posed by Monsieur Griaule's allegations about Dogon secret knowledge, disputing that he understood them correctly, or else arguing that Griaule or some other Europeans must have accidentally imparted news of recent astronomical developments to the Dogon during the eighteen hundreds or early nineteen hundreds, and that the Dogon must then have adapted their belief system around this new information, giving it an appearance of great age even though it was all quite lately learned.

However, in his extensive examination of the subject which began in the 1960s and was not published until 1976 as The Sirius Mystery, Robert Temple (mentioned in this earlier post on the age of the Sphinx of Giza) demonstrates quite conclusively that Dogon beliefs appear to preserve esoteric knowledge regarding Sirius that was known to the ancient Eyptians and Sumerians, and which was later preserved in a more garbled form by the ancient Greeks. He argues that the Dogon appear to have preserved the Egyptian form of the mystery, and provides some convincing evidence from ancient history to explain how that knowledge ended up among this people in Mali (as well as in their neighboring tribes, who appear to have preserved many of the same traditions).

In fact, Mr. Temple provides so much evidence of advanced astronomical and geodetic knowledge preserved in the monuments of extremely ancient civilizations that he demonstrates that the real mystery is not "how did the Dogon come to know about this information?" but rather, "how did the predecessors of the most ancient civilizations that we know about come to know it?"

As most who are familiar with his work know, Mr. Temple's answer to that question is that this knowledge was imparted to mankind at a very ancient point by extraterrestrial visitors from the very star complex of Sirius itself (which is about 8.6 light years from our system, and which some researchers believe may actually be a distant partner to the sun, whose interaction with our system causes very long-period cycles in human history -- further, their mutual orbital path appears to be stunningly similar to that described by the Dogon in their traditional drawings).

Mr. Temple provides evidence to support this theory in the traditions of the Dogon themselves, who apparently so state it, describing amphibious beings from another world whose description matches very closely some of the ancient traditions recorded by historians such as the Hellenistic-era Babylonian author Berossos who described an ancient amphibious visitor who imparted knowledge to the Sumerians.

This explanation need not be the only explanation for the apparently ancient knowledge of Sirius B and other details that we thought were strictly the province of modern astronomy. We can certainly argue that modern man knows about Sirius B without arguing that we must have learned that information from visitors from the star system of Sirius itself. If someone objects by saying, "Of course! That's because we learned about it using science!" it might be then asked, "why could the ancients not have learned about it the same way, using science?" The fact is that the ancients apparently possessed a far more advanced "science" that conventional history is ready to give them credit for.

In fact, as we have argued in this blog and as is explained in the Mathisen Corollary book, it is apparent that the mythology of the ancients was an extremely sophisticated way of preserving and encoding what we would today call "scientific knowledge." As Robert Temple himself quite eloquently explains in his book, in the chapter titled "The Hounds of Hell":

Perhaps something of the true meaning of the myths is now becoming evident. The ancient peoples were not concealing information from us out of spite. Their purpose in disguising their secrets was to see that those secrets could survive. In fact, so successful were the ancient Egyptians in accomplishing their purpose, that the Greeks often preserve earlier Egyptian secrets in total ignorance of their true meaning, retaining only through an innate conservatism certain peculiar archaic details which we now find to be so important.

Based on this very coherent and probable explanation for much of what we find in myth (a conviction that was earlier expounded by the authors of Hamlet's Mill), the fish-like beings found in myth may not be meant to convey visitors from another planet at all, any more than the fifty-headed monsters or fifty rowing Argonauts are meant to convey actual physical counterparts either (Temple argues quite cogently that they probably encode the fifty-year orbit of Sirius B and Sirius A around each other).

However, it is fairly clear that the extraterrestrial explanation is much more likely to be correct than is the conventional explanation of mankind's ancient past, which has absolutely no way to explain the advanced knowledge of the spherical earth -- let alone the advanced knowledge of a distant star system -- displayed by the earliest civilizations discussed in Mr. Temple's work.

It is possible that early mankind had advanced knowledge and understanding because he was divinely created and started out advanced and not primitive (in contradistinction to the Darwinian timeline of slow and laborious progression), or it is possible that early mankind gained advanced knowledge and understanding at the intervention of extraterrestrial visitors. However, it is quite difficult to continue to argue that the knowledge encoded by the earliest Egyptians and Sumerians described in Mr. Temple's book is the result of civilizations which were just beginning to emerge from millennia of hunter-gatherer existence following a descent from apelike predecessors.

In this case, Mr. Temple's extraterrestrial hypothesis strikes us as very closely paralleling the dilemma admitted by Richard Dawkins in the infamous interview with Ben Stein, in which he blurts out that no one knows how the first self-replicating molecule could have arisen on earth, and so it "could have come about" that it was planted here by aliens! In other words, alien visitation is more likely than the standard Darwinian drivel that is taught to children in schools in the most "scientifically advanced" nations on earth.

We would argue that the incredible knowledge preserved by the Dogon falls into exactly the same category. You can explain it by some form of divine creation, such as the Biblical account or something similar, or you can explain it by resorting to extraterrestrial visitors. However, if you try to explain it using the conventional Darwinian timeline, you will run into insurmountable problems (which is why most conventional academics instead choose to deny that the Dogon really know about Sirius B at all).

So, while we don't necessarily agree with all of Robert Temple's conclusions about the Dogon and extraterrestrial visitors, we do not believe that anyone should laugh at him for suggesting extraterrestrials as the solution to the problem. The only explanation that appears really ridiculous is the stubborn denial of the facts that is offered by the defenders of conventional orthodoxy in this case.