Berossus and the Oannes 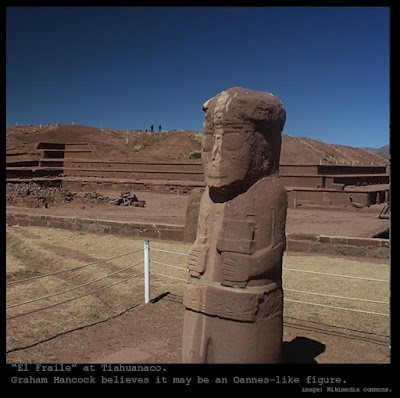 In his groundbreaking book, The Sirius Mystery, discussed in this previous post, Robert Temple presents convincing arguments for his thesis that the inexplicable understanding of the invisible star Sirius B (and its 50-year orbit) and other astronomical truths by the Dogon people of Mali may have originated from extraterrestrial amphibious beings who imparted their knowledge to the Sumerians and Egyptians, or their predecessors.

Central to his arguments are the accounts of the Hellenistic-era Babylonian priest and astronomer Berossus (sometimes spelled Berosos, Berossos or Berosus), whose actual histories have not survived but who was cited by numerous ancient writers. Berossus described a series of amphibians called the Oannes, who were credited by the Babylons with teaching them all the sciences of civilization and in fact enabling the founding of their civilization. These Oannes were described as having a body like a fish, or a curious "complicated form between a fish and a man," and to plunge beneath the sea when the sun became too hot during the day, as well as every night. Several representations of these intelligent civilizing beings are preserved in ancient Babylonian art and cylinder-seals.

Perhaps the strongest point that Mr. Temple makes in his argument that these accounts of the ancient historians are based in truth and not fable (besides the fact that ancient civilizations appear to have possessed knowledge that they should not have been able to know at very early stages) is his translation of the words used by the ancients to describe these creatures. The nouns chosen to describe this race of beings mean "an abomination" and "a repulsive one." Says Robert Temple:

If ever anything argued the authenticity of their account, it was this Babylonian tradition that the amphibians to whom they owed everything were disgusting, horrible, and loathsome to look upon. A more normal course for any invented tradition of the origins of civilization would have been to glorify the splendid gods or heroes who founded it. But instead we find specific descriptions of 'animals endowed with reason' (Alexander Polyhistor's account) who make their awed and thankful beneficiaries want to be sick with revulsion.

And what is more, the tradition admits this freely! (Chapter 9).

To strengthen his case, Mr. Temple points out that the Dogon also believe they were descended from people taught by creatures sharing the same amphibious and unworldly description.

In our previous post on the subject, we argued that intervention from extraterrestrial beings is a far more likely possibility than that mankind emerged from ages of progress out of very primitive conditions and suddenly displayed evidence of understanding the size and shape of the earth with great precision, ability to construct massive stone monuments with such engineering ability that they are still standing today (incorporating stones the size of which would be difficult to move with all our modern equipment), and detailed knowledge of the mechanics of the astronomical sphere which would take centuries of careful records and an understanding of fairly advanced mathematics to perceive.

However, we also noted that there are reasons to believe that the details recorded by Berossus, like the vivid stories in the myths of the ancients, were actually sophisticated metaphors meant to preserve scientific knowledge, but that they were not really meant to be understood in a literal sense. We cited an eloquent assertion of this very fact by Robert Temple himself, who noted that the myths did their job so well that their message was often preserved by subsequent civilizations who did not understand the hidden information encoded therein. It is at least possible that much of what Berossus discussed falls into this same category (after all, he was a priest of Marduk, the Babylonian Jupiter, and the priests of antiquity were known for keeping secret the true meaning of the ancient tales).

In fact, in the appendices in which Robert Temple provides for reference the translated versions of the many ancient historians who cite Berossus, there are passages in which he relates the reigns of Chaldean kings, some of whom reign for "ten sari" and others for "eighteen sari" -- and then we are told that "a sarus is esteemed to be three thousand six hundred years." Certainly the reader is not meant to understand that Berossus was recording the literal reign of a king that was 36,000 years long, or the even more unbelievable 64,800 years long? If not, then why are we compelled to believe that the description of the Oannes are meant to be understood as literal?

In fact, these numbers, and the reigns of all the kings together, appear to be highly symbolic of celestial information that Berossus was encoding for posterity. Others have pointed out that the king lists of Berossus add up to significant precessional numbers, particularly the frequently-appearing number 432,000.

In her 1992 book Death of Gods in Ancient Egypt, Jane B. Sellers notes:

Further, mythologist Joseph Campbell believed that in a Sumerian King List compiled in 280 BC by the Babylonian priest Berossos, the number '432' was a number of special significance. (Berossos gives 432,000 years as the sum of the years reigned by Sumerian mythological kings, and 432,000 as the 'number of the eon.')

When 432 is multiplied by a soss, (60, the basic unit of the Babylonian number system), it yields 25,920, the Great Year, and Campbell believes that this number (25,920) was to be hidden and imparted only to the initiates in the mysteries of the Universe. 188.

It is quite possible, then, that the information related by Berossus is meant to encode celestial knowledge of great importance and secrecy, and that the discussion of the Oannes who came down from heaven to impart civilization to mankind, and who dwelt half the time in the sea, may have a celestial message as well (and indeed, in Appendix 33 of Hamlet's Mill, published in 1969, Giorgio de Santillana and Hertha von Dechend make that exact argument).

Whether the Oannes cited by Robert Temple represent a literal description of extraterrestrials or a coded mythological transmission of advanced celestial and astronomical knowledge, either conclusion causes serious problems for the conventional understanding of ancient human history. The subtle motion of precession is believed by conventional historians to have been first perceived by mankind after the time of Berossus, but his king lists are just one of many examples (many of them far more ancient) which indicate that the very first civilizations we know of already understood it and encoded it in their mythologies and monuments.

To add further fuel to the fire, the Oannes-figures -- whatever they represent -- appear to constitute evidence for ancient cultural contact between the "Old World" and "New World" (so-called) as well. In his 1995 text, Fingerprints of the Gods, author Graham Hancock argues that certain monumental art found in the Americas appears to contain symbolic references to the story of the Oannes. Describing a massive red sandstone figure in the mysterious South American site of Tiahuanaco, a figure known as "El Fraile" or "the Friar" (shown above), Mr. Hancock says:

From the waist down the figure appeared to be clad in a garment of fish scales, and, as though to confirm this perception, the sculptor had formed the individual scales out of rows and rows of small, highly-stylized fish-heads. The sign had been persuasively interpreted by Posnansky as meaning fish in general. It seemed, therefore, that El Fraile was a portrayal of an imaginary or symbolic 'fish-man.' The figure was also equipped with a belt sculpted with the images of several large crstaceans, so this notion seemed all the more probable. What had been intended?

I had learned of one local tradition I thought might shed light on the matter. It was very ancient and spoke of 'gods of the lake, with fish tails, called Chullua and Umantua'. In this, and in the fish-garbed figures, it seemed that there was a curious out-of-place echo of Mesopotamian myths, which spoke strangely, and at length, about amphibious beings, 'endowed with reason' who had visited the land of Sumer in remote prehisotry. The leader of these beings was named Oannes (or Uan). [. . .]

We have discussed the other extensive forms of evidence which argue for ancient contact between cultures across the oceans, many of which are linked in this previous post.

It is clear that the knowledge contained in the writings of Berossus, cited by numerous other ancient authors, was extraordinary. While I believe there are reasons to argue that it was not necessarily meant to imply actual descriptions of extraterrestrial beings, it clearly contains important clues which (along with scores of other pieces of evidence) strongly refute the conventional timeline of mankind's ancient past.