Go have a look at the Pleiades! 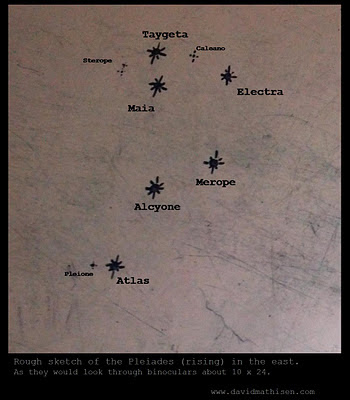 If you make a habit of going out for a walk to look at the stars at about the same time each evening, you will begin to notice over the course of a few months how the sky changes slowly through the seasons as a result of the earth's ongoing progress in its orbit around the sun (explained here using the metaphor of the walls of your dining room at home).

Currently, the stars rising in the east in the evening before midnight include some distinctive and easily-recognized constellations, and best of all the beautiful Pleiades, one of the most famous and most important star clusters in the sky (important because of their prominent role in ancient mythology and astronomy).

You can easily locate the Pleiades in the evening hours, rising in the east and clearly visible well above the horizon by 9 pm (currently rising above the horizon just before 7 pm in latitude 35o north). To find them, it is advisable to first locate Cassiopeia, which is the "W-shaped" constellation that circles the north star opposite the Big Dipper and which should be fairly easy to find in the east (between the hours of 8 pm and midnight in the northern hemisphere, it will be oriented as shown below in the drawing). 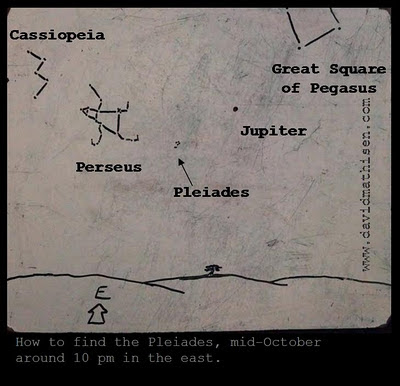 Once you have located Cassiopeia, then proceed to the constellation Perseus, which will be oriented as shown in the diagram above for viewers in the northern hemisphere (remember, he is rising in the east and thus looks horizontal as he rises, straightens up as he crosses the zenith, and then becomes more horizontal as he sets -- Orion does the same thing). You may not be able to recognize all the stars show above in the Perseus diagram, but you should be able to make out the main trapezoidal stars of his body and probably his arms and maybe his legs as well (on a clear night). For more discussion of the constellation Perseus, see this previous post.

Once you have located Perseus rising, you are ready to find the Pleiades. They are very close to his lower foot, and when he is horizontal like this they are on his same level (once he straightens up he will be above them and above the constellation of Taurus the Bull, which is important for the analysis of the ancient Mysteries of Mithras offered by Professor David Ulansey and discussed here; for more detail check out his excellent book Origins of the Mithraic Mysteries: Cosmology and Salvation in the Ancient World).

The Pleiades are a beautiful silvery cloud when viewed with the naked eye (depending on your vision, you may be able to make out several of the individual stars of the Pleiades). However, they are even more breathtaking when viewed through binoculars. The diagram at the very top of this post shows about what you can see with an ordinary set of binos, except that it will be far more beautiful. The names of each Pleiad are identified in the illustration, as are the locations of their parents, Atlas and Pleione.

Now is a fantastic time of year to go find the Pleiades. The moon is rising later and later each night and currently does not come onto the scene until just after midnight at latitude 35o north, so late evening after 8 pm gives you several hours to observe the dazzling array of stars in the eastern night sky.

Currently, the brilliant planet Jupiter is rising in the east at roughly the same time as the Pleiades, and is shown in the diagram above. Also, much higher in the sky and indicated in the diagram, look for the Great Square of Pegasus, discussed in this previous post.

You absolutely owe it to yourself to go out and spend some time enjoying the beautiful Pleiades this week. They are spectacular.

Bring along a pair of binoculars (some tips for using binoculars to observe celestial objects can be found here).

Posted by David Warner Mathisen at 12:03 AM