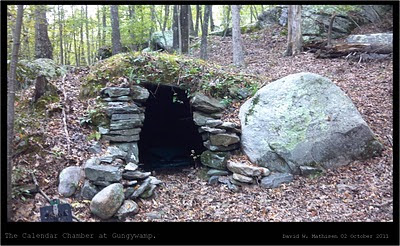 In previous posts, we have discussed the extensive evidence which strongly supports (we might almost say "clearly confirms") the theory that ancient civilizations were capable of crossing the Atlantic and Pacific Oceans and that members of ancient civilizations from Europe, Africa, and Asia carried on extensive contact with the Americas and probably lived there as well.

This evidence comes in many widely varying forms, which makes it more difficult to attribute to wishful thinking or to later forgery. Some of the evidence is in the form of clear mythological parallels in mythologies from cultures separated by the oceans, parallels that are very difficult to attribute to coincidental development in complete isolation (see for example here and here).

Some of the evidence is in the form of archaeological connections between massive structures such as pyramids (discussed for example in this blog post).

Some of the evidence is in the form of sculptures accurately and artistically depicting individuals of ethnic types that should not have been known in the Americas according to conventional theories (see for example here and here -- and there are so many more that this form of evidence becomes very difficult to ignore or to explain with the ridiculous assertion that these sculptures were simply artistic flights of fancy that accidentally resembled men the artists knew nothing of and had never seen).

Some of the evidence is in the form of writing systems that are known to have been used in the Old World which appear to show up in the New World (see here and here).

Yet another form of evidence, very different from the most of the above examples, comes in the form of stone chambers, stone circles, and stone markers found in the Americas which parallel very closely similar stone structures built in Europe and typically associated with the Celts and the Druids. We have touched on the existence of such North American stone monuments previously, in posts such as "Magnetic polarity at Avebury Henge" and "What are cross-quarter days?"

There are literally hundreds of these in North America, including many in the United States, many of which are discussed (with photographs) in America BC: Ancient Settlers in the New World, by Barry Fell.

One of these fascinating sites is Gungywamp, located in Connecticut. The term itself (which almost sounds like something out of Australia, but which is apparently Native American in origin) is pronounced with the initial "g" hard and the second "g" soft. Barry Fell spells it "Gunjiwaump" in the caption to a photograph from the site on page 201 of his book, and his index (which may have been prepared by a different person) spells the word "Gunjiwomp," both of which more closely indicate the spoken pronunciation. Locals in the area seem to pronounce the final syllable more like "wump," although this may have something to do with the typical northeastern accent (my good friend and West Point classmate from Boston refers to the fast-food restaurant Popeye's as "Pup-eye's," which sounds very strange but which is linguistically identical to the pronunciation of "Gungywamp" as "Gungy-wump").

Because there is no instrument known today which can be pointed at a stone structure and tell us when the stones were placed on top of one another, the origins of the structures at Gungywamp remain a mystery and a controversy. It is quite certain that their construction resembles that used in Celtic stone chambers found in Europe and the British Isles. Also, the existence of celestial alignments tends to argue against the conventional explanation that the stone structures found in the northeastern United States are all colonial constructions meant to house vegetables, beer, or sheepskins. It is certainly possible that colonial beer cellars could accidentally line up with celestial events, but the fact that time after time these chambers are found to contain celestial alignments (chambers built in widely varying locations) argues against coincidence.

At Gungywamp, for example, there is a magnificent chamber mound -- pictured above -- known as the "Calendar Chamber," the entrance to which is oriented to the east and which contains a "light-box" or stone-framed aperture in the rear which admits the light of the setting sun on the afternoon of the equinoxes. The square of light which enters the chamber on those days illuminates a distinctive recessed side chamber (which is small and low to the ground on the right when you enter the Calendar Chamber).

Like the much larger passage mounds of the Boyne River Valley in Ireland which were described by Martin Brennan in his must-read book The Stars and the Stones, the Calendar Chamber is covered with dirt (and is almost invisible from any angle except from the front). The ceiling slabs are massive and completely flat on the bottom, and they span the entire distance from wall to wall, fitted together with an impressive degree of skill. Some excellent diagrams and drawings of the Calendar Chamber can be found on the "Gungywamp Virtual Tour" website, towards the bottom of the long web page.

A nearby chamber, much smaller, apparently was not discovered until fairly recently in 1950, when a hurricane knocked down a tree, exposing the entrance to the chamber which had been buried beneath the roots. This chamber, referred to by some authors as "The Tomb" and by others as "The Ice House" (under the theory that it was meant to keep beer cool) faces to the south. The descending afternoon sun can be seen between the trees in the photograph below, taken on the 2nd of October 2011 and thus about nine days after equinox. The beams from this descending sun are heading towards the light-box aperture of the Calendar Chamber, which is located only 30 or 40 feet to the east of this smaller chamber. 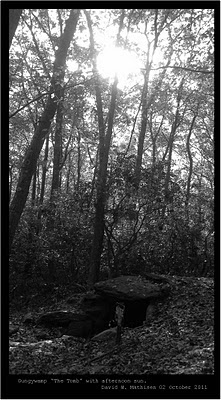 Like the Calendar Chamber, this smaller chamber has impressively large slabs forming the roof, and the stone which forms the inward-leaning right wall is also quite large and probably weighs at least 500 pounds.

Near both this small chamber and the Calendar Chamber is a beautiful and justifiably famous stone circle, an image of which can be found on Wikipedia and another photograph of which can be found in Barry Fell's America BC. It is uphill and north of the smaller chamber, and it is west and a little north of the Calendar Chamber. Below is a photograph of the stone circle taken from the south looking to the north. 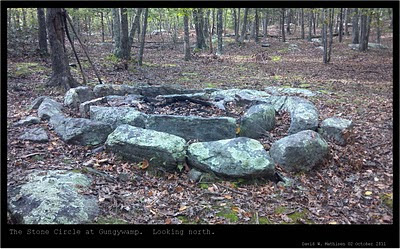 It is indeed possible, and in fact highly likely judging by the similarity to ancient Celtic sites in Europe, that Gungywamp is very ancient and possibly important evidence of ancient trans-Atlantic contact. By any estimation, it is a true "world heritage site" containing historic evidence of bygone cultures which should be respected and preserved.

Sadly, like so many of the stone structures scattered throughout North America, it is not protected and is subject to desecration at the hands of vandals. When one sees the garbage left there, and the evidence of campfires right among the ancient stones, the secrecy that surrounds the exact directions to this archaeological treasure becomes understandable.

The fact that the academic and conventional historical community stubbornly refuses to consider any explanation for these sites that includes ancient civilizations from other continents dooms these areas to obscurity and discourages their examination by large numbers of talented thinkers who might otherwise contribute some valuable perspectives to their study. Even though there are many such sites that have been photographed and written about, there are no doubt many more which are unreported by landowners who see no benefit to talking about them, but who see several disadvantages to doing so (especially when reporting their existence invites disrespectful trespassers who deface the ancient sites and leave their junk and charred firepits all over the area). It is also a sad reality that many of these ancient stone sites have no doubt been dismantled over the centuries to furnish materials to build other structures, to clear farmland or grazing land, or simply to get them out of the way.

The cavalier treatment these important sites have received from an academic and archaeological community that jeers at any explanations other than the approved solution is a true disservice to those who wish to pursue the truth. Typical of the dismissal that alternative explanations receive are the disclaimers on the website of the Gungywamp Society, which declares:

While it is certainly possible that the authors of the above sentences don't actually believe their own statements but instead are mainly trying to discourage visits from those who might leave the Gungywamp site in worse condition than they found it, if that is the intent, I would venture to guess that such statements probably do little to discourage those who vandalize and damage the place.
If, however, those pronouncements represent the true feelings of the Gungywamp Society, which calls itself an "educational research organization," then it is sad that they are so close-minded and so ready to slam the door on valid possibilities such as ancient Celtic or Phoenician presence on these shores, when it is quite obvious that nobody has proven anything about the origin of the structures at Gungywamp and the hundreds of other such sites in the New World.

In this situation it is perhaps appropriate to close by repeating the quotation by Edgar Smith Craighill Handy, cited approvingly by Thor Heyerdahl in 1953: "There is such a variety of possibilities open in the matter of relationships and derivations that my own feeling is that there is only one sure way of being in the wrong, and that is by asserting dogmatically what is not true" (cited in American Indians in the Pacific 8).

Posted by David Warner Mathisen at 5:53 AM