Reflections after a 20-year reunion 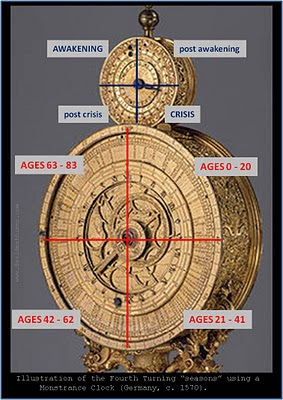 As we have noted in previous discussions, the authors of the 1997 text The Fourth Turning argue for a more cyclical approach to studying history in contrast to the very linear and progressive approach that dominates much of what is ingrained in our thinking from grade school upwards ("progressive" in that we are generally given a picture in which progress is seen as a given and the whole sweep of human history is painted as a slow and fairly steady climb from primitive to modern, with us at the top).

I am sympathetic to this argument because I have argued that the linear approach to history may well turn out to be both wrong and dangerous (see for instance the discussions in this previous post and this previous post), and because I believe this linear approach is a byproduct of the cult-like Darwinian mentality which crept into nearly every branch of academic inquiry beginning in the late 1800s and tainted almost every model that was adopted from that time forward (including the geological models that we take for granted today).

Note that the authors of the Fourth Turning do not assert that they are against Darwinism or that they believe there were extremely advanced ancient civilizations -- these are positions asserted in this blog and in the Mathisen Corollary book -- but the work that they have done detailing cycles and asserting the validity of a more cyclical approach to history and the dangers in the dominant linear and progressive approach opens up valuable new perspectives for those who are interested in the subjects treated in the Mathisen Corollary.

In their book, authors William Strauss and Neil Howe explain that there is a connection between the four generational patterns that they find recurring throughout the ages and what they call the "saecular rhythm of alternating Crises and Awakenings" that they find repeating roughly every 100 years (Strauss and Howe, 70).

The authors note that roughly every hundred years, a pattern of four stages tends to play itself out between Crisis and Awakening, with a post-Crisis and post-Awakening period after each Crisis and Awakening. They observe that every fifty years or so, a world-defining Crisis tends to erupt, in which the direction and even the very existence of a civilization is challenged. They identify World War II as the most recent of these, and note that based on their research we are about due for another one (which they predicted would arise between 2005 and 2025).

Conversely, they identify the opposite of a Crisis as an "Awakening," and identify the period of the 1960s and 1970s as the most recent of these (we have discussed some of the musical artists who were influential during that period, and also noted that the concept of the "Age of Aquarius" is of course directly related to the precession of the equinoxes, which is explained in numerous previous posts such as this one).

Connected to this cyclical pendulum swing between Crisis and Awakening, according to Strauss and Howe, is a cycle of generations which are profoundly impacted by their experience and stage of life during the Crisis or the Awakening. For example, one generation is below the age of twenty during a Crisis, and will be shaped by watching it from the general vantage point of childhood -- think of those too young to fight during World War II, for instance (of course, many fought as young as sixteen during that conflict, but these are general age groupings, not hard and fast lines). Another group was in their prime years of young adulthood (roughly from 21 to 41) during World War II and were thus shaped quite differently by the experience. Those between the ages of 42 and 62 are generally at a different stage of life -- they are generally directing the efforts of those young adults in the generation behind them, since those between 42 and 62 are in the years in which they generally hold the reins of power.

When this Lost Generation begins to enter young adulthood (ages 21 to 41) and the generation that was in young adulthood during the Awakening moves into positions of power and world leadership, there is a period that Strauss and Howe call an "unraveling" which precedes the next Crisis. According to Strauss and Howe, this was the period that we have been moving out of and the end of the unraveling is characterized by intense discontent, distrust of institutions, pessimism and lack of confidence -- all of which describes the present time quite accurately.

In the image above, I have attempted to illustrate the interconnected cycle-patterns that Strauss and Howe describe using an image of an old "Monstrance clock" or "mirror clock" from the 1500s, which had two interconnected dials to indicate the time. We can think of the upper dial in this illustration as showing the "saecular" cycles that Strauss and Howe identify (they use the term and the spelling to indicate a period of roughly a hundred years, and note that this concept goes back to the ancients). We see that this dial moves from a Crisis to a post-Crisis period (Strauss and Howe call this period a "high") and then into an Awakening followed by a post-Awakening period (Strauss and Howe call this an "unraveling").

We can see what Strauss and Howe mean more clearly by thinking of specific individuals who have lived through these different periods during the past 100 years of history, such as John F. Kennedy, who was in the Hero generation that served as the fighters during World War II (ages 21 to 41 during that conflict) and then moved into positions of primary leadership during the post-Crisis "high."

I recently had an opportunity to reflect on this entire model of cycles as I attended the twentieth reunion of the graduating West Point Class of 1991 (which explains the lack of posts over the past several days). In the brass clock pictured above, a twenty-year reunion for a West Point class falls pretty close to the point at which the marker is moving from young adulthood (ages 21 - 41) to midlife (ages 42 - 62) in the stages identified by Strauss and Howe. Returning to the familiar landscape of West Point provides the chance to "turn the dial back" twenty years and consider things that were said and done at the entry to young adulthood, and to perceive just how different one is at 41 or 42 from the person who was doing and saying those things at the age of 21 or 22.

Meanwhile, it is sobering to consider just how the upper dial has moved from where it stood in the years my class was at West Point (from 1987 to 1991). At that time, the cycle that Strauss and Howe believe is ending now was just getting underway. The first members of the Baby Boom generation were just preparing to enter the positions of greatest power on the world stage (for example, Bill Clinton became the first member of the Baby Boom generation to become the President of the United States during the election of 1992).

According to Strauss and Howe, the same twenty years that have moved my West Point class to the beginning of a new stage of life have also moved the upper dial to the brink of a new saecular turning, which they predict will be a Crisis.
Posted by David Warner Mathisen at 6:12 PM