The Age of the Sphinx 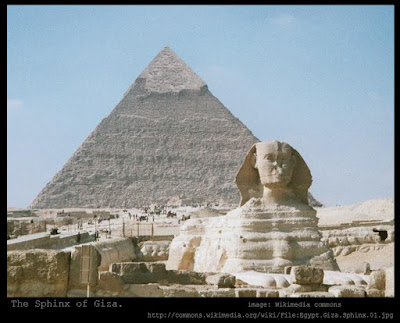 Here's a link to a recent article entitled "The Sphinx Decoded?" by Matt Patterson, reviewing a book released at the beginning of 2009 by Robert and Olivia Temple entitled The Sphinx Mystery: The Forgotten Origins of the Sanctuary of Anubis.

In their text, the Temples argue that the Sphinx underwent numerous revisions throughout antiquity, and that it originally was not designed as a lion with the head of a man but rather as a massive jackal, representing the Egyptian god Anubis.

As the review by Matt Patterson linked above explains, the Temples discuss the evidence of water erosion on the body of the Sphinx. This matter is one of extreme import to the age of the Sphinx, as it suggests that the sculpture may have been there long before dynastic Egypt. Previous theorists have argued that the presence of massive water erosion around the Sphinx, so uncharacteristic of the erosion found on almost all other monuments from ancient Egypt, argues that the Sphinx is a remnant of a far older era, before dynastic Egypt, when the climate was far different and far less arid than the climatic conditions that now prevail and which are thought to have generally prevailed during dynastic Egypt as well.

While the argument put forward by the Temples that the original shape of the Sphinx may have been a jackal is interesting and worthy of discussion, the question of the source of the distinctive erosion on the Sphinx is far more important, because the answer to that question has tremendous import for many issues of mankind's most ancient past. Rejecting the "ancient rain" hypothesis that dates the origins of the Sphinx in an extremely ancient, pre-dynastic Egypt, Robert Temple instead argues that the sculpture was carved during early dynastic Egypt but that the Egyptians deliberately filled pit around the Sphinx with water diverted from the Nile, and that periodic draining of this moat or pool (to rid it of the sand that the desert winds would deposit there) would have produced the deep vertical fissures in the body of the sculpture -- water erosion, but due to man-made causes rather than to rainfall.

To grasp the importance of this debate, let us turn to the masterful discussion of the ancient rainfall theory found in the 1979 book by John Anthony West, Serpent in the Sky (a work of tremendous import covering a host of vital and interrelated subjects, some of which we have touched on in previous posts such as in this post, this post, and this post). Mr. West steps off into this examination based upon an observation by R. A. Schwaller de Lubicz (1887 - 1961), who remarked "that the severe erosion of the body of the great Sphinx of Giza is due to the action of water, not of wind and sand" (in the words of Mr. West, 198).

Mr. West explains that this single observation may hold the key to unlocking the question of the origins of Egyptian civilization -- a question that is much thornier than conventional historians would have us believe. In fact, it is a question of tremendous import, and Mr. West lets us feel the full weight of the problem as he explains it in the runup to his examination of the weathering of the Sphinx:

Egyptologists postulate an indeterminate (and indeterminable) period of 'development' prior to the First Dynasty. This assumption is supported by no evidence; indeed the evidence, such as it is, appears to contradict the assumption. Egyptian civilisation, taken field by field and discipline by discipline (even according to an orthodox understanding of its achievement), renders unsatisfactory the assumption of a brief development period. The much vaunted flowering of Greece two thousand years later pales into insignificance in the face of a civilisation which, supposedly starting from a crude neolithic base, produced in a few centuries a complete system of hieroglyphics, the most sophisticated calendrical system ever developed, an effective mathematics, a refined medicine, a total mastery of the gamut of arts and crafts and the capacity to construct the largest and most accomplished stone buildings ever built by man. The cautiously expressed astonishment of modern Egyptologists hardly matches the real magnitude of the mystery. 196.

If it turns out that the Sphinx and a few other monuments (perhaps the massively megalithic Valley Temple and Sphinx Temple at Giza, and the mysterious Oseirion at Abydos, for instance) are in fact the products of a predecessor civilization -- a very advanced predecessor civilization -- then the mystery would be solved, although not in a way that is satisfactory to the conventional historians. In that case, the dynastic Egyptians would have been heirs to most of the amazing technologies (including their system of writing, their advanced understanding of mathematics and astronomy, their advanced medicine, their ability to construct massive stone monuments, and even their apparent understanding of the size of the spherical earth) that they displayed from the very earliest Old Kingdom records.

Thus, the alternative proposed by the Temples is important. At least it acknowledges the existence of erosion caused by heavy water flows on the Sphinx -- something that conventional historians and Egyptologists often deny (since to admit it requires some very difficult explanations, none of which are particularly amendable to the traditional storyline). However, there are some possible problems with the "artificial moat" explanation of the Temples.

Most notable of these is the presence of apparent water erosion on other structures that appear to be different in construction and older than the typical monuments of the dynastic period, such as the Valley Temple, the Sphinx Temple, and the Oseirion or Osirion at Abydos. While it is difficult to imagine that the Sphinx was carved out only to be submerged up to the neck, it is even more difficult to imagine that these other temples were also deliberately submerged, since that would make them completely inaccessible.

Again, it is commendable that the Temples are examining the evidence and putting forth theories, and that they are not afraid to challenge conventional timelines: the discussion is worth having and the more minds that are brought to bear on the question, in my opinion, the better it is for everybody.

In this case, I tend to side with those who believe the evidence for water erosion indicates a pre-dynastic age for the Sphinx and the megalithic temples at Giza and Abydos, and that this is every bit as significant an issue as John Anthony West describes it as being in the passage cited above. However, I do not agree that the presence of rain erosion necessarily pushes the date of the construction of the Sphinx and the other older structures back to periods as early as 9,000 BC (a date given by Dr. Schoch on his website) or even 10,000 BC to 15,000 BC (dates given by Mr. West in his book, pages 198-199).

As Mr. West is careful to point out, this question comes down to what geological model one follows, and what assumptions underlie that geological model. He makes the very accurate statement that while "in geology, as in so many scientific and scholarly disciplines, popular works intended for the general reader convey an impression of serene scholarly unanimity" in fact the real situation is far different (199). This is an extremely important point and one that of course is in perfect accord with the assertions of this blog and those in the Mathisen Corollary book regarding the problems with conventional theories of geology.

In fact, according to the hydroplate theory of West Point and MIT graduate Dr. Walt Brown, there would have been a period of elevated rainfall immediately after a cataclysmic global flood event, when the waters had run off of the thickened continents, and the seas were warmer due to the energy that had been released during the violent sliding of the hydroplates. Previous posts which touch on this subject include this one about the unfrozen lakes in Antarctica and the events surrounding the postflood Ice Age.

Perhaps this postflood precipitation was responsible for the water erosion found in the very earliest predynastic Egyptian monuments (if indeed they are predynastic, which appears to be quite likely). If so, it means that humans survived the flood, and that those humans carried with them tremendous knowledge, since it means that they were able to construct the massive structures that remain to this day and to do it in the centuries immediately after the flood.

This possibility, of course, completely upends the Darwinian assumptions about mankind's ancient past that have gained such a stranglehold on academic thought over the past one hundred years that any examination at odds with the Darwinian party line is treated as heresy and viciously suppressed and ridiculed. However, as the above discussion makes clear, the evidence appears to support a variety of possibilities: the only possibility that doesn't seem to have much going for it is the one that is still being forced down everyone's throats.
Posted by David Warner Mathisen at 8:55 PM