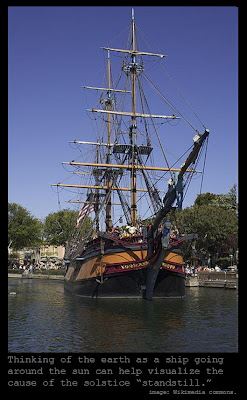 Many people are aware of the fact that the word "solstice" means "sun stand-still" or "sun stationary," but may not understand exactly why the sun seems to come to a standstill at each solstice before turning around and starting towards the opposite solstice.

The word itself is composed of two words from Latin, sol (which obviously refers to the sun and gives us the word "solar"), and sistere (the Latin verb meaning "to stand," found in words like "resist" and also in less widely-used modern words such as "interstitial," meaning "occupying a small or narrow place in between two other spaces," which is a synonym for the equally obscure but interesting word "liminal," which has to do with things occupying a boundary area between two other areas and comes from the word for "a threshold," and which can metaphorically apply to concepts that occupy a "third space" between two binaries or polar opposites).

Many discussions of the solstices mention the fact that the sun's rising point (and setting point) moves back and forth along the eastern (and western) horizon during the year, and that the solstices mark the furthest north and furthest south points along that annual path. These discussions may also mention that the sun appears to pause at each of these two "turnaround points" and rise (and set) there for a few days in a row before moving back in the other direction. Why does the sun linger at the solstices, when it does not linger at the equinoxes, for example?

To conceptualize why this important "standstill" takes place at each solstice, it is helpful to think of the earth as an old sailing ship from the classic days of sail (such as the full-scale model of the Columbia Rediviva pictured above -- the original Columbia being the first US ship to circumnavigate the globe, in 1790).

In this "earth-ship" metaphor, the bowsprit (that spar which extends forward from the vessel's prow, right above the figurehead) represents the north pole of the earth. The lantern which hangs from the ship's stern (not visible in this photograph) would represent the south pole of the earth. 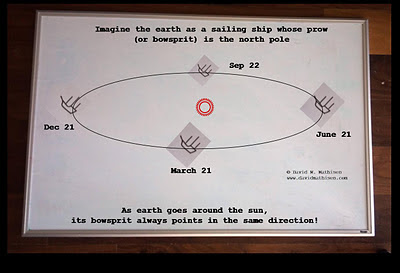 The ship in the above diagram is shown without all the rigging, for simplicity, and it is angled to show the earth's obliquity to the ecliptic plane. Also, if this ship were really the earth, it would be rotating along the axis of the bowsprit once per day, which would make all the sailors on it quite uncomfortable and perhaps even a bit seasick, but for the purposes of this analogy we can imagine that the ship is not rotating like that. The important point to notice is that the bowsprit stays pointing in the same direction all the time as it goes around.

The summer solstice for the northern hemisphere is when that bowsprit is directly pointed at the sun as the ship sweeps by on its rotation. In fact, there is one moment in time at which that bowsprit will point most directly at the sun, and that moment in time will fall somewhere around the calendar date of June 21. The aft or stern of the ship will then be pointing most directly away from the sun, and thus it will be winter solstice to those in the southern hemisphere.

Likewise, there will be one moment on the other side of the orbit at which the lantern in the stern of the ship will point directly at the sun (when the bowsprit is pointing directly away). This moment in time will fall somewhere around the calendar date of December 21 -- we just passed it a couple days ago, in fact. This point will be the winter solstice for those in the northern hemisphere, and the high point of summer for those in the southern hemisphere.

Halfway between these two points, the ship will drift past the sun with the bowsprit and stern lantern aligned with the motion of the ship, and the sun will be "broadsides" to the ship. These two points (when the ship passes by the sun such that it is directly broadsides) will be the equinoxes.

Now, to understand why the sun appears to "pause" or "linger" or even "stand still" at each solstice, while it does not do so at the equinoxes, think of yourself as an observer tied to the bowsprit of the ship (or occupying the position of the figurehead, if you prefer). As the ship approaches the solstices, your view of the sun will be directly in your face as you pass by it at the solstices, and it will not appear to move very much as you stare at it while the ship moves along its orbit in a motion that is almost lateral to the sun.

However, as the ship gets past these points and starts to race down the track towards the next equinox, your view of the sun will start to change rather rapidly. As you get going, your face will be pointing, not at the sun, but towards the direction that earth is moving on its orbit. You will literally "whiz by" the sun at the equinox, and its motion will be quite rapid as you pass it by.

As you approach the next solstice, however, your perspective will again begin to change, and the speed of the sun's passing will seem to slow down again, until it becomes slowest on the days surrounding the solstice itself.

If you have a more mathematical sort of mind and prefer to examine this concept using a graph instead of a metaphor, you can think of the apparent motion of the sun throughout the year as a sinuous wave (like a sine wave) on a graph. We have seen in previous posts that the ecliptic actually traces out a sine wave as it moves up and down across the celestial equator during earth's progress around the sun (this back-and-forth motion of the ecliptic is discussed in this previous post, and a helpful animated video of the sun's noon point on the ecliptic moving up and down across the celestial equator throughout the year can be found here and discussed further here).

An excellent discussion which contains a good graph of the sun's path back and forth across the celestial equator throughout the year can be found here -- the entire page is actually discussing the concept of lunar standstill and in particular the major standstill of 2006, but the very first graph is a solar wave, and the discussion incorporates the sun's annual motion and is very well done and thorough.

Looking at the sine-wave-like graph of the sun's motion, you can also conceptualize why the sun "stands still" at solstices and not at equinoxes or other days between the solstices. The solstices are at the top and the bottom points of the wave. The vertical change on the graph slows down significantly as it approaches a top (or a bottom), and comes to almost a complete halt (nearly flat) at the actual top and bottom (the solstices and the days on either side of the solstices). However, as the wave begins to dive from the upper solstice down towards the lower one (or to climb from the lower solstice towards the upper one), the wave becomes much steeper. As it screams through the equinoxes, it is changing its vertical position quite rapidly from one day to the next.

You can verify this phenomenon for yourself by marking the sun's rising point on the horizon throughout the year. You can also use the handy calculations provided by the US Naval Observatory's outstanding website here. That calculator enables you to enter latitudes and longitudes and elevations (or cities in the US) and determine the rising times, rising azimuths, and setting times and setting azimuths, for various heavenly bodies (including the sun). The tables below show the rising azimuths for the sun from San Francisco, California during the days surrounding the fall equinox and the days surrounding the winter solstice, for the year 2011. 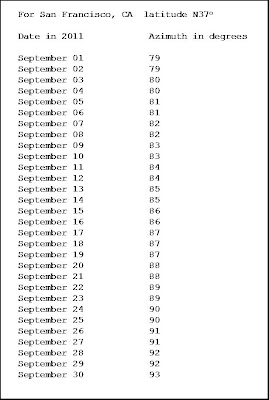 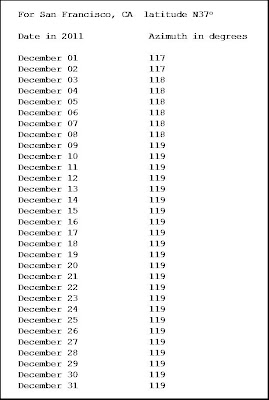 Note that the USNO data only gives whole number azimuths, but even so the difference in the rate of change is quite apparent. Note that during the month of September, as the earth approaches the September equinox point on its orbit, the rate of change is quite dramatic. The sun's rising azimuth changes a full degree every couple of days (note that it is rising north of due east -- due east being ninety degrees and true north being zero degrees -- as it approaches equinox, and then rises at ninety degrees at equinox, and proceeds south of due east after that).

However, during the month of December (as earth approaches the December solstice), the rate of change has slowed significantly. Now, the rising azimuth of the sun for an observer in San Francisco is much further south, at 117 degrees at the beginning of December (fully 27 degrees south of due east). As the earth progresses, it creeps south still further, to 118 degrees, and then to 119 degrees (which it reached on December 09 for an observer in SF). After that, it continues to rise at 119 degrees for the remainder of the month of December! What a difference from the rapid change of azimuth taking place around the equinox point on the orbit.

This discussion should help you understand the reason why the solstices are the "stationary" places of the sun during the annual rhythm created by earth's orbit and the tilt of earth's axis.