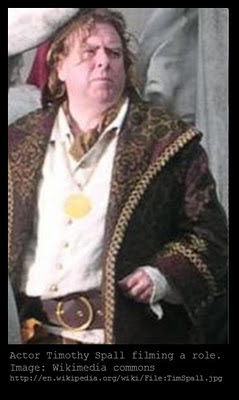 Not long ago I had the opportunity to view the movie The King's Speech, a movie which won Academy Awards for Best Picture, Best Actor (Colin Firth), Best Director (Tom Hooper), and Best Original Screenplay (David Seidler).

The movie tells the uplifting story of a man -- King George VI -- who overcomes a debilitating speech impediment and the limitations which others wished to impose upon him, through his own courage and through the friendship and perseverance of a creative and unorthodox speech therapist, Lionel Logue (portrayed by the talented Geoffrey Rush).

Just prior to the film's critical moment (the crucial radio address by the king in 1939 declaring a state of war with Hitler's Germany), the indomitable Winston Churchill provides the king with additional moral support when he states frankly that he himself has had to overcome a speech impediment, which, Churchill says, he turned into "an asset."

Not long after seeing that excellent film, I happened to be watching a movie I had seen literally dozens of times (since I have children who enjoy Lemony Snicket), A Series of Unfortunate Events (with the irrepressible Jim Carrey in one of his best performances ever, in my opinion), and only then did I realize that the stuffy Mr. Poe was portrayed by the same actor who turns in such a memorable Churchill in The King's Speech, Timothy Spall (who has played many other memorable characters in many other films -- he is seen above in the role of Nathaniel in the filming of the 2007 movie Enchanted).

It occurs to me that this phenomenon -- the recognition of an actor with whom we are familiar in one role when we see them in a different role and not recognizing them at first -- is a good metaphor for the theory put forward by Giorgio de Santillana and Hertha von Dechend in their groundbreaking 1969 work Hamlet's Mill. The thesis of that text is the allegation that an advanced ancient civilization -- understanding astronomy to a very sophisticated degree -- encoded their scientific knowledge of celestial mechanics in the memorable myths which have come down to us, told through the centuries by those who did not necessarily understand at all what esoteric knowledge was buried within.

In that essay, speaking of the planets (whose activities as they pass through the various constellations in different combinations and configurations generate the vast majority of the familiar stories of mythology) tell us:


But obviously there is more, and what emerges here lifts the veil of a fundamental archaic design. The real actors on the stage of the universe are very few, if their adventures are many. The most "ancient treasure" -- in Aristotle's word -- that was left to us by our predecessors of the High and Far-Off Times was the idea that the gods are really stars, and that there are no others. The forces reside in the starry heavens, and all the stories, characters and adventures narrated by mythology concentrate on the active powers among the stars, who are the planets. 177.

The point being made by de Santillana and von Dechend is that there are actually very few actors on the celestial stage -- in fact, there are really only seven -- but that among these seven, they take on just about all the varied roles found in all the various myths. Many times, they play several different roles within a single culture's mythology. For example, Hamlet's Mill explains that Prometheus, Hephaestus, Phaethon, and Kronos are all among the many manifestations of aspects of the planet Saturn. Likewise, Hercules, Ares and even Orion appear to manifest certain aspects of the planet Mars (and there are literally hundreds of other examples). Further, these same planets take on similar roles in the mythologies of other cultures (Mars appears as an impetuous strongman in mythologies from Central America to Japan, for instance).

When we watch contemporary movies and notice that certain actors seem to appear in roles that at first seem very different and even unrecognizable, but then in a flash we suddenly recognize the familiar actor, this experience is analogous to what de Santillana and von Dechend tell us is going on in mythology. The portrayal of Lionel Logue by Geoffrey Rush is very different from the role of Captain Barbossa which Rush created with such enthusiasm and verve in the Pirates of the Caribbean films, but there are similarities as well, such as a delight in language and the power of speech.

In fact, it turns out that the Series of Unfortunate Events in which Timothy Spall portrays such a memorable Mr. Poe may be an excellent example for understanding what de Santillana and von Dechend were driving at, because the film itself features a character (Jim Carrey's Count Olaf) who pops up in one disguise after another, incredibly different, but always recognizable after a few minutes of amazement by the viewer.

This analogy may be helpful to keep in mind when negotiating the difficult but rewarding text of Hamlet's Mill.
Posted by David Warner Mathisen at 11:37 PM