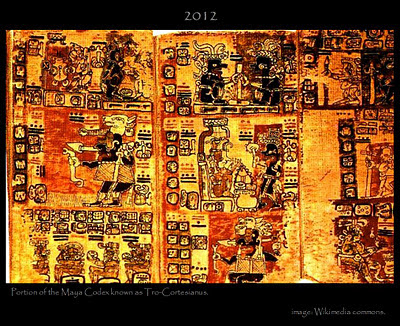 It's already 2012 in many parts of the globe, and soon to be 2012 in those longitudes that are still rolling towards the end of 2011.
The much-anticipated year of 2012 has gotten a lot of hype, primarily because the great cycle of the Maya "long-count" is scheduled to come to an end on December 21, 2012, and because of increasing media hype such as the sensationalistic National Geographic video shown below, entitled "2012: Countdown to Armageddon."

The Maya long-count cycle is discussed in many places on the internet, and reflects the advanced mathematical system that civilization possessed. Here is a brief description of the basics of the system from Chapter 7 of the Mathisen Corollary (pages 160-161 in the paperback version), which should help understand exactly what is supposed to come to an end on December 21 of this year:

The famous Maya long count was used for historic inscriptions and for calculating dates far into the past and the future. The system was elegant and simple, consisting of various periods of time which were indicated by their own glyphs; extremely large dates could be rendered by placing dots next to glyphs to indicate the numbers of the groupings (up to four, after which line strokes were used to indicate groups of five, with a zero symbol which could be used to indicate no units in that particular glyph-group). These groupings generally increased by factors of twenty (making the Maya long-count system a "base-twenty" system, or vigesimal system, as opposed to our "base-ten" or decimal system of numbering).

As many are aware today thanks to the great interest surrounding the end of this great long-count cycle, the Maya (whose civilization is though to have started as early as 2000 BC but which reached its Classic period between AD 100 and AD 900) began their cycle with the year that we would call 3113 BC -- "believed to be the year the Maya considered as marking the creation of the present world order," according to astronomer Edwin C. Krupp (b. 1944) in his 1983 work Echoes of the Ancient Skies: the Astronomy of Lost Civilizations (185). The great cycle of thirteen baktuns that preoccupied the Maya astronomers and historians so many centuries ago will reach its conclusion near the end of our AD 2012.

It is known that the Maya believed that the world had been destroyed several times before, as the narrators and interviewees in the above National Geographic video make clear. Some sources, such as the Popol Vuh, appear to indicate that we are living in the fourth "sun" or age, while others appear to indicate that the Maya believed we are living in the fifth sun already.

There is much more evidence contained in what the Maya have left us which is important for our pursuit of the answers to the mysteries of mankind's ancient past. Much of it is discussed in Graham Hancock's Fingerprints of the Gods. Much evidence is preserved in the spectacular Maya ruins, although much of it has been irrevocably altered by misguided modern "restoration" projects in recent centuries. In the notes he included in that book, Mr. Hancock points out the slight variations to the dates different scholars have determined for the end of the Maya long-count cycle (see page 517).

If the advent of the portentous year 2012 causes more people around the world to become interested in exploring the mystery of mankind's ancient past, and brings more minds with different backgrounds, life experiences and perspectives to bear on the study of these vitally important questions, then those ancient Maya inscriptions will have served a very important function indeed, in addition to all the other important information that they preserve and the other roles that they play.

I wish all of my readers everywhere a very Happy New Year!