The fossil whales of the Atacama Desert 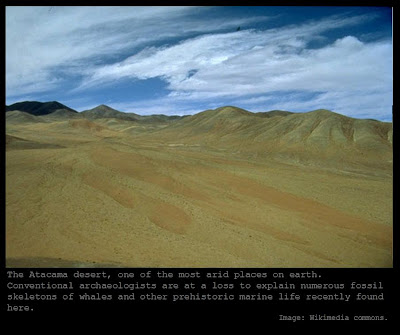 Scientists are at something of a loss to explain the recent discovery of beautifully preserved fossil skeletons of large whales and other ancient marine creatures in the Atacama Desert of Chile, one of the world's most arid locations.


In June of 2010, during a highway widening project that is now on hold, paleontologist Mario Suarez was called in to supervise and prevent damage to any fossils, which had long been known to be present in the area, according to this Associated Press article describing the site. However, he was astonished by what began to emerge: skeleton after skeleton, now totaling more than 75 whales, including at least 20 perfectly intact skeletons, most of them of baleen whales around 25 feet in length, plus at least one sperm whale.

"In the first week, about six or seven whales appeared," Suarez is quoted as saying. "We realized that it was a truly extraordinary site."

The location of so many fossilized marine skeletons in a single location -- let alone in the Atacama Desert -- has posed something of a challenge for scientists using conventional geological assumptions. Nick Pyenson, the curator of fossil marine mammals for the Smithsonian, says he believes that "they died more or less at the same time."

Some hypotheses that scientists have come up with so far to explain the massive graveyard include an ancient lagoon in which whales and other marine life gathered which was suddenly sealed off from the ocean by an earthquake or a storm, or a giant wave or tsunami which flung the whales onto the shore and well inland. Some have suggested that massive numbers of whales may have beached themselves for some reason and perished, although the location in the high desert more than a half mile from the current shoreline indicates major geological uplift since that time. Other scientists believe that the skeletons may have accumulated over a long period of time, although exactly how or why remains a mystery.

The first question which should be asked in considering these fossils (and all the other fossils around the world) is the question of how anything forms a fossil at all. Under normal conditions, whales which die in the ocean or on the beach do not form fossils -- their remains are completely decomposed by bacteria and chemical action.

The unusual conditions required to form fossils are discussed in this previous post, which notes that the vast majority of fossils around the world exhibit evidence of rapid burial under thick sediments, conditions which would have taken place during the events surrounding a catastrophic global flood as put forward in the hydroplate theory of Dr. Walt Brown.

Explanations which rely on gradual processes similar to those which we can see going on around us in "normal" non-catastrophic conditions (such as the idea that the whales were trapped in a lagoon which slowly evaporated and left a fossil graveyard) do not account for the fact that under such conditions no fossils would be expected to remain at all.

The hydroplate theory, however, accounts for massive flows of sediments, tons of which would have infused the floodwaters escaping at high velocity during the rupture event, sediments which would then have blanketed the earth and which would have become sorted by the process of liquefaction during the flood. This process would account for the geological strata found around the globe and the sedimentary rocks which hold the world's fossils, including the whales of the Atacama. It would also clear up the problem of human remains found in strata which conventional paradigms label as hundreds of millions of years old (which conventional researchers generally ignore but which have been found in great numbers in places around the world).

It is certainly possible that many great whales and other marine creatures were overwhelmed by the onslaught of sediment-infused water during such a catastrophic event, and that many of these fossil graveyards ended up at the forward edge of the sliding continental hydroplates which slid away from the original rupture towards the newly-created Pacific basin.

There are other indications of fossil whales along what was the leading edge of the continents sliding towards the Pacific, for instance in California. In September of 2010, for instance, crews contracted by the San Diego Zoo were in the process of digging a hole for a new water tank when they encountered the fossilized skeleton of an ancient baleen whale, which conventional archaeologists declare to be 3.5 million years ago (no doubt based upon assumptions that the sediments were laid down in successive layers over millions of years, rather than during a single catastrophic event). This video shows the San Diego whale skeleton being preserved and moved by paleontologists.

Further north in California, there are numerous fossilized whale remains in the wine country around Paso Robles. One winery, Whalebone Vineyard and Winery, takes its name from this fact, and features a fossilized whale skull near its tasting room.