An excellent website explaining the lunar nodes (with animation) 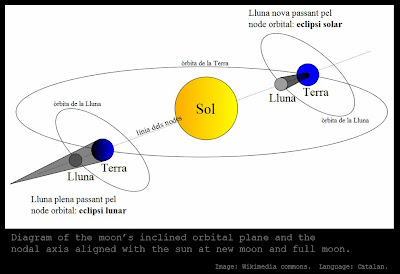 It contained a link to another previous post discussing these nodes in some detail, and arguing that the nine-world cosmology found in many ancient myths comes from the fact that the ancients tracked with great care the motions of nine wandering heavenly "bodies": the sun, the moon, Mars, Mercury, Jupiter, Venus, Saturn, and the two invisible lunar nodes (which are not actually heavenly bodies but which act like one when they temporarily swallow up the sun or the moon in an eclipse).

That previous post explained at length the somewhat complicated celestial mechanics whereby the moon's plane and the nodes move about 19.3o to the west each year, causing them to take 18.65 years to complete a full circle of 360o.

However, there is an excellent website which discusses these celestial mechanics with great clarity, and which illustrates the concept with absolutely outstanding graphics and animation -- perhaps the best so far for those wishing to understand the movement of the lunar nodes. To view it, visit "Eclipses and the Moon's Nodes," by Dwight Ennis, on the website of the Astrology Club of San Jose, California.

Thanks to Dwight Ennis for sharing his superlative illustrations and animations of eclipses and the lunar nodes with the rest of the world.
Posted by David Warner Mathisen at 11:33 PM