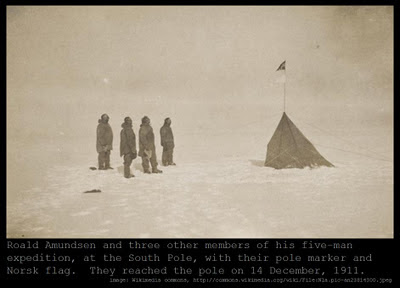 Above is one of only two photographs the expedition is known to have taken on their successful journey. They erected a tent and the flag of Norway at the pole and left a letter inside in case they did not make it back alive.

They did successfully make it back, reaching Framheim again on January 25, 1912. Their success would not become known to the world until the expedition landed in Australia in March that year. The British Antarctic Expedition, led by Royal Navy Captain Robert F. Scott, which had been racing to the pole at the same time, arrived at Amundsen's marker over a month later, in January of 1912, to bitter disappointment. Scott's entire party perished on the return journey.

Fifty years ago, at the fiftieth anniversary of the race to the pole, in a ceremony held at the South Pole, US Navy Rear Admiral David M. Tyree (commander of the US Naval Support Force in Antarctica from 1959 to 1962) said in his remarks that "Scott and Amundsen added to the sum of man's knowledge; more important, they added immensely to the sum of man's inspiration."

The continent of Antarctica is extraordinarily important in terms of clues that it holds regarding the ancient history of the earth and mankind's distant past. Most significantly, it contains clues which point to the fact that the earth experienced a "Big Roll" following the events of a catastrophic global flood. Some of these clues have been discussed in previous blog posts, including "Antarctica" and "Lake Vostok."

The fact that Antarctica is covered with snow and ice is also a remarkable clue which provides evidence supporting the hydroplate theory of Dr. Walt Brown. Today, Antarctica is one of the most arid places on earth, with less than six and a half inches of precipitation per year over the entire continent on average (qualifying as a desert, which are generally categorized as places receiving less than ten inches of rain a year).

Antarctica probably became glaciated during the Ice Age which would have followed the global flood, when oceans were warmer and continents were higher, creating the conditions for heavy precipitation which would have been in the form of snow and ice in many latitudes of the world, including of course the Antarctic. Evidence which suggests seafaring humans may have mapped Antarctica's coastlines before it became fully glaciated is contained in various "portolan" maps drawn in the early sixteenth century AD and almost certainly based upon much more ancient maps. This evidence is discussed in the previous post entitled "The subglacial fjords of Antarctica."

Previous posts discussing the achievement of the Amundsen expedition can be found here and here. To see a dramatization of the race to the South Pole in the 1985 television drama entitled The Last Place on Earth, see here.
Posted by David Warner Mathisen at 6:46 PM